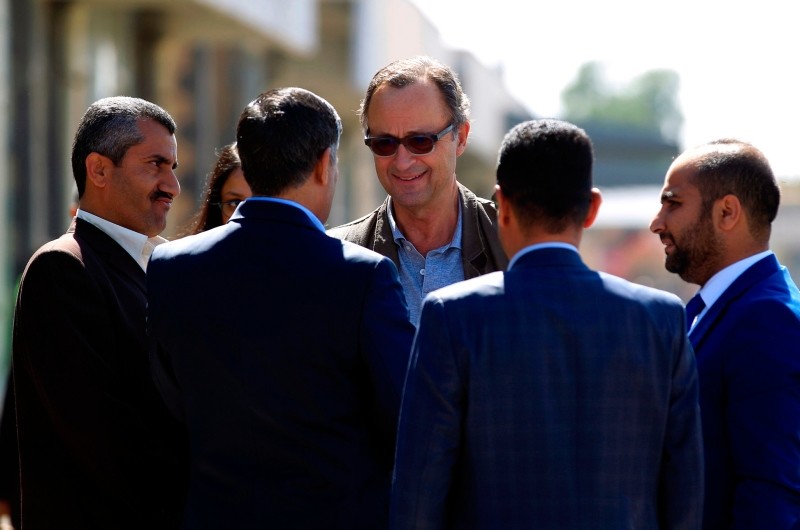 The head of the U.N. team tasked with monitoring a fragile ceasefire in Yemen's port city of Hodeida arrived in the rebel-held capital Sanaa on Sunday, an AFP photographer said.

Retired Dutch general Patrick Cammaert is heading a joint committee including members of the government and the Huthi rebels, in charge of monitoring a truce in the Red Sea city and its surroundings.

Cammaert was greeted by the head of the Huthi delegation, Ali al-Mushki, and a number of other members of the U.N. team at Sanaa international airport.

He is making a stop in Sanaa before heading to Hodeida, a lifeline port city that serves as the entry point for the majority of imports to war-torn Yemen, a U.N. official said.

On Saturday, Cammaert arrived in Aden where he held talks with Yemen government officials.

During those talks he urged Yemeni leaders and the Saudi-led coalition backing the loyalists to uphold the ceasefire that came into effect last week, said U.N. spokesman Stephane Dujarric.

He also "sought their commitment and cooperation to secure the unhindered flow of humanitarian aid", said Dujarric, adding that Cammaert will "convey similar messages" to the Huthis in Sanaa.

On Friday, the U.N. Security Council unanimously approved a resolution authorising the deployment of observers to Hodeida, which is held by the rebels and has been subjected to an offensive by pro-government forces.

Both the government and the rebels backed the resolution on Friday.

Rebel negotiator Mohammed Abdelsalam said it marked "an important step towards stopping the aggression and lifting the blockade".

He was referring to the Saudi-led military coalition that intervened in 2015 and imposed a blockade on Yemeni waters and airports.

The internationally-recognised government, in turn, reaffirmed in a statement its "commitment (to respect) the agreement" reached in Sweden and endorsed by the U.N. resolution.

It pledged to work "in a positive spirit" with U.N. envoy Martin Griffiths towards a lasting political agreement to end the war.

A halt to fighting in the strategic port city follows intense diplomatic efforts which culminated in peace talks earlier this month in Sweden, where the warring parties agreed to the truce which came into force on Tuesday.

The ceasefire remained shaky, however, with both sides accusing each other of violations in Hodeida province.

The U.N. monitoring team aims to secure the functioning of Hodeida port and supervise the withdrawal of fighters from the city.

It authorises the United Nations to "establish and deploy, for an initial period of 30 days from the adoption of this resolution, an advance team to begin monitoring" the ceasefire, under Cammaert's leadership.

Around 10,000 people have been killed since the Saudi-led intervention, according to the World Health Organization, although rights groups say the death toll could be five times higher.