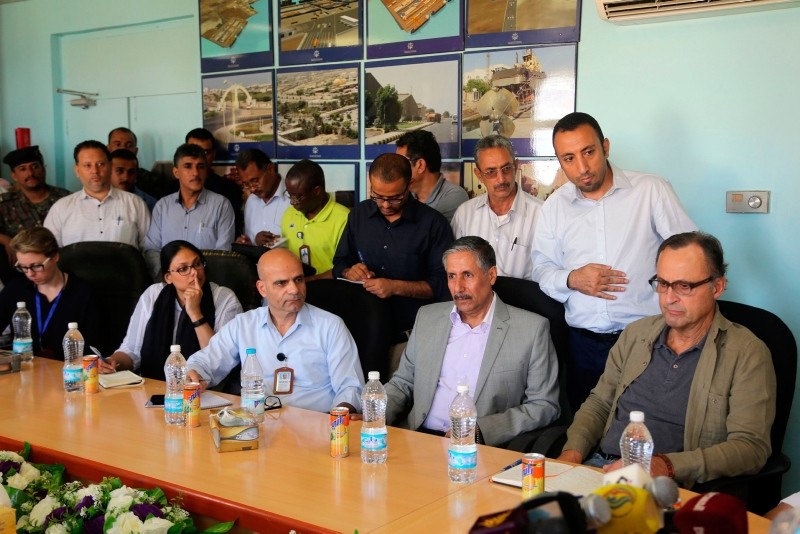 A U.N.-led truce monitoring team including members of Yemen's warring sides held its first meeting in the flashpoint city of Hodeida on Wednesday, a pro-government official said.

The official, who requested anonymity, told AFP: "We are expecting a good outcome."

Loyalist members of the committee were transported to the meeting from east of the city in U.N. vehicles, a Yemeni government official told AFP on condition anonymity.

The ceasefire in the rebel-held city, whose Red Sea port is vital for millions at risk of starvation, is part of a peace push seen as the best chance yet of ending four years of devastating conflict.

Sporadic clashes on Wednesday morning underscored the fragility of the truce that began last week, as both sides accused each other of violating the ceasefire.

Retired Dutch general Patrick Cammaert is heading a joint committee including government officials and Houthi rebels to oversee the truce, and will chair its first face-to-face meeting on Wednesday, according to the UN.

The meeting "is taking place as planned with all members attending", a U.N. official who did not want to be named told AFP, without disclosing the exact location.

U.N. spokesman Stephane Dujarric has described the meeting as "one of the priorities" of Cammaert's mission.

A truce in Hodeida and its surroundings went into effect on December 18 but has remained shaky, with the two sides accusing each other of violations.

Government forces -- backed by a Saudi-led coalition -- and the Iran-aligned Shiite Houthis exchanged gunfire for a few hours on Wednesday morning, an AFP correspondent reported.

The sound of heavy artillery could be heard to the east of the city.

An official for the Saudi-led coalition said Tuesday that 10 pro-government troops had been killed since the ceasefire went into force, accusing the Houthis of 183 violations.

"The fact of the matter is, unfortunately, that the Houthis are clearly looking to provoke a response from the coalition and no one is holding them accountable," he told AFP.

The rebels, in turn, said on the same day that they had recorded at least 31 violations in the past 24 hours by pro-government troops, according to the Houthi-run Al-Masirah TV.

The war between the Shiite Houthi rebels and troops loyal to President Abed Rabbo Mansour Hadi escalated in 2015, when he fled into Saudi exile and the Saudi-led military coalition intervened.

Since then, the war has killed some 10,000 people, according to the World Health Organization (WHO), although human rights groups say the real death toll could be five times as high.

The coalition official warned Tuesday of a renewed offensive on Hodeida if violations of the ceasefire persist.

"We look forward to supporting Cammaert in his efforts... we genuinely hope he succeeds, but if not, we reserve the right to recommence an offensive to liberate the city," said the official who spoke on condition anonymity.

Cammaert arrived in Hodeida on Sunday from the rebel-held capital Sanaa, after meeting with government officials in their de-facto capital Aden.

Yemen's warring sides agreed at peace talks in Sweden this month on the ceasefire to halt a devastating offensive by government forces and the coalition against Hodeida.

The U.N. Security Council unanimously approved a resolution authorizing the deployment of observers to oversee the truce.

The U.N. monitoring team aims to secure the functioning of Hodeida's port and supervise the withdrawal of fighters from the city.

It authorizes the United Nations to "establish and deploy, for an initial period of 30 days from the adoption of this resolution, an advance team to begin monitoring" the ceasefire, under Cammaert's leadership.