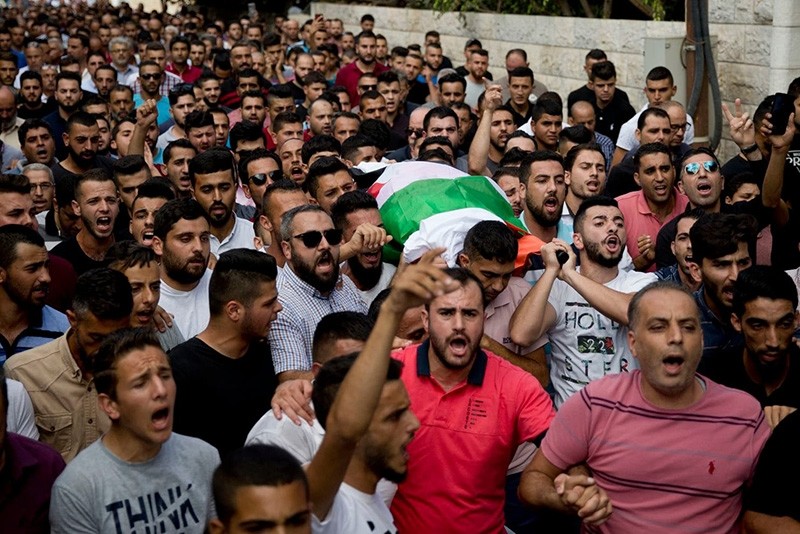 Palestinians carry the body of Aisha Mohammed Rabi during her funeral in the West Bank village of Biddya on Oct. 13. (Majdi Mohammed/AP)
by Daily Sabah with AFP Jan 06, 2019 12:00 am

Israeli authorities confirmed Sunday that they have been holding Jewish minors suspected of murdering a Palestinian woman in a stone-throwing attack.

The arrests had led to mounting speculation in the Israeli media, but authorities had refused to comment, citing a gag order on details of the case while the investigation continued.

Israel's Shin Bet domestic security agency said in a statement that a number of suspects had been arrested on Dec. 30, more than two months after Aisha Mohammed Rabi was killed on Oct. 12.

"The suspects were arrested for serious terrorist offenses, including murder," the Shin Bet statement said.

It added that the stoning took place near the Jewish settlement of Rechalim, close to Rabi's village of Biddya in the Israeli-occupied northern West Bank.

Rabi, a mother of nine, was struck on the head in the attack and died later at a hospital in the city of Nablus, Palestinian official news agency WAFA reported at the time.

Her husband, who was driving the car at the time, escaped with minor injuries, WAFA said.

Palestinian witnesses and security sources cited by the news agency said the stones were thrown by Israeli settlers.

The Shin Bet did not give the number or ages of suspects held, but said they were members of a Jewish seminary in Rechalim.

Israeli investigations into Jewish terrorism – as such cases are often referred to by Israeli media – are highly sensitive.