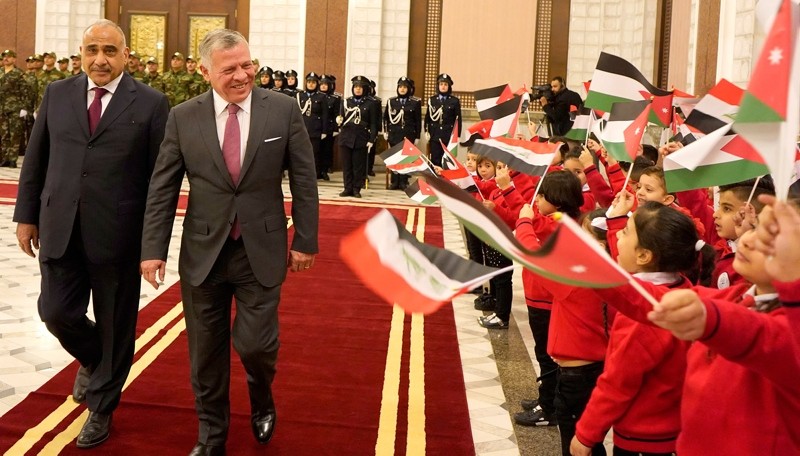 Jordanian King Abdullah II met Iraqi President Barham Saleh in Baghdad on Monday, according to state television, in the monarch's first trip to Iraq in more than a decade.

The visit is the latest in a string of top-level diplomatic encounters in Iraq in recent weeks, which kicked off with a surprise Christmas trip to U.S. troops by President Donald Trump.

King Abdullah's last trip to Iraq was in 2008, when he became the first Arab leader to visit Baghdad after strongman Saddam Hussein was toppled by the U.S.-led invasion in 2003.

Saleh traveled to Jordan in November.

The two countries share a 179-kilometer (111-mile) border, and Jordan is a major importer of Iraqi crude oil.

In 2013, they agreed on a 1,700-kilometer pipeline linking Iraq's oil-rich Basra province to Jordan's Aqaba port, but Daesh terror group's sweep across nearly a third of Iraq put a screeching halt to the plan.

Last year, Jordan approved a framework to revive it, but did not give a timeframe for the line's construction.

The two states have also discussed plans for Iraq to import around 300 megawatts of electricity from Jordan to cope with widespread power shortages.

Washington, which sees Tehran as its top foe in the region, is keen to break those ties.

It reimposed tough sanctions on Iran in November but has granted Iraq a temporary waiver on energy imports, while urging it to partner with U.S. firms instead.

"Everyone is looking to Iraq as a virgin land requiring more investment by regional and international powers," said Iraqi political analyst Issam al-Faily.

"Jordan has a real desire to stretch an oil pipeline from Basra to the Aqaba port because it would fulfill its fuel needs," he told AFP.

Iraq has witnessed a revolving door of diplomatic visits since Trump went in late December.

"From Iran to the United States, Saudi Arabia to Turkey, Syria to Qatar, Iraq can speak to everyone in a region that is otherwise deeply fractured by several strategic fissures," Haddad told AFP.

But it also leaves Baghdad vulnerable to regional power struggles.

"One of the most potent threats to Iraqi stability today is the danger of U.S.-Iranian tensions escalating and playing out in, and at the expense of, Iraq," said Haddad.

That could thwart Iraq's plans to rebuild after three grueling years recapturing urban strongholds from Daesh.

On Monday, two shepherds were found dead after being kidnapped by Daesh near Tikrit, about 175 kilometers north of Baghdad, according to police sources.

It came a day after seven Iraqis were sentenced to death for "terrorism"-related charges.