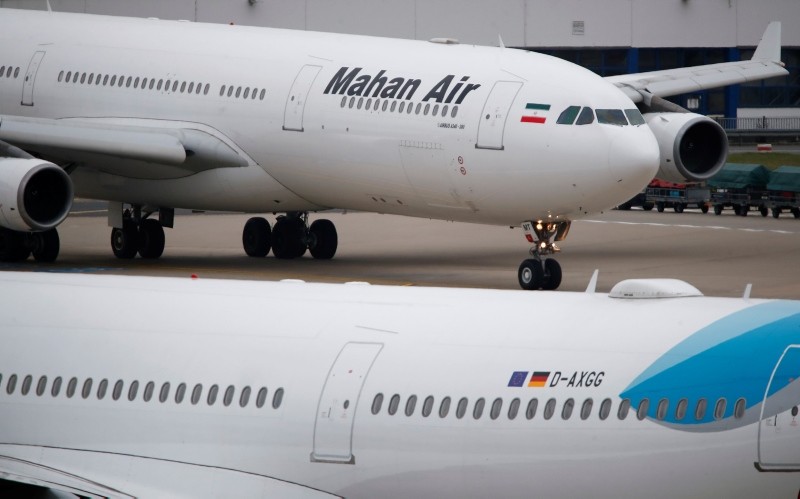 Germany decided to sanction an Iranian airline on suspicion of spying and terror, in an escalation of sanctions adopted by the European Union against Iran over attacks on opponents in the bloc

Berlin has revoked Iranian airline Mahan's right to operate in Germany, a senior government source told Reuters Monday, giving both safety concerns and the suspicion that the airline was being used for military purposes as reasons. The government suspects the airline, which has been on a United States sanctions list since 2011, is used for military purposes by Iran's Revolutionary Guards as well as for terrorist activities.

Iran has dismissed allegations by German prosecutors that an army employee was spying for Tehran. The semi-official ISNA news agency quoted Foreign Ministry spokesman Bahram Ghasemi as saying that "enemies" were aiming to "sour relations" between Iran and Europe. He appeared to be referring to the United States and Israel, which have pressed European nations to withdraw from Iran's 2015 nuclear deal with world powers.

Several European Union countries accuse Iran of carrying out spying operations or planning attacks against mostly the opposition People's Mujahedin of Iran (MEK) members, on the continent. Earlier this month, the Netherlands publicly blamed Iran for killings on its soil in 2015 and 2017. Tehran denied any involvement. It was followed by the EU's decision to designate a unit of Iran's intelligence ministry a terrorist organization, froze its assets and those of two men. In addition, Iranian agents were accused of attempting to bomb a rally in Paris and assassinate dissidents in Denmark and the Netherlands.

Germany's latest move is considered as Europe moving closer to U.S. President Donald Trump's policy of isolating Iran with tough sanctions even though European governments still support the 2015 Vienna deal from which he withdrew in last May.

In Tehran on Jan. 8 during a meeting with European envoys, Iranian officials abruptly stood up, walked out and slammed the door in an extraordinary break with protocol. The French, British, German, Danish, Dutch, and Belgian diplomats in the Iranian foreign ministry room had incensed the officials with a message that Europe could no longer tolerate ballistic missile tests in Iran and assassination plots on European soil, according to four EU diplomats.

"There was a lot of drama, they didn't like it, but we felt we had to convey our serious concerns," one of the diplomats said, as reported by Reuters. "It shows the relationship is becoming tenser," a second said. An Iranian official declined to comment on the meeting.

The next day, the European Union imposed its first sanctions on Iran since world powers agreed the 2015 Vienna nuclear arms control deal with Tehran. The sanctions were largely symbolic but the stormy meeting encapsulated the unexpected shift in European diplomacy since the end of last year.

Mahan Air was blacklisted by the U.S. in 2011, as Washington said the carrier was providing technical and material support to an elite unit of Iran's Revolutionary Guards known as the Quds Force. The U.S. Treasury has threatened sanctions against countries and companies offering the airline's 31 aircraft landing rights or services such as onboard dining.

Rail operator Deutsche Bahn, Deutsche Telekom, Mercedes-Benz parent Daimler and industrial group Siemens have all said they will stop their operations in the country.

Last week German authorities said they had arrested a German-Afghan military advisor on suspicion of spying for Iran.