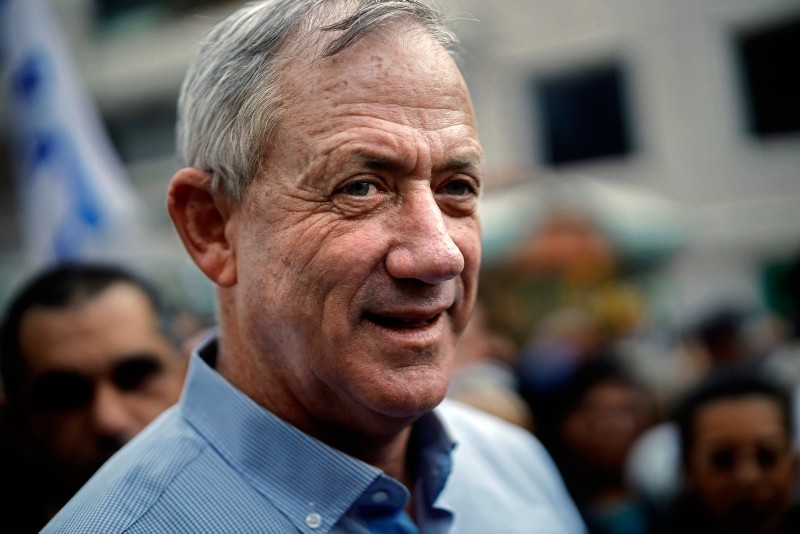 Israeli Prime Minister Benjamin Netanyahu's main rival in an April election has raised the possibility of pulling back from the occupied West Bank, in remarks published Wednesday that drew right-wing criticism but were welcomed by the Palestinians.

Benny Gantz, the former armed forces chief of staff, spoke positively of Israel's pullout from the Gaza Strip in 2005, in his first interview since launching his election campaign last week.

The Gaza withdrawal had been "approved by the Israeli government and implemented by the army and settlers in a painful but good way," he told the Yediot Aharonot newspaper.

"(One should) learn from it and apply it to other places," he said.

Gantz did not explicitly mention the West Bank in his remarks and refrained from outlining conditions for any pullback from the Palestinian territory.

"We must find a way that does not require us to exercise control over other people," he said.

The 59-year-old launched his campaign on Jan. 29 in a speech promising a conservative diplomatic and security policy.

He pledged to keep the strategic Jordan Valley area of the occupied West Bank under Israeli rule, along with the Israeli-occupied Golan Heights and east Jerusalem.

Although he did not say so in the interview, Gantz could support a withdrawal from wildcat outposts that are not approved by the Israeli authorities.

All Israeli settlements are considered illegal under international law but Israel draws a distinction between those it sanctions and those it does not. The international community constantly criticizes Israel for its continous settlement activity in the West Bank.

Successive peace plans proposed by Israel in the past provided for a partial withdrawal from the West Bank and the maintenance of major settlement blocs in return for offering the Palestinians territory in the Negev desert between Gaza and the southern West Bank.

Gantz's Israel Resilience party, which was formed in December, is expected to win between 21 and 24 seats in the 120-member parliament in the April 9 election, according to the latest opinion polls.

That would put it second only to Netanyahu's right-wing Likud party.

In a statement, Gantz's party said that, unlike the 2005 Gaza withdrawal, the former armed forces chief did not foresee any unilateral pullout from West Bank settlements.

"It is encouraging if he succeeds and he sticks to this opinion," Nabil Abu Rudeinah told journalists in Ramallah.

But he said they needed more details about Gantz's policies.

"We don't know him yet, we heard about him. As President Abbas keeps saying all that we need is an Israeli government who believes in peace."

"We told you Benny Gantz would form a leftist government with the help of" MPs of the Arab-led Joint List who hold 13 seats in parliament, a Likud spokesman said.

His remarks were also attacked by Education Minister Naftali Bennett, who heads a newly founded ultra-nationalist formation that favours the partial annexation of the West Bank.

"Gantz has thrown off the mask and overtaken Avi Gabbay (of the centre-left Labour party)... and wants to expel Jews from their homes through a unilateral withdrawal from Judea and Samaria (the West Bank)," Bennett said.

Since founding his party, Gantz has emerged as the most serious challenger to Netanyahu, who has been prime minister since 2009 as well as between 1996-1999.