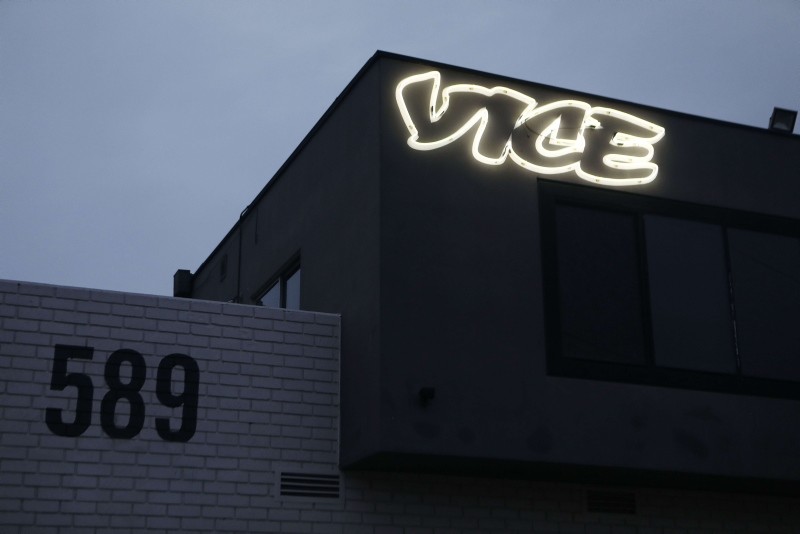 Vice Media offices display the Vice logo at dusk on February 1, 2019 in Venice, California. Vice Media announced it is cutting 250 jobs globally, about ten percent of its workforce. (AFP Photo)
by Anadolu Agency Feb 09, 2019 12:00 am

The Kingdom of Saudi Arabia sought Vice Media's assistance to build a sympathetic media empire, according to a report published Friday.

Riyadh had already taken on a smaller enterprise through a state-owned company to contract Vice to produce documentaries on hitherto reforms in the puritanical Wahabi kingdom, the Wall Street Journal reported.

The country, which won accolades for allowing women to drive in 2018 but which still requires them to receive approval from a male relative to carry out many of life's most basic tasks, sought out a more encompassing joint venture with Vice after contracting it for the documentary series.

The meeting was part of a push by bin Salman to develop media companies that can compete with Saudi Arabia's regional competitors, including Qatar's Al-Jazeera media company.

But the effort has been mired in the fallout of the Kingdom's Oct. 2 killing of Washington Post columnist Jamal Khashoggi, who was brutally murdered shortly after he entered the Saudi Consulate in Istanbul.

The talks about a possible joint venture with Vice have since stalled, and are unlikely to go forward, the Journal reported citing people familiar with the negotiations.

And Vice told the Journal it is reviewing its agreement with Saudi Research and Marketing Group, or SRMG, to produce documentaries on reform in the kingdom.

The relationship between the Kingdom and Vice was initiated by Prince Khalid bin Salman, the Saudi ambassador to the U.S. and younger brother of the crown prince, who expressed interest in the media company which brands itself to younger audiences as an edgier organization.

It was that image that attracted Khalid to the company in the hopes it could help SRMG connect with younger Saudis.