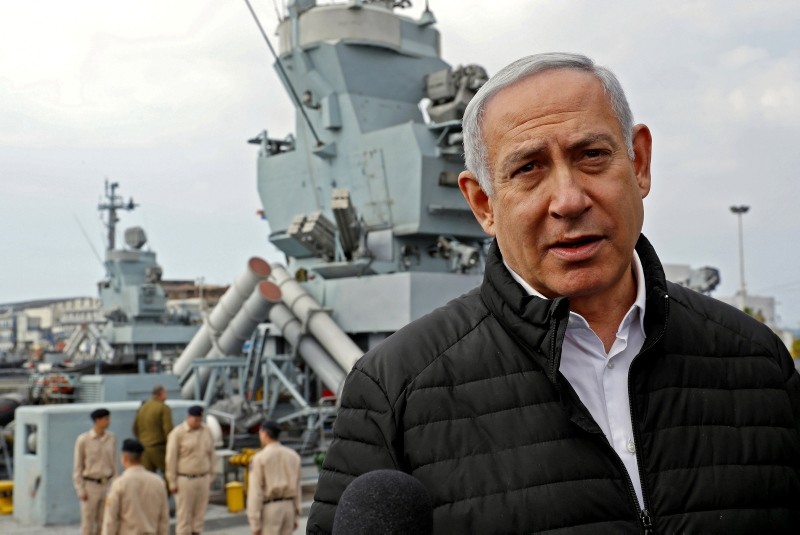 Israeli Prime Minister Benjamin Netanyahu gives a statement during his visit to a navy base in Haifa, Israel, February 12, 2019. (Reuters Photo)
by Daily Sabah with Wires Feb 13, 2019 2:54 pm

On the final day of Israel's destructive Operation Protective Edge, which killed more than 2,200 Palestinians in 2014, Saudi Arabia offered the apartheid state a plan including a joint front against Iran, but Israeli Prime Minister Benjamin Netanyahu refused it, Channel 13 reported on Wednesday.

The channel also added that Tamir Pardo, Israeli spy agency Mossad's then-chief who worked between 2011 and 2016, also paid a highly confidential visit to Saudi Arabia at the time.

The Saudi plan included assistance to the illegally blockaded Gaza Strip and restarting Israeli - Palestinian peace negotiations, while being described as an "upgraded version of the Arab Peace Initiative," according to the channel.

The report said Saudi officials "went further than they have ever gone" and agreed in large part to Israel's demands, but wanted more flexibility from their counterparts, resulting in the collapse of the talks until King Salman took the throne and controversial Crown Prince Mohammad Bin Salman took the helm.

Increased tensions between Tehran and Riyadh have fueled speculation that shared interests may push Saudi Arabia and Israel to work together against what they see as a common Iranian threat.

Saudi Arabia opened its airspace for the first time to a commercial flight to Israel last year, which an Israeli official hailed as historic following two years of efforts.

Conducted between July and August in 2014, Operation Protective Edge killed over 2,200 Palestinians, according to Gaza officials, Israel and foreign observers. The Palestinians say most of the dead were civilians. Israel says more than half were Hamas fighters. Israel lost 67 soldiers and six civilians in the war.