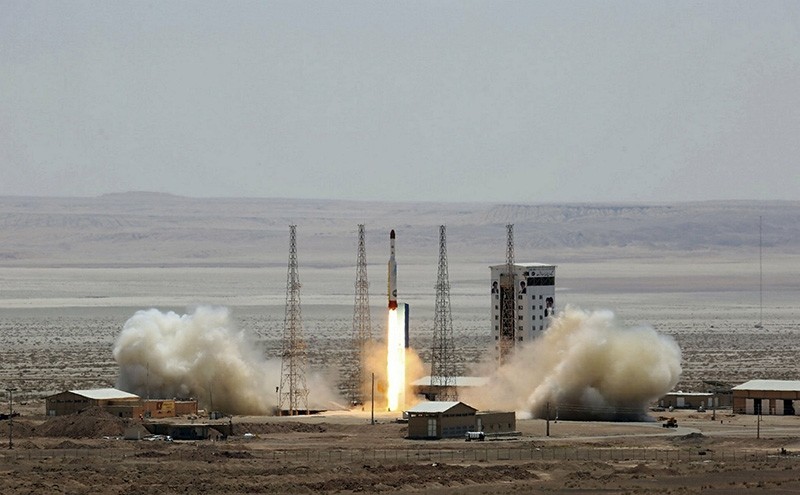 This July 26, 2017, file photo shows a handout photo released by Iranu2019s Defense Ministry showing a simorgh (phoenix) satellite rocket at its launch stie at an undisclosed location in Iran. (AFP Photo)
by Compiled from Wire Services Feb 16, 2019 11:56 am

Iran's bid to launch a second satellite in the past two months has failed, Iranian Foreign Minister Mohammad Javad Zarif said in an interview with NBC News published Friday.

Its effort to launch a satellite last month also failed. Despite both failures, Zarif's confirmation is likely to raise tensions with the United States, which is concerned the long-range ballistic technology used to send satellites into space could also be used to launch warheads.

A representative for the U.S. National Security Council did not immediately respond to a request for comment.

Iran views its space program as a matter of national pride. Tehran has denied that the space vehicle launches and missile tests violated a U.N. Security Council resolution.

Last month, Iran said a satellite it tried to launch did not reach adequate speed and failed. Iran's telecommunications ministry said at the time that the satellite, named Payam, was intended to be used for imaging and communications purposes for about three years.

Iran launched its first domestically-built satellite in 2009, on the country's 30th anniversary of its 1979 Islamic Revolution. This month, Iran marked the 40th anniversary of the revolution. Over the past decade, Iran has sent several short-lived satellites into orbit and in 2013 launched a monkey into space.

Iran's Foreign Ministry could not be reached for comment on the NBC News report which was widely quoted by Iranian news outlets, including the state news agency IRNA.

Iran denies wanting nuclear weapons. A 2015 nuclear deal it struck with world powers limited its enrichment of uranium in exchange for the lifting of economic sanctions.

However, Trump pulled the U.S. out of the deal in May. While United Nations inspectors say Iran has honored the deal up to this point, it has threatened to resume higher enrichment.