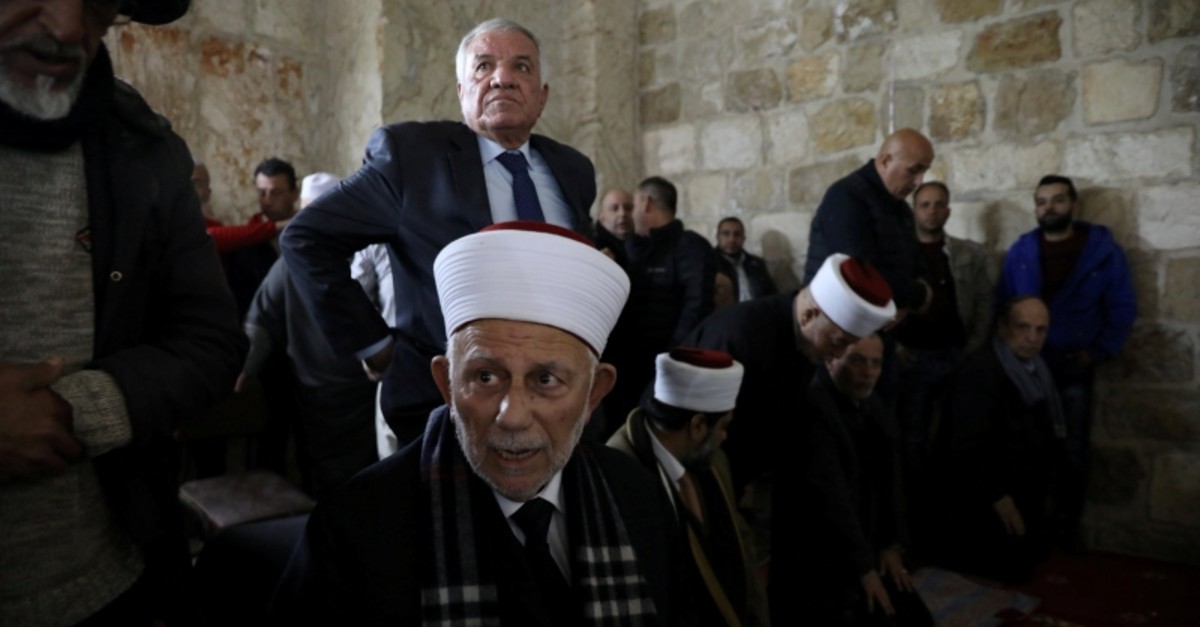 Chairman of the Waqf Council, Abdel-Azeem Salhab, attends Friday prayers together with other Palestinian Muslims inside the Golden Gate near Al-Aqsa Mosque in Jerusalem's Old City Feb. 22 (Reuters Photo)
by Compiled from Wire Services Feb 24, 2019 6:40 pm

Sheikh Abdul Azim Salhab, the head of the Muslim Waqf (Endowment) Council in Jerusalem, and Sheikh Najeh Bkerat, the deputy director of Muslim Endowments and Al-Aqsa Affairs, were arrested in raids on their homes, the Palestinian Prisoners Society said in a statement.

Saeb Erekat, a senior aide to President Mahmoud Abbas, denounced the arrests "in the strongest terms" and demanded their immediate release.

Jordan's minister in charge of the Waqf and Islamic affairs, Abdul Nasser Moussa Abu al-Basal, called it "an unacceptable and dangerous escalation that impacts Jordan's role as a caretaker of Jerusalem's holy sites."

Because of the religious sensitivities over the site the king of Jordan retains a role in ensuring the upkeep of the Muslim holy places in the city and Jordan appoints the Waqf Council which oversees compound.

Israeli police spokesman Micky Rosenfeld said Abdel Azeem Salhab had been arrested for violating an order preventing entry into a prohibited area of the holy site.

Later in Sunday, Salhab, who is the head of the council of the Waqf in Jerusalem, the religious authority that governs the site, was freed.

Official Palestinian news agency WAFA reported that his deputy Najih Bakira was also arrested, but police had not confirmed it.

The arrests follow the detention of 60 others overnight Thursday to Friday as police said they were responding to calls for unrest at the holy site surrounding Friday prayers there.

Some have since been released with an order not to visit the holy site.

The Islamic Endowments Authority, a Jordan-run entity mandated with overseeing east Jerusalem's Muslim and Christian holy sites, has lodged repeated requests with the Israeli authorities for the gate to be permanently reopened.

On Friday, Israeli police arrested dozens of Palestinians in east Jerusalem in hope of preempting protests against the Israeli closure of the gate.

The Al-Rahma Gate was first closed by the Israeli authorities in 2003. An Israeli court renewed the closure order in 2017.

For Muslims, the Al-Aqsa represents the world's third holiest site. Jews, for their part, refer to the area as the "Temple Mount," claiming it was the site of two Jewish temples in ancient times.

Israel occupied east Jerusalem, in which the Al-Aqsa is located, during the 1967 Arab-Israeli War. It annexed the entire city in 1980 in a move never recognized by the international community.

There have been scuffles there in recent days after Israeli authorities padlocked a door, known as the Golden Gate or Gate of Mercy in Arabic, to disused offices.

The offices were closed by an Israeli court order in 2003, police say, but video posted on social media showed Muslim officials praying there recently in defiance of the court ban.

The religious site is located in east Jerusalem, occupied by Israel in the 1967 Six-Day War and later annexed in a move never recognised by the international community.