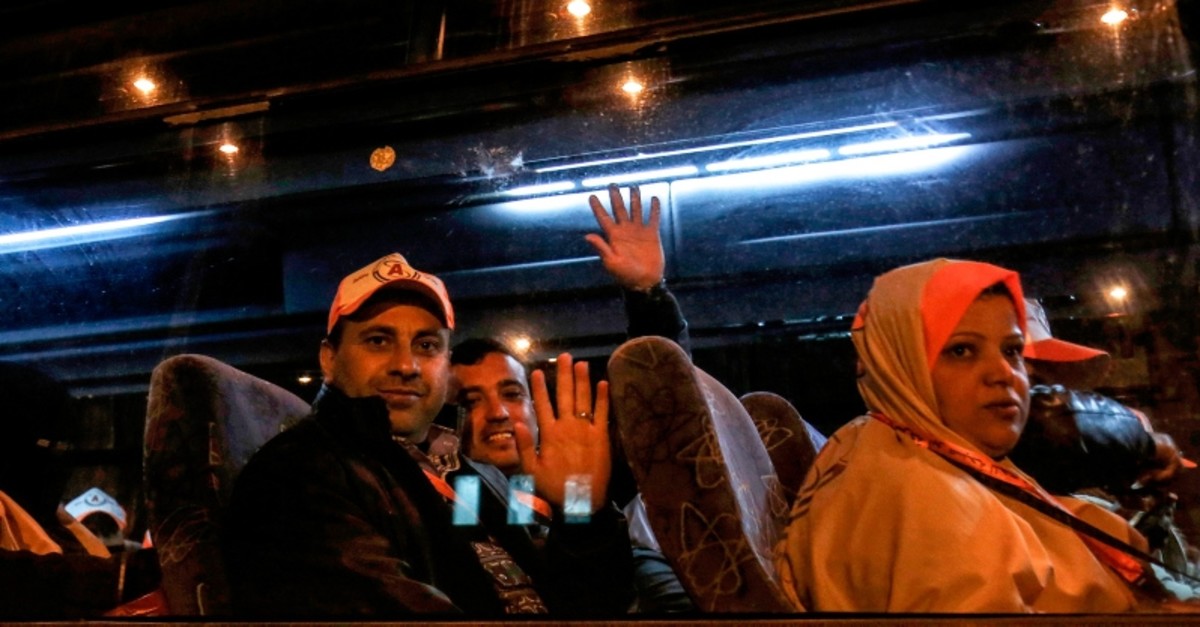 Palestinians Muslim pilgrims wave to their relatives as they sit in a bus at the Rafah border crossing between the Gaza Strip and Egypt before crossing to depart for umrah pilgrimage for the first time since 2014, Sunday, March 3, 2019. (AFP Photo)
by Compiled from Wire Services Mar 03, 2019 4:09 pm

Palestinians in the Gaza Strip are resuming a minor pilgrimage to Saudi Arabia, known as the "umrah," after nearly five years of an Egyptian ban.

The first group of 800 Palestinians from Gaza left through the Rafah crossing point with Egypt on Sunday. Airplanes will fly them to Mecca from the Egyptian capital of Cairo.

Palestinian officials say an agreement was reached between Egypt and the West Bank-based Palestinian Authority to allow the pilgrimage.

Egypt halted the Gazans' umrah in 2015 over instability in northern Sinai, which borders Gaza, but allowed transit for the hajj.

Around 2,500 pilgrims are authorised annually to leave Gaza via Egypt for the hajj, one of the five pillars of Islam that Muslims must undertake at least once in their lifetime.

As Cairo's relations improved with the Palestinian resistance movement Hamas, which has governed Gaza since 2007, Egypt started reopening the border more regularly last summer, paving the way for resuming of the umrah.

The Rafah crossing with Egypt is the only one out of Gaza not controlled by Israel. It had been largely closed in recent years, but was reopened some 10 months ago.

Around 300 travellers use it daily in either direction, according to figures dating to December provided by the Gisha NGO, which monitors the blockade of Gaza.