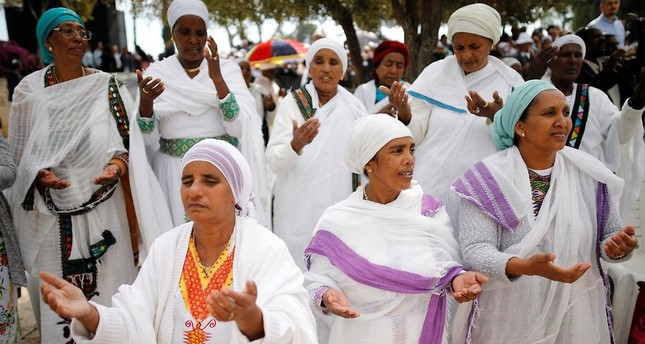 On a bright Sunday morning a solemn collective prayer for help from God reverberated through the small synagogue in Lamberet, a neighborhood adjacent the Israeli embassy in the Ethiopian capital of Addis Ababa.

"God, be with us, lead us to the Promised Land," the rabbi said, arms stretched out to the sky at the end of the congregation.

Young and old women who were dressed in traditional white Ethiopian garb and men who wore the Jewish prayer shawl and hat loudly chanted: "Amen!"

Andualem Wugu, manager of the Ethiopian Jewish community in Addis Ababa told Anadolu Agency that members of the community had been regularly praying for God's help to immigrate to Israel for over 2 decades.

"In our beliefs, the more we beg God for help the more he listens and responds" he noted, adding: "We are sure, God will not sit idly by while the racist Israeli Prime Minister Benjamin Netanyahu keeps us languishing here.''

By all appearances, the men and women attending the service were ordinary Ethiopians. Their physical appearance, attire, greeting modes, etiquette and the language they speak, Amharic, do nothing to reveal their faith. They do not even speak Hebrew.

Wugu said this was a natural outcome of the history of Ethiopian Jews stretching back two millennia who have lived in the Gander, Wollo and Tigray regions in the north of the country.

Wugu stressed that despite these similarities, the Jewish community had its own culture, religion and country.

"Our religion is Judaism, and our country is Zion, Israel," he said.

Recounting various theories on the origins of the group, Wugu said it was widely believed it had descended from Jews who lived in the ancient Levantine Kingdom of Judah and were forced to retreat into Egypt following the Babylonian conquest of Jerusalem which resulted in the destruction of the First Temple in 586 BC.

Over the course of history, Wugu claimed that Ethiopian Jews experienced forced assimilation, persecution and marginalization under successive Ethiopian states.

"For instance, followers of the Ethiopian Orthodox Church had labeled us as immoral Christ killers, witch doctors and aliens,'' he added.

Members of the community were only granted equal rights to practice their religion in 1991, Wugu noted.

Over the past three decades, successive Israeli governments allowed Ethiopian Jews to settle in Israel with the consent of their Ethiopian counterparts and through covert operations by Israeli security services which airlifted thousands of Ethiopian Jews from northern Ethiopia and refugee camps in Sudan.

Some 135,000 Ethiopian Jews currently live in Israel, while roughly 8,000 in Addis Ababa and Gander await permission from Tel Aviv to make the journey.

Over the past 20 years or so, some had been taken to Israel after prolonged screening procedures, often plagued by long indefinite freezes of the entire process, said Melese Sidisto, who heads the Ethiopian Jewish community.

"We remain separated from our families, and deliberately made to live in desperation, hopelessness and poverty," he said, asserting that Israeli authorities were not willing to "absorb and embrace black Jews."

The Israeli government in 2015 had decided to allow all remaining 8,000 Ethiopian Jews which it classified as Falash Mura to immigrate to Israel. However, according to Israel's religious legal codes, Falash Mura are dependents Ethiopian Jews who were converted to Christianity. Thus, Israel does not recognize them as Jewish.

Soon after the 2015 decision, Wugu had said the entire process had been put on hold due to lack of budget.

He said Netanyahu had been making Ethiopian Jews excuses and false promises for years, all the while looking to attract Jewish people from Europe to immigrate to Israel.

"We have brothers, sisters, relatives who were proven to be Jewish and live in Israel. How come we are not Jewish?" Wugu exclaimed, arguing that this represented a deliberate policy of exclusion of Ethiopian Jews.

"It is racism and Netanyahu is a racist," he added

The 3,500-strong community is determined to "fight for justice" with a planned mass hunger strike, according to Sidisto. "God willing, Netanyahu will go, in the upcoming elections," he said.

Share on Facebook Share on Twitter
Previous in MidEast Ahead of the first anniversary of the ‘Great March of Return' protests... Next in MidEast Iran on Wednesday denied an Israeli media report that its intelligence...
DAILY SABAH RECOMMENDS