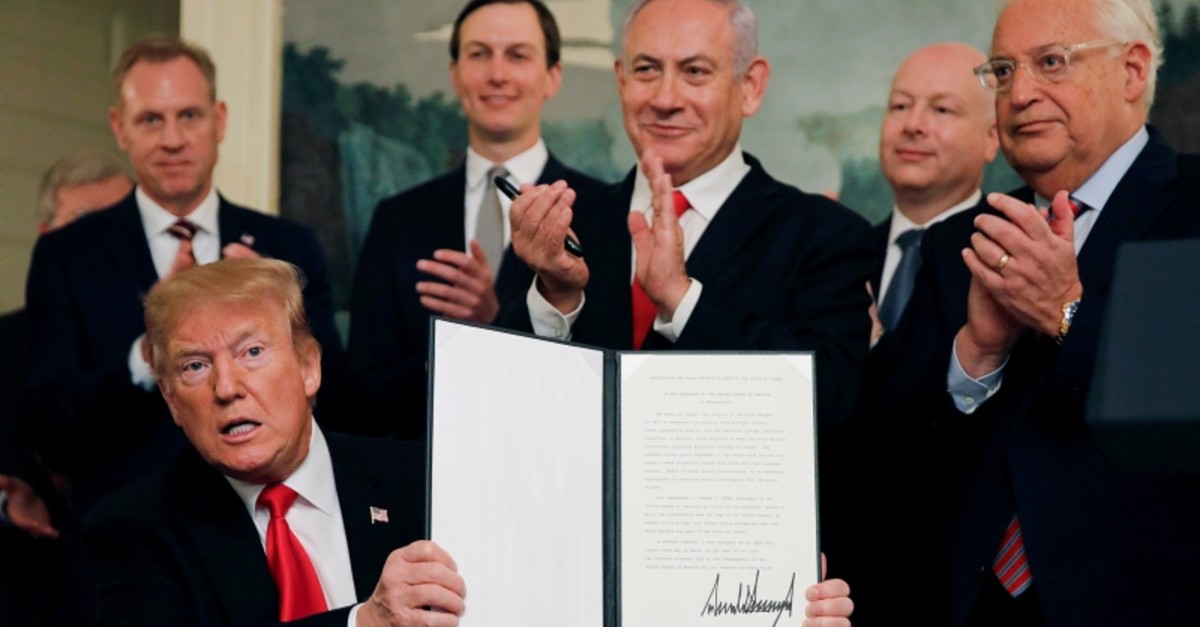 President Trump holds a proclamation recognizing Israel's sovereignty over the Golan Heights as he is applauded by Israel's Netanyahu and others during a ceremony in the Diplomatic Reception Room at the White House, March 25, 2019. (REUTERS Photo)
by Compiled from Wire Services Mar 25, 2019 7:21 pm

President Donald Trump signed a decree on Monday at the start of a meeting with Israeli Prime Minister Benjamin Netanyahu saying the United States recognizes Israeli sovereignty over the Golan Heights, territory that Israel seized from Syria in the 1967 Middle East war.

The decree formalized Trump's statement on March 21 saying it was time for the United States "to fully recognize" Israeli sovereignty over the Golan. The move appeared to give Netanyahu a boost ahead of the closely contested April 9 Israeli elections.

"This was a long time in the making," Trump said alongside Netanyahu in the White House. U.S. recognition for Israeli control over the territory breaks with decades of international consensus.

Trump said his decision would cement the Jewish state's ability to defend itself from regional threats should a broad Arab-Israeli peace deal ever be reached.

The U.S. is the first country to recognize Israel's sovereignty over the Golan, which the rest of the international community regards as Israeli-occupied.

Netanyahu called the recognition "historic" and said the Golan Heights, which are still claimed by Syria, would remain permanently under Israeli control. "We shall never give it up," he said.

"Your proclamation comes at a time when Golan is more important than ever for our security," he said.

Netanyahu noted a series of steps Trump has taken since assuming office, including his withdrawal from the 2015 Iran nuclear deal, recognition of Jerusalem as Israel's capital and moving the U.S. Embassy there from Tel Aviv.

In addition to signaling U.S. support for Israel's security, the decision appeared to show Trump's support for Netanyahu, the political candidate in April 9 elections. Netanyahu is facing a tough challenge from a popular former military chief and reeling from a series of corruption allegations. He has repeatedly sought to focus attention on his foreign policy record and strong ties with Trump.

Israel seized roughly two-thirds of the wider Golan Heights area from Syria after defeating an Arab coalition in the 1967 Six-Day War, occupying the territory as a de facto result since then. It formally annexed the Golan Heights in 1981; however, the action was unanimously rejected by the U.N. Security Council and international community. Security Council resolution 497, issued after the annexation, refers to Israel as "the occupying power" and says Israel's attempt to "impose its laws, jurisdiction and administration in the occupied Syrian Golan Heights is null and void and without international legal effect." Syria and Israel had talks several times for a peace deal that included return of the territory to Damascus but negotiations eventually collapsed.