World adamant on not changing position over Israeli-occupied Golan Heights 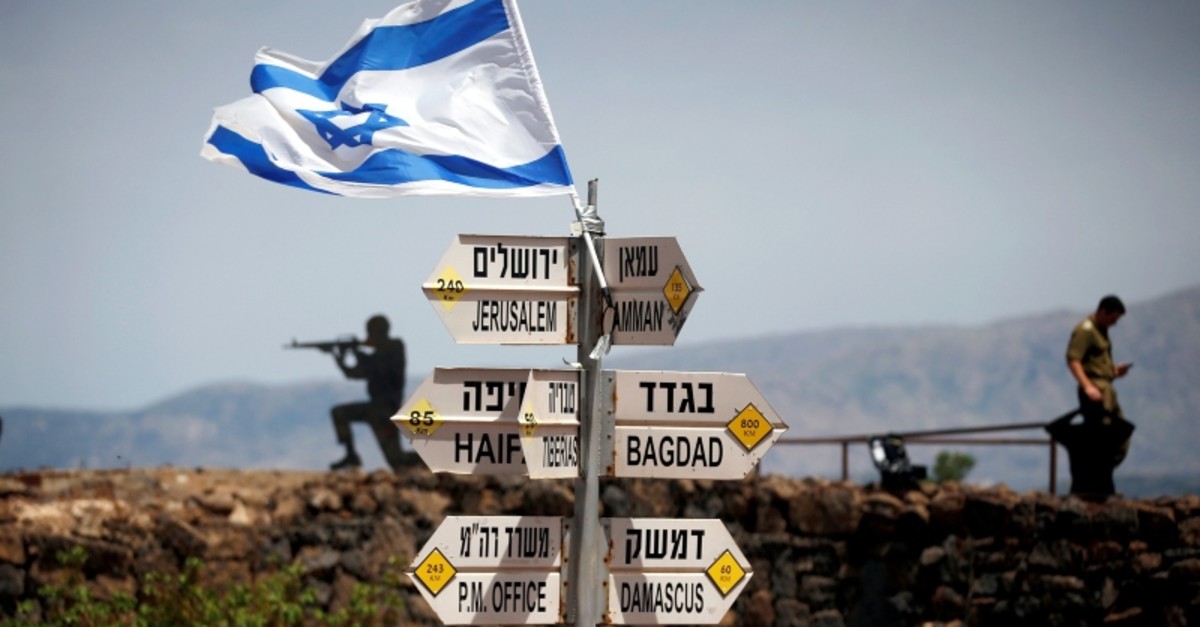 An Israeli soldier stands next to signs pointing out distances to different cities, on Mount Bental, an observation post in the Israeli-occupied Golan Heights that overlooks the Syrian side of the Quneitra crossing. (REUTERS Photo)
by Compiled from Wire Services Mar 25, 2019 9:55 pm

Many international bodies and governments have warned of a 'new wave' of escalations in the Middle East after U.S. President Donald Trump signed on Monday a proclamation recognizing Israeli sovereignty over the disputed Golan Heights, with condemnations and criticisms pouring from across the globe.

United Nations Secretary-General Antonio Guterres was one of the first to respond to the controversial move, saying it was "clear that the status of Golan has not changed."

Trump — who in 2017 took the even more momentous step of recognizing disputed Jerusalem as Israel's capital — called the Golan declaration "a long time in the making," in a dramatic shift from decades of U.S. policy. Netanyahu had pressed for the recognition of his country's sovereignty over the area for months.

"The U.N.'s policy on Golan is reflected in the relevant resolutions of the Security Council and that policy has not changed," U.N. spokesman Stephane Dujarric said. Israel seized the strategic land from Syria in the 1967 Middle East war.

A U.N. Security Council resolution adopted unanimously by the 15-member body in 1981 declared that Israel's "decision to impose its laws, jurisdiction, and administration in the occupied Syrian Golan Heights is null and void and without international legal effect." It also demanded Israel rescind its decision.

The Syrian regime blasted Trump after he recognized Israel's claim to sovereignty over the Golan Heights, saying it was a flagrant violation of international law and the U.N. Charter. 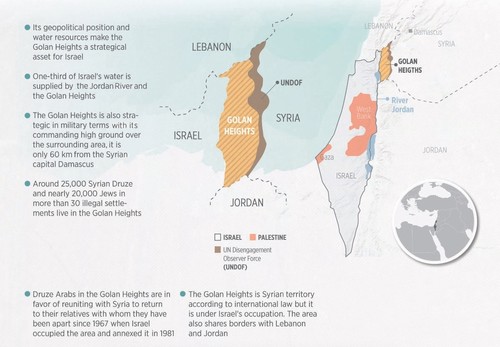 Calling the decision Trump's "election gift" to Netanyahu, Turkish Foreign Minister Mevlüt Çavuşoğlu said the United States' recognition of Israeli sovereignty over the Golan Heights was unacceptable and asserted that Ankara will take action against the decision, including at the United Nations.

Saudi Arabia, Bahrain, Qatar and Kuwait - all regional allies of Washington that host American troops - on Tuesday criticized the move by President Donald Trump to recognize Israel's 1981 annexation, and said the territory was occupied Arab land.

"It will have significant negative effects on the peace process in the Middle East and the security and stability of the region," a statement on Saudi Arabia's state news agency SPA said.

It described Monday's declaration as a clear violation of the United Nations Charter and of international law.

Kuwait and Bahrain said they regretted the decision while Qatar called on Israel to end its occupation of the Golan Heights and comply with international resolutions.

Moscow said it feared "a new wave of tensions" in the Middle East following the controversial decision.

Russia's Foreign Ministry Spokeswoman Maria Zakharova said the move "ignores all international procedures" and would "only aggravate the situation."

"Unfortunately, this could drive a new wave of tensions in the Middle East region," Zakharova said in a radio broadcast, according to Russian news agencies.

The U.K. also joined the condemnations, saying it has "no plans" to change its position on the sovereignty of the occupied territory.

"The U.K. views the Golan Heights as territory occupied by Israel," said a statement, underlining that international law, including the U.N. Charter, prohibited the "annexation of territory by force."

"We did not recognize Israel's annexation in 1981 and have no plans to change our position," the U.K. Foreign Office added.

Arab League Secretary-General Ahmed Aboul Gheit slammed Trump's recognition of the Golan Heights as Israeli territory, saying the decision does not change the area's status, according to a statement published by Egypt's state news agency MENA.

In a statement carried by the NNA state news agency, the Lebanese foreign ministry said the move "violates all the rules of international law" and "undermines any effort to reach a just peace."

"The Golan Heights are Syrian Arab land, no decision can change this, and no country can revisit history by transferring ownership of land from one country to another," it said.

The ministry said attempts by Israel to expand its territory by way of "force and aggression" would only isolate the Jewish state.

Amnesty International, on the other hand, called the decision "irresponsible, reckless and yet another example of the Trump Administration violating international law and consensus by condoning Israel's illegal annexation."

Eric Goldstein, deputy Middle East and North Africa director at Human Rights Watch, said Trump seems to want to "drive a wrecking ball" through international law that protects the people who live in "occupied Golan Heights." He said it could embolden other "occupying states to double down on their own land grabs, settlements and plunder of resources."