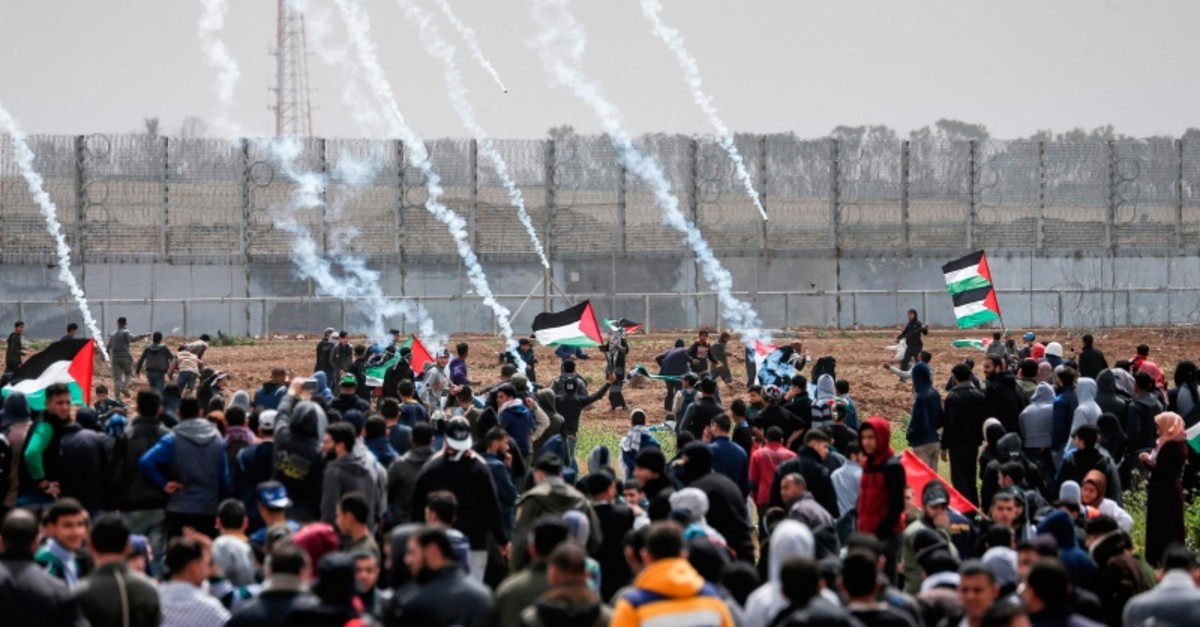 Tear gas canisters fall among Palestinian protesters during a demonstration near the border with Israel in Malaka east of Gaza City on March 30, 2019. (AFP Photo)
by Compiled from Wire Services
Mar 30, 2019 2:16 pm

Thousands of Palestinians gathered on the Gaza Strip-Israel buffer zone on Saturday to take part in mass rallies marking the first anniversary of the Great March of Return anti-occupation protests.

The protests also commemorate the 43rd anniversary of the Land Day when six people were killed in 1976 during demonstrations against seizure of Arab land in Galilee.

Waving Palestinian flags, demonstrators chanted slogans for an end to the 12-year-long Israeli blockade on Gaza, according to an Anadolu Agency reporter in the area. Israeli army said some 30,000 people took part in the protests, but the number could be much higher.

Dozens of volunteers in fluorescent vests prepared to restrain demonstrators from getting too close to the border fence. Ambulances lined up in front of clinics and police supervised encampments erected far from the fence.

The Hamas-run Health Ministry said Saturday that Adham Amara, 17, was wounded in the face and died in one of the protest camps in east Gaza City, while another 33 demonstrators were injured, including ten by live ammunition.

The ministry previously said a 21-year-old, Mohammad Jihad Saad, died on Saturday morning after he was hit in the head by shrapnel from an Israeli tank shell fired at eastern Gaza the night before. Nine other Gazans were injured in clashes with the Israeli army Friday evening, the ministry said.

Later on Saturday a fourth Palestinian died from Israeli fire, the health ministry in the enclave said.

The Israeli army said that explosive devices had been thrown from the Gaza Strip towards the border fence and that in response, a tank struck a Hamas military post.

The delegation is currently in Gaza as part of a shuttle diplomacy to reach a truce deal between Gaza-based resistance factions and Israel.

In the occupied West Bank, clashes erupted between Palestinian protesters and Israeli forces.

Israeli forces used live ammunition, rubber bullets and teargas to disperse Palestinian protesters in the cities of Ramallah, Al-Bireh and Nablus, according to Anadolu Agency reporters in the area.

Several protesters were reportedly injured during the violence.

"Any Israeli assault on the marches will be met with an equal response," the Islamic Jihad said following a meeting between group chief Jihad al-Nakhla and Hamas deputy leader Saleh al-Aarouri in Lebanese capital Beirut.

In the run-up to Saturday's rallies, the Israeli army has deployed numerous tanks and armored vehicles along the buffer zone with the Gaza Strip.

On Thursday, Israeli Prime Minister Benjamin Netanyahu reportedly instructed the army to prepare for the possibility of a "broad" campaign in Gaza.

Netanyahu is seeking his fourth consecutive term in April 9 elections, but is facing a serious challenge from a group of ex-army chiefs who have criticized what they say is his failed Gaza policy.

In the final stretch of the campaign, Netanyahu needs to keep the Israel-Gaza frontier quiet, without seeming to make concessions to Hamas. Netanyahu took heavy criticism this week for what was seen as a soft response to renewed rocket fire out of Gaza.

Nearly 270 Palestinian demonstrators have been killed by Israeli army gunfire since Palestinians began holding regular demonstrations along the Gaza-Israel buffer zone in March of last year.

Figures from UNICEF show some 40 children have been killed and 3,000 others have been hospitalized with injuries, many leading to life-long disabilities.

"All necessary measures need to be taken to ensure children are not targeted," Geert Cappelaere, UNICEF's regional director in the Middle East and North Africa, said on Thursday.

"Furthermore, any attempt to use children in protests and demonstrations that could turn violent is unacceptable," he added.

They are expected to reach their peak on Saturday, with calls for a "million-man march" not only in the Palestinian Territories and Israel but in Arab and European countries too.

A general strike was held in the Gaza Strip and the Health Ministry and Interior Ministry declared a state of emergency.

Fouad Aishan, 40, came with his five children to the frontier. He said he plans to show his children the Israeli soldiers and return to safety before the march started.

"I come here driven by personal national motivation," he said. "It has nothing to do with what the politicians do."

The Israeli army said Friday that Chief of Staff Aviv Kohavi had approved preparation plans for the weekend's expected events in the area of the Gaza Strip.

Three infantry brigades and an artillery unit were dispatched to reinforce the Southern Command.