Sudan's military ties with Saudis, UAE in spotlight amid turmoil 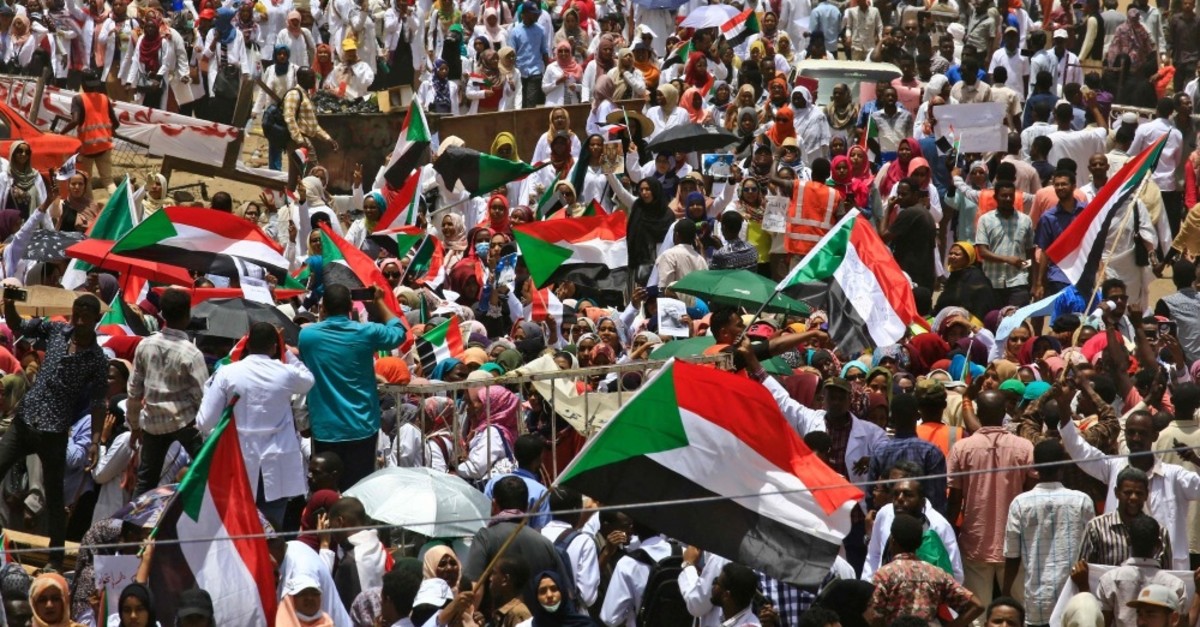 Sudanese protesters wave signs and flags as they continue to protest outside the army complex, Khartoum, April 17, 2019.
by Daily Sabah with Wires Apr 18, 2019 12:13 am

Amid continuing pressure to transfer power to a civilian government, Sudanese protesters are rejecting support from Saudi Arabia and the UAE to the military regime

With Sudan in turmoil following the ouster of longtime President Omar al-Bashir, the continuation of his foreign policy towards Gulf countries by the military has not been well received by the Sudanese people. Despite the declaration of a curfew last week, protesters gathered near the military headquarters in the capital and chanted slogans against Saudi Arabia, the United Arab Emirates (UAE) and Egypt. "We do not want your support," one banner said, in an apparent reference to countries backing the council, while another said, "No to intervention in Sudan by Saudi Arabia, the United Arab Emirates and Egypt."

Sudan is part of Saudi Arabia's disastrous military campaign in Yemen. That marked a dramatic shift by Khartoum, which aligned itself with the Gulf Arab monarchies at the expense of close ties with their archrival Iran. Ousted Sudanese President Omar al-Bashir deployed troops to Yemen in 2015 as part of a major foreign policy shift that saw Khartoum break its decades-old ties with Shiite Iran and join the Saudi-led coalition. Sudan, an Arab League and African Union members situated along the strategically prized Red Sea, play a unique role in the Middle East's geopolitical order.

This was the first major foreign policy announcement made by the new military rulers after ousting al-Bashir last week and essentially a continuation of his policy. Last week, Saudi Arabia and the UAE issued statements in support of Sudan's transitional military council after mass protests forced longtime President al-Bashir from power. Sudanese media reports claim that many of the Sudanese troops fighting in Yemen are from the Rapid Support Force (RSF) paramilitary group. Hundreds of Sudanese soldiers and officers are fighting in Yemen and have suffered casualties, raising calls for a withdrawal.

Sudanese troops participating in a Saudi-led military coalition in Yemen will remain in the war-torn country until the Arab alliance achieves its goals, a senior Sudanese military official said Monday. "We will stick to our commitment with the Arab alliance, and our troops will remain until the alliance achieves its goals," Mohammad Hamdan Daglo, the second-in-charge in Sudan's new ruling military council, told the Sudan News Agency.

For nearly four months, thousands of people protested across Sudan, calling for ousted President al-Bashir to step down. Their wish came true on April 11, when the military ended his 30-year rule and placed him under house arrest. But it wasn't enough for the demonstrators, who fear an army dominated by al-Bashir appointees will cling to power or select one of their own to succeed him. Thousands of people continue to gather at a sit-in outside the military headquarters in Khartoum set up April 6. The country's military rulers have transferred al-Bashir to prison, a family source said yesterday. Since his removal by the military last Thursday, al-Bashir had been detained under heavy guard in the presidential residence inside the compound that also houses the Defense Ministry, the family sources said. Sudan's military rulers have made some concessions to protesters, including the sacking on Tuesday of Prosecutor General Omer Ahmed Mohamed, but demonstrators still fear their uprising could be hijacked.