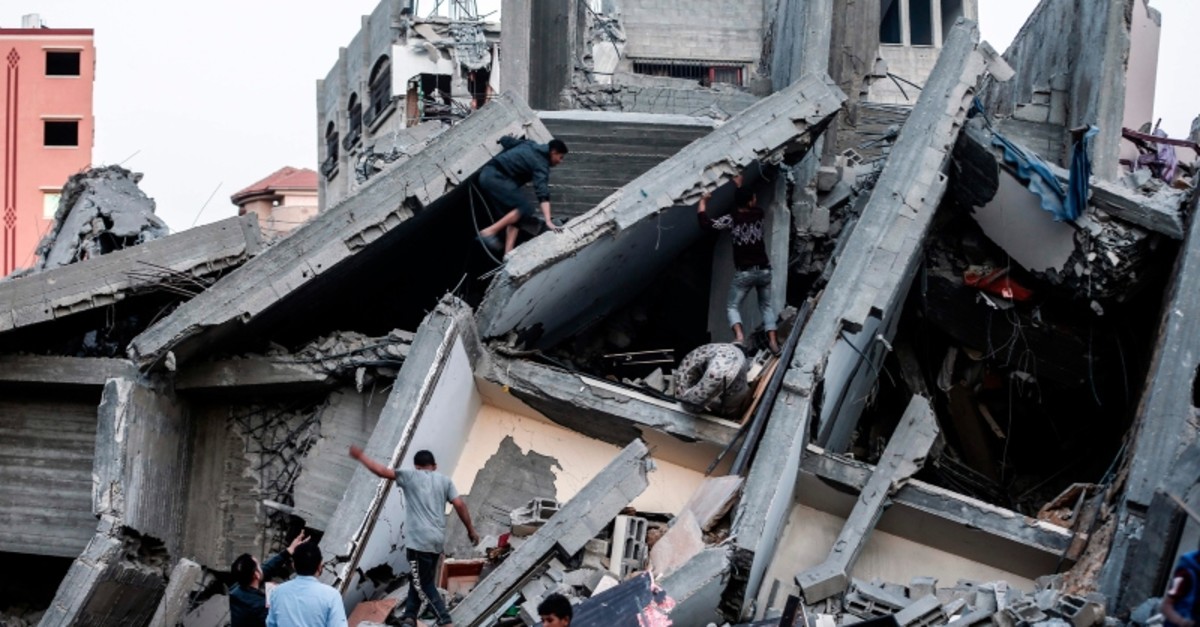 VIDEO — Gazan imam continues to recite the Quran even as Israeli airstrikes continue to pound the illegally blockaded enclavehttps://t.co/CE4bCxzApc pic.twitter.com/3A7KuY1IZh

The Israeli Cabinet is scheduled to convene later Sunday to discuss the current escalation in Gaza.

The toll of Palestinians killed Sunday in the Gaza Strip rose to 18, the enclave's health ministry said, as Israel carried out a series of airstrikes.

The ministry said three people, including a pregnant woman, were killed in northern Gaza and two in southern Gaza, raising an earlier toll of seven.

Three members of the same family, including an infant, were later reported dead after an airstrike hit their home in northern Gaza, pushing the death toll over 20. Witnesses said the airstrike hit a multi-story apartment building in Beit Lahiya.

On Sunday, two Israelis were killed and another was injured by a rocket attack in southern Israel.

"A 40-year-old man and a 22-year-old man were killed by a direct rocket hit on a factory in Ashkelon city," Magen David Adom, Israel's national emergency agency, said in a statement.

"Another, 50, was moderately wounded and transferred to the hospital for treatment," it added.

Palestinian resistance factions, meanwhile, announced in a joint statement Sunday that they had targeted Beersheba and Ashkelon with dozens of rockets "in response to the Israeli targeting of safe houses in the Gaza Strip."

Israel has in total killed 24 civilians and left 154 others injured so far in continuing assaults since Saturday, Palestinian Health Ministry said.

Also on Saturday, a building where Anadolu Agency's office in Gaza was located was razed by Israeli warplanes. No deaths or injuries were reported in the attack.

The escalation in the Gaza strip started when four Palestinians were killed, including a teenager, and 51 wounded on Friday in Israeli attacks on Hamas-affiliated sites and a separate attack on a Palestinian rally against the decade-long occupation and siege of the Gaza strip.