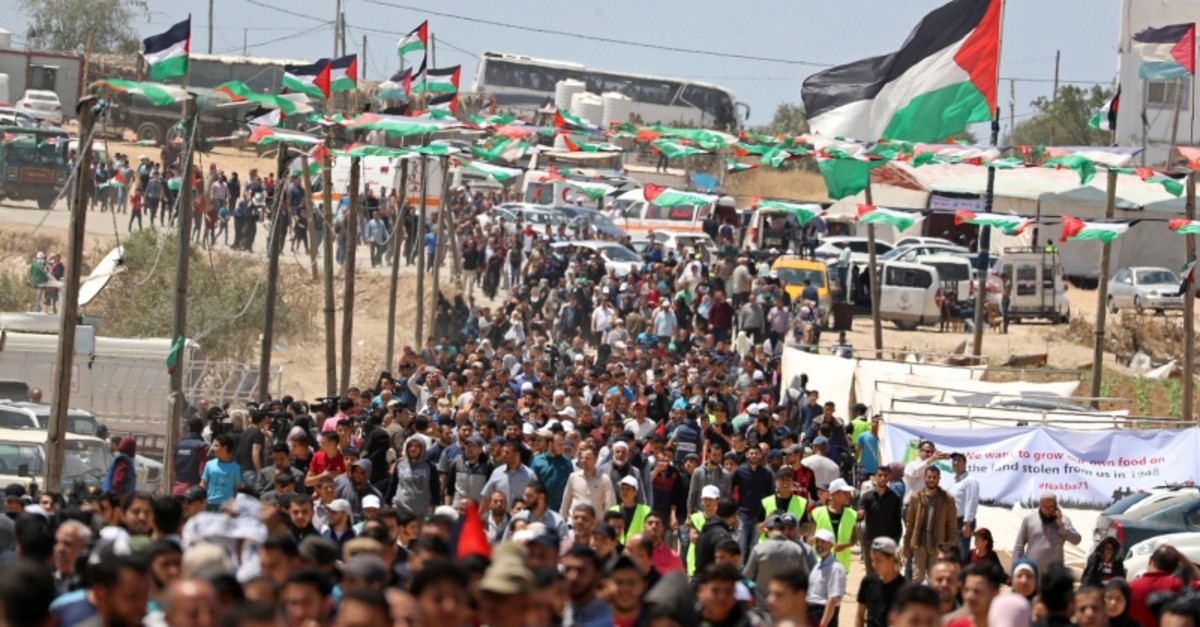 Palestinians gather to mark the 71st anniversary of the 'Nakba,' when hundreds of thousands were forced from their homes in the war surrounding Israel's independence in 1948, near the Israel-Gaza border, east of Gaza City, May 15, 2019. (Reuters)
by Daily Sabah with Agencies May 15, 2019 2:33 pm

Dozens of Palestinian protesters were injured Wednesday when Israeli troops opened fire on a demonstration near the Gaza-Israel buffer zone, held to mark the 71st anniversary of the Palestinian Nakba ("Catastrophe").

Marked on May 15 of each year, Nakba Day commemorates the expulsion in 1948 of hundreds of thousands of Palestinians from their homes in historical Palestine to make way for the new state of Israel.

Earlier Wednesday, eyewitnesses said that Israeli soldiers showered the demonstrators with sewage water and also fired tear gas canisters and rubber bullets to disperse them and keep them away from the border fence.

An Israeli army spokeswoman said some 1,200 rioters and demonstrators were protesting at the border fence and that the army used riot dispersal means.

The government of Gaza warned "the Israeli enemy" against "committing follies against peaceful demonstrators."

The Hamas-run al-Aqsa Radio station reported that thousands are expected to join the Nakba March in eastern Gaza, which is organized by the highest commission of the Great March of Return.

In the Gaza Strip, government institutions and commercial shops shut their doors in line with a call by the National Authority for Breaking the Siege – composed of several Gaza-based resistance factions – for staging a general strike.

For over a year, Palestinians in Gaza have been holding weekly protests along the border fence. They are calling for the right of return of Palestinian refugees and their descendants to the territory of today's Israel, as well as for an end to the 12-year-long blockade imposed by Israel.

According to the Hamas-run Gazan Health Ministry, since the launch of the demonstrations, the Israeli army has shot and killed 305 Palestinian demonstrators, including 59 children and 10 women.

In the West Bank city of Ramallah, hundreds of people marched from the grave of the late Palestinian leader Yasser Arafat to a rally downtown, demanding the right to return to lost properties in what is now Israel.

Sirens also wailed across the West Bank at noon in an expression of sadness.

Nakba Day was first commemorated in 1998 after Palestinian Liberation Organization (PLO) leader Yasser Arafat called on all Palestinians to remember the events that happened in 1948.

The day the tragedy when Israeli militia forces coerced as many as 750,000 Palestinians to flee from their lands. As the population has increased over time, the number of stateless Palestinians has reached 8 million. Many Palestinians have been left with no choice but to leave their lands and seek another country's passport.

Since its establishment, Israel's wars have resulted in a strikingly unequal loss of life on either side of the conflict. After the decision was made to migrate to Palestinian lands in the first Zionist Congress in 1897, Jews gradually moved to Palestine. After World War I and World War II, the number of Jews migrating to Palestine increased dramatically. In 1948, Israel started an independence war against Arab countries, which was called "Nakba" by Palestinians, as more than 1 million Arabs were displaced.

In 1948, Israel killed nearly 20,000 Palestinians and several thousand Arab soldiers, while it lost about 4,000 soldiers and 2,000 civilians. In the second Israeli-Arab conflict in 1956-1957, Israel lost 231 soldiers, while 1,650 Egyptian soldiers were killed, and there were hundreds of civilian casualties.

In one of the biggest Israeli-Arab wars in 1973, a total of 776 Israeli soldiers were killed, but the death toll on the Arab side was much higher, as 15,000 Egyptians, 6,000 Jordanians and 1,000 Syrians were killed, and more than half a million Palestinians were displaced. In 1978, Israel lost 18 soldiers, while 1,200 Lebanese and Palestinian people were killed.

The war in Lebanon in 1982 was another catastrophe for Muslim Arabs. While the civil war was continuing in the country, Israel and pro-Israel rightists and Christian factions massacred 17,825 Arabs under the leadership of former Israeli Prime Minister Ariel Sharon, who was famous for saying, "When I see dead Palestinians, while I am on the tank, I feel so happy." For three days, Muslim Arabs were murdered, raped and brutally executed. During the brutal attacks, 670 Israeli soldiers died. The massacres, which happened in the Shatila refugee camp and Sabra area, have been marked as some of the bloodiest in recent history.