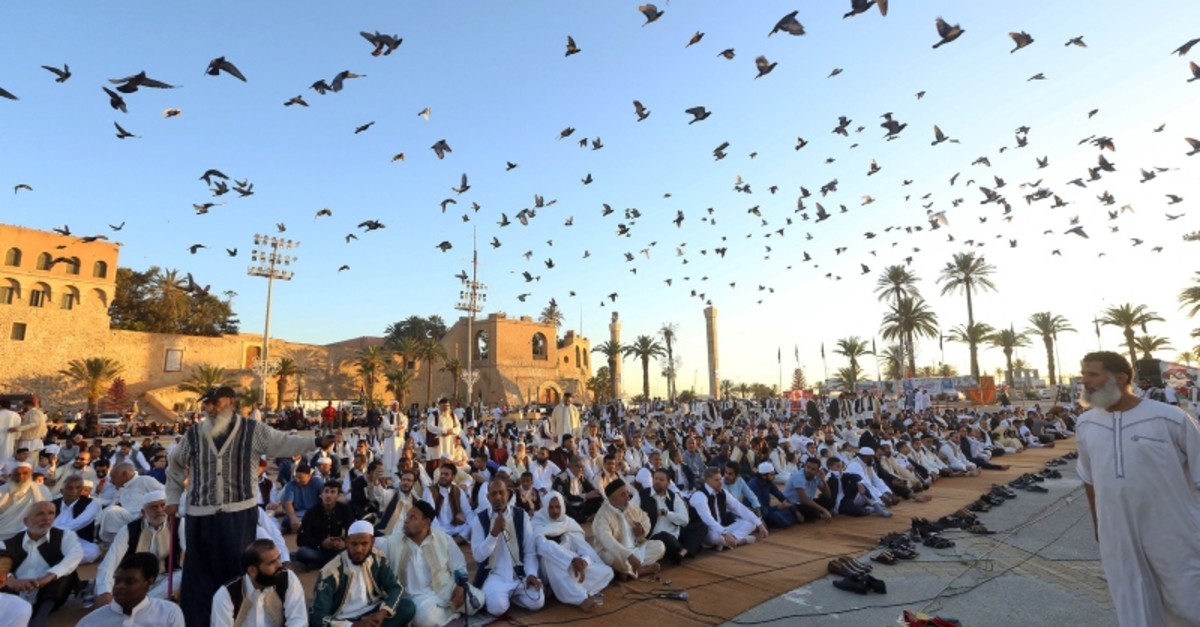 Muslims across the Middle East and beyond began Tuesday marking the Islamic holiday of Eid al-Fitr, one of the most celebrated holidays for the world's 1.5 billion Muslims, amid confusion about the start of the three-day holiday fed partly by political differences.

The holiday marks the end of the holy month of Ramadan, when devout Muslims fast from sunrise to sunset. But the start of the holiday varies from country to country — with splits even within the same country — because the start of Eid is traditionally based on sightings of the new moon, which sometimes varies according to geographic location.

As with everything else in the Middle East, politics often plays a part — seemingly this year more than others — with countries that traditionally followed Saudi Arabia's lead breaking with it this year, including the Palestinians and Jordan.

Muslim Sunni powerhouse Saudi Arabia, as well as Kuwait, Qatar and the United Arab Emirates, announced the first day of Eid is Tuesday, whereas Egypt, Syria, Jordan, the Palestinian territories and others said the Shawwal crescent moon was not visible across the country and won't start till Wednesday.

In Gaza, mosques blared with Eid calls Monday evening, shortly after Saudi Arabia announced the end of Ramadan, only to be interrupted swiftly when the Palestinian Grand Mufti in Jerusalem said they could not spot the crescent, thus extending Ramadan by one more day.

An Imam at al-Khalidi mosque on the Gaza City beach apologized and told worshippers: "We can't but follow the instructions of our Mufti," and asked them to stay in the mosque for the Ramadan night prayer known as Taraweeh.

It was not clear why Gaza did not follow Saudi Arabia's lead, as it usually does. But the change by the local Islamic authorities drew anger, jokes and criticism on social media. Some posts urged the faithful to wake up in the morning and eat, pretending they did not know the Eid decision had changed.

Other criticism was more serious. One post complained the change in timing "stripped our children of Eid happiness."

In Jordan, the announcement Monday evening that Tuesday would be the last day of Ramadan and that Wednesday would be the first day of Eid triggered jokes on social media, including one that said Jordan is now officially an "adult" and can make its own decisions.

Ordinarily a time for family and festivities, this year's Eid comes amid war and turmoil in more than one country — and that translated into more Eid confusion. In Sudan, where the ruling military just conducted a deadly crackdown against pro-democracy protesters, killing at least 35, activists defied the government's decree on when Eid starts.

Sudanese protesters have camped for months outside the military's headquarters as the two sides negotiated over who would run the country after longtime strongman Omar al-Bashir's ouster in April. On Monday, the military had had enough and moved to crush the protest movement, overrunning the main sit-in site in the capital, unleashing furious volleys of gunfire, beating protesters with sticks and burning down tents.

At night, the state-run SUNA news agency announced that the country will celebrate the first day of Eid on Wednesday. But the Sudanese Professionals' Association (SPA), which has spearheaded the protests, followed the lead of most Arab and Islamic countries and declared Tuesday as the first day of Eid, according to astronomers at Khartoum University — apparently in defiance of the military council.

The SPA urged people across the country to "pray for the martyrs" in their Eid prayers and take to the streets to protest.

Mohammed Yousef al-Mustafa, a spokesman for the SPA, said the military authorities announced Tuesday as a fasting day in efforts to keep people in their homes after Monday's "massacre."

Sudan's official council for Islamic jurisprudence, however, which presumably functions under the auspices of the country's ruling Transitional Military Council (TMC), has said that the Eid al-Fitr -- which marks the end of the Ramadan fasting month -- would begin Wednesday.

According to witnesses, much of the Sudanese public in Khartoum has appeared to take the side of the opposition, ending the Ramadan fast and performing Eid al-Fitr prayers at mosques throughout the capital. Many others, however, continued to fast on Tuesday, following the instructions of the government-run jurisprudential council, witnesses said.

Libya's Tripoli-based government on Tuesday officially announced the end of the Ramadan fasting month and the start of the Eid al-Fitr holiday -- only to reverse the decision hours later.

In an initial announcement Tuesday morning, Libya's Religious Endowments (Waqf) Authority, which is affiliated with the Tripoli-based Government of National Accord, announced that the post-Ramadan Eid al-Fitr holiday would officially begin on Wednesday.

But only hours later, the same body -- citing the appearance of the new moon in several parts of the country -- reversed the decision, saying the three-day Eid al-Fitr would, in fact, officially kick off on Tuesday.

Meanwhile, religious authorities in the eastern city of Al-Bayda, the seat of a rival Libyan government, issued their own decree -- likewise citing the appearance of the new moon -- also proclaiming Tuesday as the first day of Eid.

Libya's political stage has been dogged by confusion since 2011, when a NATO-backed uprising led to the ouster and death of long-serving leader Muammar Gadhafi after four decades in power.

Since then, the country's stark political divisions have yielded two rival seats of power: one in capital Tripoli, which enjoys U.N. recognition, and another in Al-Bayda.

In Yemen, the internationally recognized government said Tuesday is the first day of Eid, while the Shiite Houthi rebels who control much of the country including the capital, Sanaa, announced that Eid starts on Wednesday. It was the first time in Yemen's modern history that its people were split over celebrating Eid.

In Afghanistan, Shiites were told by clerics that the moon was not seen so Ramadan would not begin for them until Wednesday. Sunnis however are celebrating Tuesday. The Taliban, which are Sunni hard-liners, have said there will be no end to fighting while U.S. and NATO troops are still in Afghanistan.

Pakistan, which is mostly Sunni, traditionally celebrates a day after most of the Muslim world. Pakistan is also split within the country along geographical lines, with residents of Khyber Pukhtunkhwa province, located on the border with Afghanistan and dominated by ethnic Pashtuns, celebrating Eid on Tuesday. The new moon was apparently spotted in North Waziristan, while the rest of Pakistan will celebrate on Wednesday.

In Lebanon and Iraq, Sunnis began celebrating on Tuesday whereas Shiites will celebrate on Wednesday.

The holiday traditionally lasts one to three days and is eagerly anticipated after the month of fasting. During Ramadan, the faithful refrain from eating, drinking, smoking or sexual activity from dawn to dusk.

Most businesses close during Eid, as people dress up and visit relatives, enjoying their first daytime meals in a lunar month. Mosques hold special prayers at sunrise, and children are often given gifts or a special allowance.

Countries across Africa also celebrated, with leaders and diplomats from Niger to Somalia to Burundi sharing best wishes and praying for peace in regions threatened by extremism.

Niger's President Mahamadou Issoufou said his thoughts were with families of security forces killed while confronting jihadists in the West African nation, one of the world's poorest countries. At least 28 soldiers were killed there in an ambush last month claimed by the Islamic State West Africa Province.

Across the continent in one of the world's most closed-off countries, Eritrea's Information Minister Yemane Gebremeskel posted photos of Eid prayers in the capital, Asmara.
RELATED TOPICS