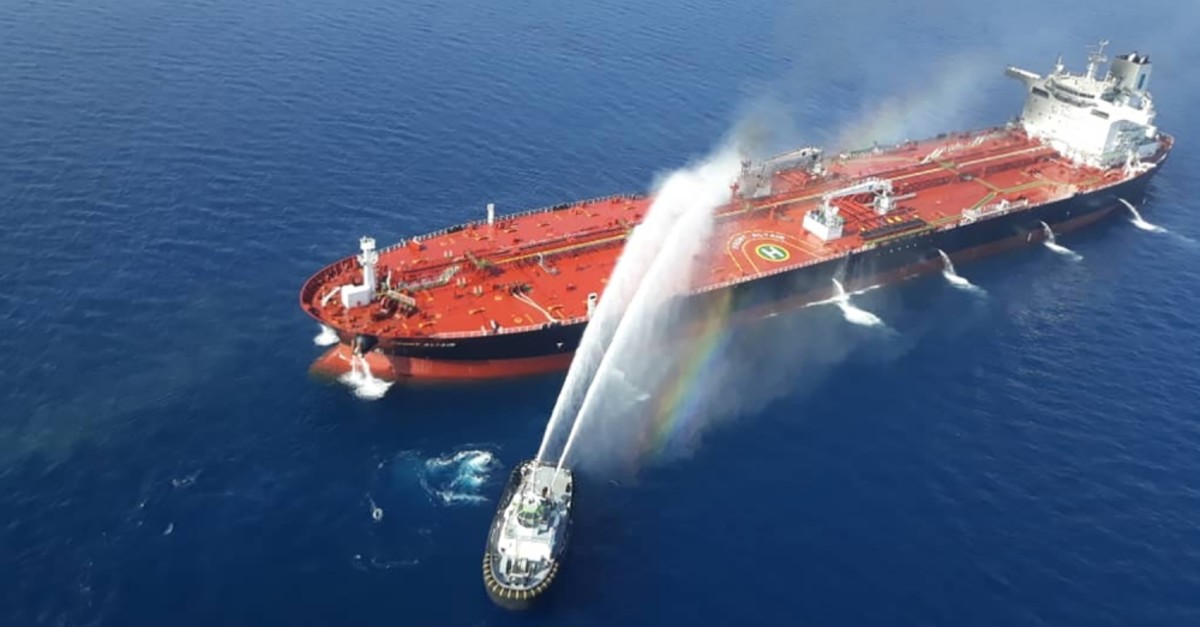 Iran accused the United States of playing a dangerous 'blame game' on Friday after apparent attacks on two tankers in the Gulf of Oman, which Washington says Tehran was behind.

The accusation, voiced by US Secretary of State Mike Pompeo following the incident on Thursday, is "ridiculous, but also very worrying and dangerous," Iranian Foreign Ministry spokesman Abbas Mousavi said, according to state news agency IRNA.

President Donald Trump in a televised interview accused Iran of executing the twin tanker attacks in the Gulf of Oman, saying the incident had Iran "written all over it."

"Iran did do it," Trump said after the US military released footage it said showed an Iranian patrol boat removing an "unexploded limpet mine" from one of the tankers.

"You know they did it because you saw the boat," Trump said. "I guess one of the mines didn't explode and it's probably got essentially Iran written all over it."

Mousavi added that the focus should be on who stands to profit the most from a crisis, rather than spreading baseless insinuations.

The Japanese operator of one of the tankers that were hit near the busy Strait of Hormuz said crew members saw an incoming "flying object" before the explosion. Speaking at a news conference in Tokyo, Kokuka Sangyo president Yutaka Katada said the Kokuka Courageous, which was carrying 25,000 tons of methanol from Saudi Arabia to Singapore, was attacked twice but denied it had been hit by a torpedo. Katada said the tanker suffered two explosions, several hours apart. The crew saw the flying object only before the second explosion.

All of the tanker's Filipino crew members returned to the ship after the explosion to restore the power system.

The Kokuka Courageous and the Norwegian-owned Front Altair were hit by explosions near the Strait of Hormuz, a key shipping route for oil between Iran and the Arabian Peninsula, early Thursday. As a result, the Front Altair was set on fire, which was extinguished later Thursday. Efforts to cool the ship were ongoing. A specialist team was due Saturday to inspect the vessel. The 23-strong crew was heading for Bandar Abbas in Iran prior to repatriation, the Norwegian shipping company said in a statement.

Pompeo said his assessment that Iran was to blame was based on intelligence, the types of weapons used and the sophisticated nature of the attacks. The diplomat framed it as an attempt by Iran to force the US to lift crippling sanctions on the Iranian economy. He offered no evidence during his announcement in Washington and did not take questions from reporters. However, hours later US Central Command released a video it said showed crew from an Iranian patrol boat removing an unexploded limpet magnetic mine from the Japanese tanker.

Hours after the initial explosions the boat "was observed and recorded removing the unexploded limpet mine from the M/T Kokuka Courageous," spokesman Bill Urban said in a statement alongside the video. In a tweet, Iranian Foreign Minister Mohammad Javad Zarif said the US was making allegations against Tehran without "a shred of factual or circumstantial evidence" making it "abundantly clear that the #B-Team is moving to a #PlanB: Sabotage diplomacy."

The term "B team" refers to the team led by US National Security Advisor John Bolton, whose hawkish approach to Iran has led Tehran to suspect that he is hoping to force regime change there.

Zarif also said it was "suspicious" that the attack on the Japanese tanker took place while Japanese Prime Minister Shinzō Abe was on a high profile visit to Iran.

"A war in the Middle East Gulf region is something that we all do not want to see," said Chinese Foreign Ministry spokesman Geng Shuang.

The US is currently embroiled in feuds with bo

th countries, as it spars with China over trade and is pushing the international community to abandon the 2015 nuclear deal with Iran.

In comments to the BBC, British Foreign Secretary Jeremy Hunt said he backs the US view that Iran was responsible for Thursday's attacks in the Gulf of Oman. The European Union held back on supporting the claim. "We are assessing the situation and gathering information at present," a senior official said in Brussels.

Norway, too, said it was "too early" to conclude who was responsible.