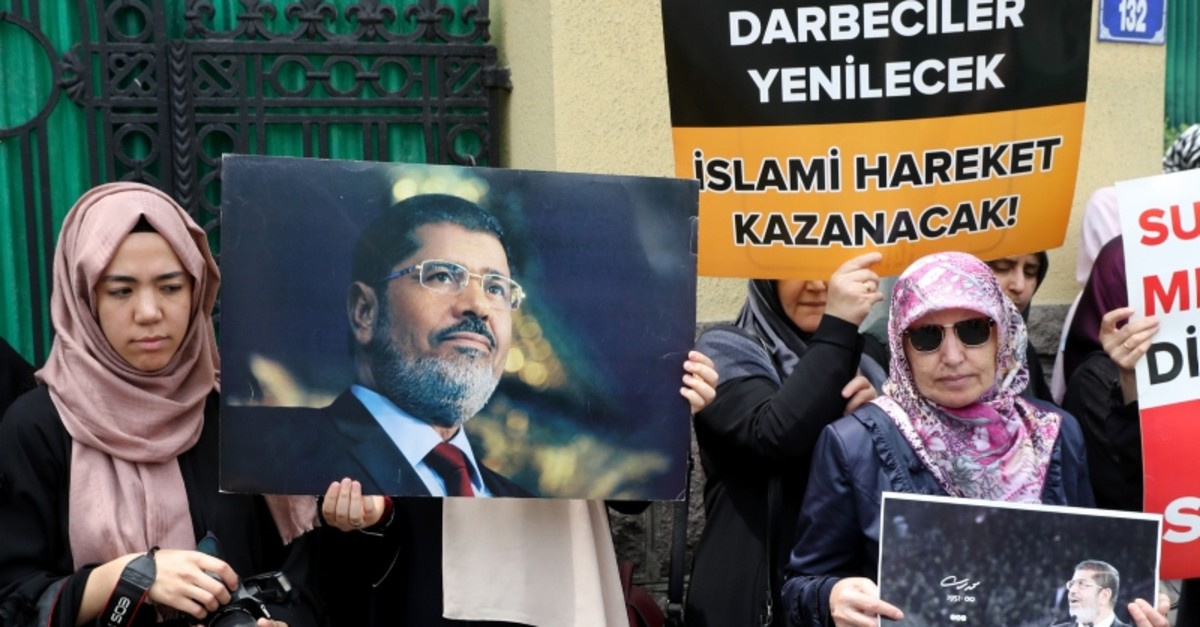 A woman holds a banner reads , The putschists will be defeated, Islamic movement will win , during a symbolic funeral prayer for the Egyptian President Mohamed Morsi on June 18, 2019 in front of the embassy in Ankara. (AFP Photo)
by Compiled from Wire Services Jun 18, 2019 5:16 pm

The U.N. human rights office called Tuesday for an "independent inquiry" into the death of former Egyptian President Mohammed Morsi, who died in state custody.

"Any sudden death in custody must be followed by a prompt, impartial, thorough and transparent investigation carried out by an independent body to clarify the cause of death," said Rupert Colville, spokesman for the United Nations High Commissioner for Human Rights.

A British lawmaker who led a review last year of Morsi's detention also said Tuesday that there should be an independent international probe into his death.

"Dr. Morsi's death in custody is representative of Egypt's inability to treat prisoners in accordance with both Egyptian and international law," Conservative MP Crispin Blunt said.

He said Cairo "has a duty to explain his unfortunate death and there must be proper accountability for his treatment in custody."

"The only step now is a reputable independent international investigation," he said.

Blunt chairs the Independent Detention Review Panel, a group of British MPs and lawyers who published a report in March 2018 into how Morsi was being treated in custody.

They concluded that the former president, who had a history of ill-health including diabetes, liver and kidney disease, was not receiving adequate medical care.

They found that his detention "is below the standard expected by international standards for prisoners, and would constitute cruel, inhuman and degrading treatment."

In a statement on Tuesday, Blunt said: "We feared that if Dr. Morsi was not provided with urgent medical assistance, the damage to his health may be permanent and possibly terminal.

"Sadly, we have been proved right," he said.

He added that the panel had found that Morsi's detention conditions could meet the threshold for torture in Egyptian and international law.

"We found culpability for torture rests not only with direct perpetrators but those who are responsible for or acquiesce in it," he said.

Amnesty International also called for a fair, transparent and comprehensive investigation into Morsi's death and raised questions about his treatment in prison.

Egypt's government has dismissed accusations that he was badly treated.

Morsi was Egypt's first democratically elected president who was ousted in a military coup in 2013, a year after his election. The military crushed the Muslim Brotherhood movement in a major crackdown, arresting Morsi and many others of the group's leaders, who have been in prison undergoing multiple trials ever since the coup.

He was buried on Tuesday after collapsing in a Cairo courtroom.