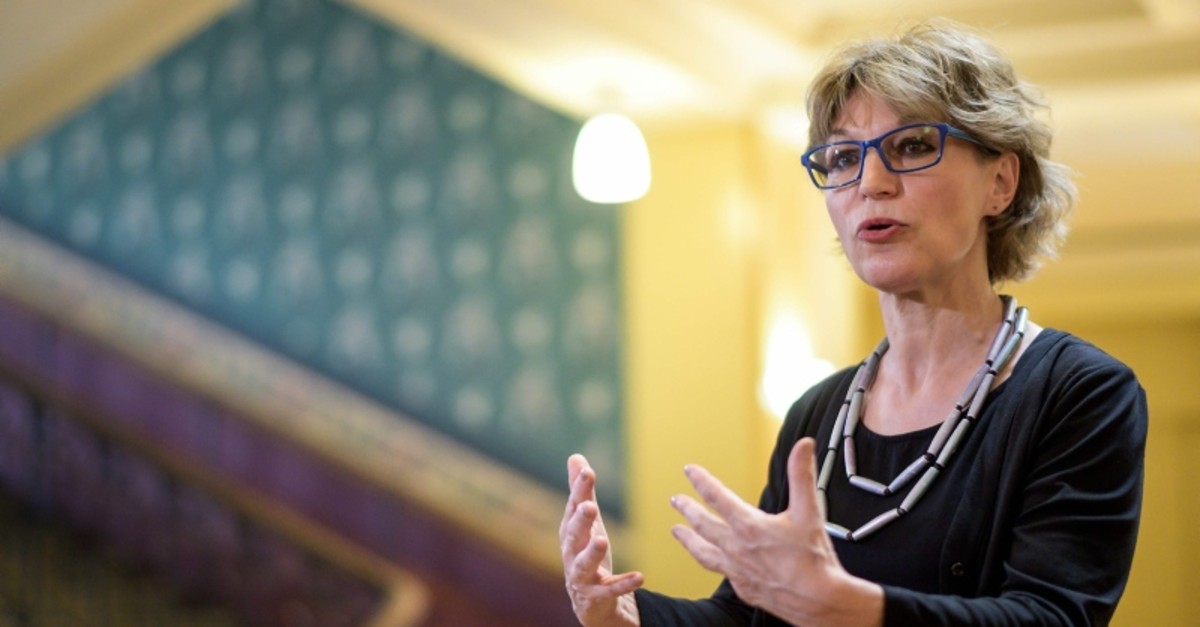 UN special rapporteur on extrajudicial, summary or arbitrary executions Agnes Callamard gestures as she answers questions on a report of the killing of the Saudi journalist Jamal Khashoggi, on June 19, 2019 in Geneva. (AFP Photo)
by Daily Sabah with Agencies Jun 19, 2019 1:12 pm

Callamard released a 101-page report into the October killing of Khashoggi at the Saudi consulate in Istanbul that lays out dozens of recommendations. It calls on U.N. bodies or Secretary-General Antonio Guterres to "demand" a follow-up criminal investigation.

Khashoggi, a critic of the prince and a Washington Post columnist, was killed in the consulate on Oct. 2, 2018 by a team of 15, consisting of Saudi officials who arrived in Turkey for his murder and a cover-up team also in charge of dismembering Khashoggi's body. He was to receive papers ahead of his wedding with his Turkish fiancee Hatice Cengiz.

Although it has been more than eight months, no one still knows the fate of Khashoggi's body.

"It is the conclusion of the Special Rapporteur that Mr. Khashoggi has been the victim of a deliberate, premeditated execution, an extrajudicial killing for which the state of Saudi Arabia is responsible under international human rights law," Callamard said in her report based on a six-month investigation.

Soon after the report was released, Foreign Minister Mevlüt Çavuşoğlu took to Twitter to express Turkey's endorsement of Callamard's recommendations for holding those responsible accountable and thanked the U.N. for elucidating Saudi journalist's murder.

Callamard went to Turkey earlier this year with a team of forensic and legal experts and said she received evidence from Turkish authorities.

"There is credible evidence, warranting further investigation of high-level Saudi officials' individual liability, including the Crown Prince's," she said.

"Indeed, this human rights inquiry has shown that there is sufficient credible evidence regarding the responsibility of the Crown Prince demanding further investigation," she added, urging U.N. Secretary-General to establish an international probe.

Callamard noted the "extreme sensitivity" of considering the criminal responsibility of the crown prince, as well as Saud Al Qahtani, a senior adviser to the Saudi royal court who has not been charged.

"No conclusion is made as to guilt," she wrote of the two men. "The only conclusion made is that there is credible evidence meriting further investigation."

She wrote that there was "no reason why sanctions should not be applied against the Crown Prince and his personal assets" — noting that sanctions regimes have been put in place in the past even before guilt was determined.

But she played down the focus on a single person, writing: "The search for justice and accountability is not singularly dependent on finding a 'smoking gun' or the person holding it."

She wrote that her focus was mainly on identifying those who may have failed in or abused their positions of authority.

Riyadh must accept responsibility for the murder of the journalist and pay reparations to his family, and also apologize to the Turkish government, where the crime was committed, Callamard added.

Turkish officials have repeatedly suggested the murder trial be held in Turkey where the crime was committed. Saudi authorities have denied Turkey's requests and said the suspects will be tried in the kingdom.

Turkey also arrested two intelligence operatives in Istanbul who confessed to spying on Arab nationals on behalf of the United Arab Emirates (UAE), one of whom is suspected of having connections to the murder of dissident Saudi journalist Khashoggi.

She said she had received information about a "financial package" offered to Khashoggi's children, "but it is questionable whether such package amounts to compensation under international human rights law."

Callamard said for instance that she had found evidence that "Khashoggi was himself fully aware of the powers held by the Crown Prince, and fearful of him."

She urged Guterres to launch an official international criminal investigation into the case, which she said would make it possible to "build-up strong files on each of the alleged perpetrators and identify mechanisms for formal accountability, such as an ad hoc or hybrid tribunal."

For her investigation, Callamard said that, among other things, she had viewed CCTV footage from inside the consulate of the killing itself.

The report identified by name the 15 people she said were part of the mission to kill Khashoggi, and suggested that many of them were not on the list of 11 unnamed suspects facing a closed-door trial over the murder, and five could face the death penalty.

Wednesday's report also found that there was evidence that "Saudi Arabia deliberately used consular immunity to stall Turkey's investigations until the crime scene could be thoroughly cleaned."

"In view of my concerns regarding the fairness of the trial of the 11 suspects in Saudi Arabia, I call for the suspension of the trial," she said in the report.

Callamard noted limitations on her inquiry, which began in January. She received no response to her request to travel to Saudi Arabia. She wrote that she had received only a total of 45 minutes of tapes recorded within the consulate around the time of the killing, while Turkish intelligence had referenced some 7 hours of recordings.

The report offers gruesome, nearly minute-by-minute accounting of the events surrounding the killing, and cites sounds of a buzzing saw that could have been used to dismember Khashoggi's body.

The U.S. State Department has publicly designated 16 people for their roles in the killing of Khashoggi. Many U.S. lawmakers have criticized President Donald Trump for not condemning Saudi Arabia for the journalist's killing.