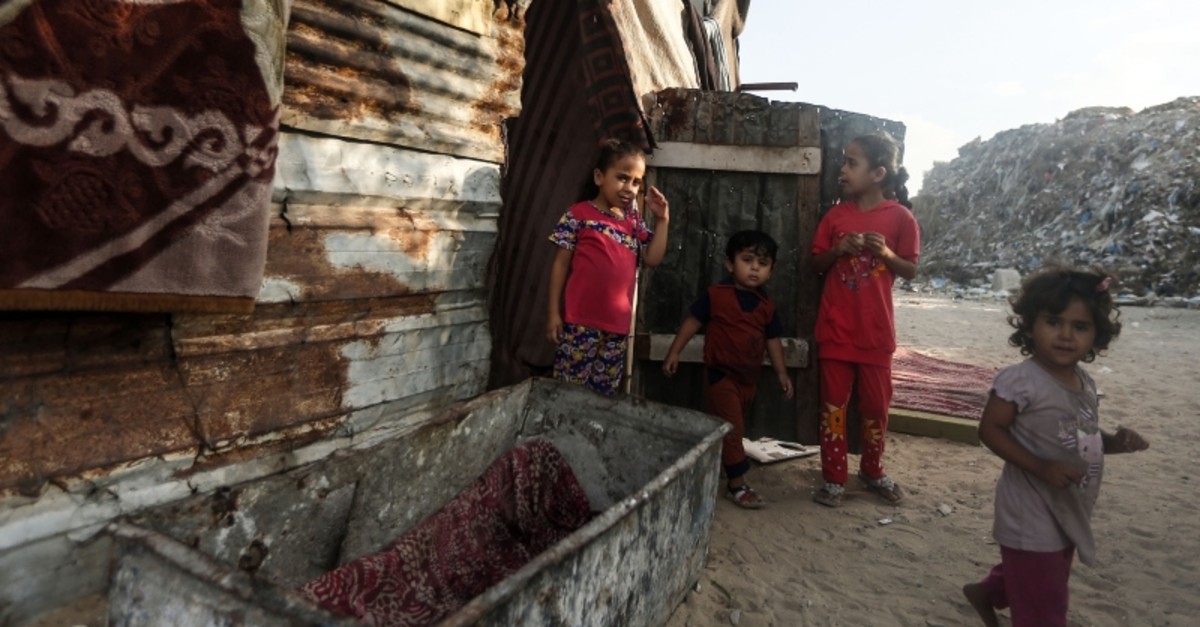 Palestinian children gather in front of a tin house in an impoverished neighborhood of the Khan Younis Refugee Camp in southern Gaza Strip on Aug. 25, 2018. (AFP Photo)
by Anadolu Agency Jun 26, 2019 9:46 am

Speaking at an aid commitment conference at U.N. headquarters, Sinirlioğlu said 2018 was an "extraordinarily challenging year" for UNRWA.

"But at the same time, remarkable mobilization and support have been provided for its survival."

Turkey will also deliver $1 million to the Organization of Islamic Cooperation's (OIC) Waqf Fund which was approved by the U.N. earlier this year after the U.S. cut off funding to UNRWA, significantly diminishing its resources.

Prior to the U.S. move, Washington was the largest donor to UNRWA, providing about $350 million annually, equivalent to about one quarter of the agency's annual budget.

UNRWA is responsible for a number of critical programs for more than 5 million Palestinians, providing such things as schooling, health services and food security.

The agency had been facing financial problems even before the U.S. aid cut.

According to UNRWA's employees' union, funding cuts have forced the agency to close its mental health program, which had provided direct services to Palestinian refugees in Gaza and had employed about 430 people.

The funds coming from Turkey will be used in part towards reconstruction projects, according to Sinirlioğlu.

"It is clear that the role played by UNRWA is vital until a just and durable solution is reached in accordance with UN resolutions," he said.

"At stake are the rights and dignity of Palestine refugees and regional stability."

After World War I and World War II, the number of Jews migrating to Palestine increased dramatically. In 1948, Israel started a war against Arab countries. At the end of the war, the "Nakba" (the great catastrophe) occurred as more than a million Arabs were displaced. In 1948, Israel killed nearly 20,000 Palestinians and several thousand Arab soldiers, while it lost around 4,000 soldiers and 2,000 civilians. In the second Israeli-Arab conflict, in 1956-57, Israel lost 231 soldiers, while 1,650 Egyptian soldiers were killed, and there were hundreds of civilian casualties. In one of the biggest Israeli-Arab wars in 1973, a total of 776 Israeli soldiers were killed, but the death toll on the Arab side was much higher – some 15,000 Egyptians, 6,000 Jordanians and 1,000 Syrians were killed and more than 500,000 Palestinians were displaced. However, the aggression against the Palestinians did not stop there and continues until today, causing many more to be killed and displaced.