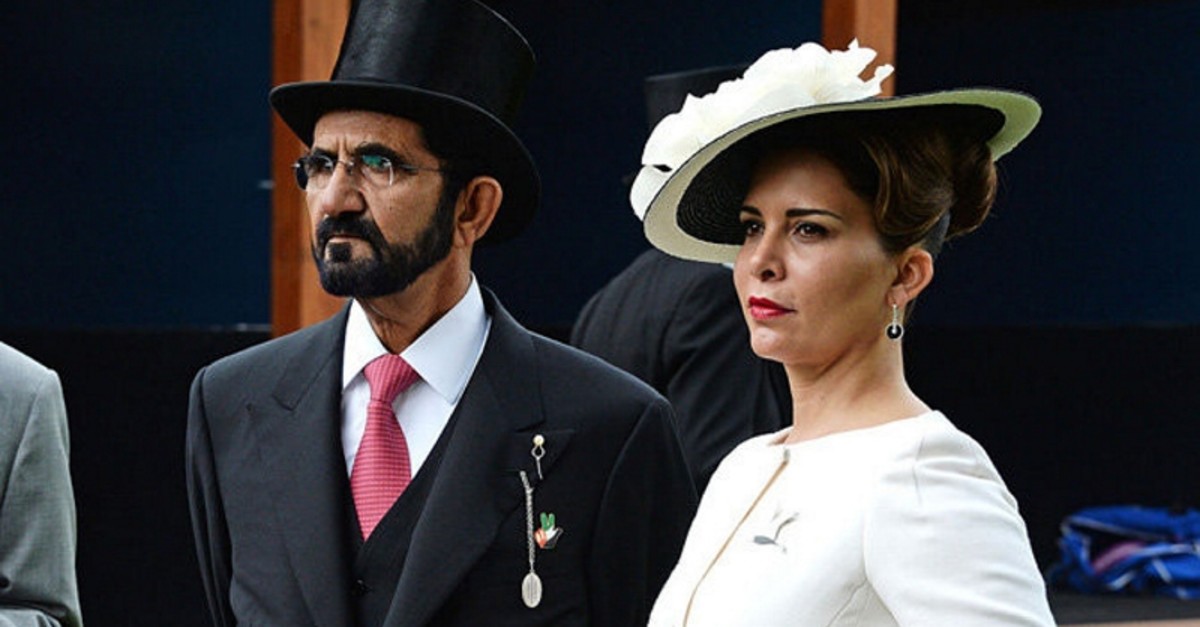 A dispute between the ruler of Dubai and his estranged wife over the welfare of their two young children will play out over the next two days in a London courtroom amid reports the princess has fled the Gulf emirate.

The princess is believed to be in Britain, where she owns a gated mansion on Kensington Palace Gardens, a private street lined with some of the world's most expensive homes and cars.

The case is subject to reporting restrictions. At the judge's direction yesterday, only journalists with certified press credentials through media based within the jurisdiction of England and Wales were allowed to sit in on the proceedings. The two-day hearing is set to continue today.

The clash between Sheikh Mohammed and Princess Haya is the latest sign of trouble in his extended family. Last year, a daughter of Sheikh Mohammed tried to flee Dubai after appearing in a 40-minute video saying she had been imprisoned on and off for several years and had been abused. Her friends say she was forcibly returned after commandos stormed a boat carrying her off the coast of India when she tried to flee the Emirates.

The sheikh, who is the vice president and prime minister of the United Arab Emirates in addition to being the ruler of Dubai, is among the most influential figures in the Middle East. He also composes poetry, a long tradition among Gulf Arabs, and it was his own words that sparked the initial rumors that Haya had fled Dubai.

The talk started after a verified Emirati Instagram account followed by the Dubai ruler's son posted a poem in June attributed to Sheikh Mohammed. The poem, titled "You Lived and You Died," is about disloyalty, leading to speculation it is about Princess Haya.

"You betrayed the most precious trust, and your game has been revealed," the poem says. "Your time of lying is over and it doesn't matter what we were nor what you are."

The harsh words caused reverberations and speculation throughout royal circles in the Middle East and beyond.

The princess, 45, and Sheikh Mohammed, 69, were married in 2004 and have a daughter, 11, and son, 7, together. Both were educated at elite English universities and they share a love for horses.

Media reports indicate she took the children with her when she left Dubai. Under Islamic law, a woman can at least nominally retain custody of her children in a divorce. Nonetheless, decisions about schooling, travel and lifestyles of the children often remain with the father in the Middle East. Given the Dubai ruler's power, it is unlikely Princess Haya would have had a say in her children's ability to leave the UAE had she not reportedly fled with them.

Haya's half-brother is Jordan's current monarch, King Abdullah, who was pictured at her side when she wed Dubai's ruler, reportedly becoming his sixth wife.

Haya has long stood out from other wives of Gulf Arab rulers not only because of her Jordanian royal background and Olympic ambitions, but because she was seen and photographed in public. Most rulers' wives in the Gulf are never photographed and their faces and names aren't known to the public. But Princess Haya wasn't only visible at humanitarian events, often seated front row in Dubai by her husband's side, but was a stylish fixture in glossy magazines and at prestigious equestrian events in the U.K,, like the Royal Ascot and Epsom Derby.

In a 2009 Daily Mail interview, the princess said she deliberately postponed marriage until she could meet a man "who doesn't feel he has to mold me."

She was quoted as saying, "You have to accept that you're in control of yourself but not your destiny."

The government of Dubai hasn't commented on the media reports about Princess Haya fleeing with her children to Europe.