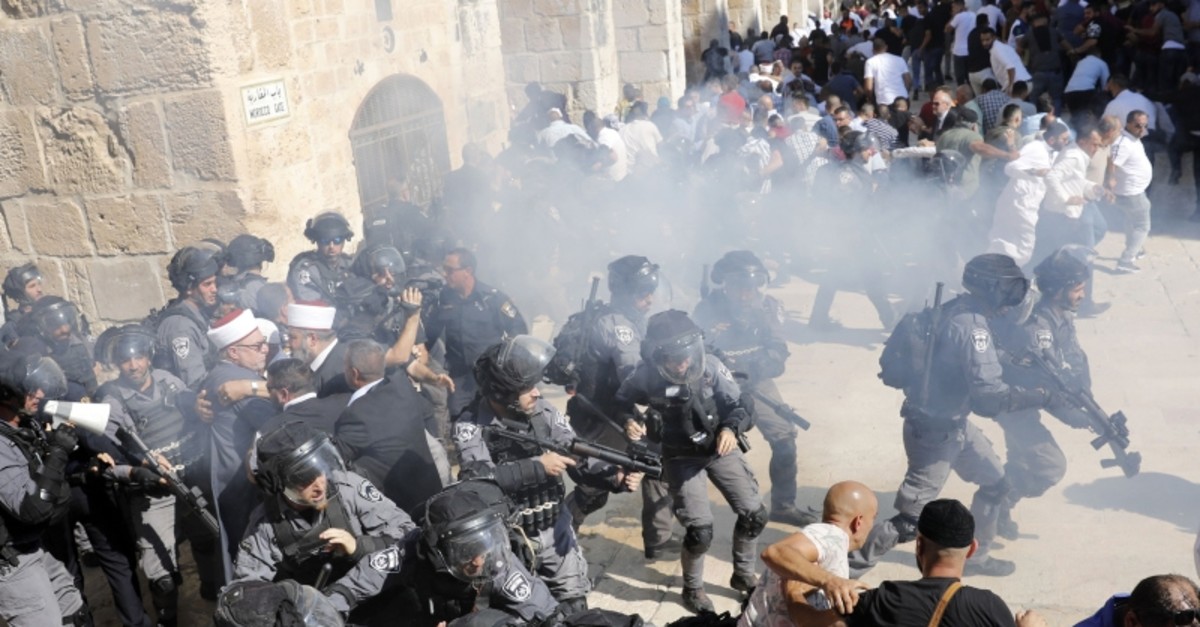 Israeli security forces fire sound grenades inside the Al-Aqsa Mosque compound in the Old City of Jerusalem on August 11, 2019, as clashes broke out. (AFP Photo)
by Compiled from Wire Services Aug 11, 2019 2:50 pm

"A number of Palestinians were injured during clashes with Israeli forces inside the Al-Aqsa mosque compound," said Firas al-Dibs, a spokesman for Jerusalem's Jordan-run Religious Endowments Authority.

"The Palestinians were injured while they were preventing Jewish settlers from storming the holy mosque," he added.

"The worshipers were moderately injured and 14 of them were transferred to hospitals for further treatment," it added.

Earlier on Sunday, Israeli police prevented settlers from storming the Al-Aqsa Mosque, Israeli media reported. The police cited the presence of tens of thousands of Palestinian worshipers and the high possibility of clashes.

Jews are also observing on Sunday the Ninth of Av (Tisha B'av), a day of fasting and mourning for the destruction of the two Biblical temples which stood at the site in antiquity.

Extremist Jewish organizations, known widely as Temple Mount groups, had called for massive raids on the Al-Aqsa during this week.

Israeli police reversed their decision after the clashes broke out and allowed settlers to enter. Several dozen entered the site under close police escort and Muslim worshippers began throwing chairs and other objects at the group. The Jewish visitors left the compound shortly thereafter.

Jerusalem District police commander Doron Yedid told Israeli media that the decision to allow Jewish visitors to enter the site was made "with the backing of the top political officials."

The reversal came after Israeli Prime Minister Benjamin Netanyahu's religious nationalist allies called for the site to be opened to Jewish visitors. Israelis are headed to unprecedented repeat elections on September 17 after Netanyahu failed to form a government following April's elections. Netanyahu is widely seen as wanting to maintain calm.

Israel occupied East Jerusalem during the 1967 Middle East war along with the West Bank and the Gaza Strip. In a move never recognized by the international community, Israel annexed the entire city in 1980, claiming it as the self-proclaimed Jewish state's "eternal and undivided" capital.

Sacred to Muslims, Christians and Jews, Jerusalem is home to the Al-Aqsa Mosque, which for Muslims represents the world's third holiest site after Mecca and Medina in Saudi Arabia. Jews refer to the area as the "Temple Mount," claiming it was the site of two prominent Jewish temples in ancient times. It also includes Church of the Holy Sepulchre, one of the most sacred Christian sites in the world.

Jews are barred from praying at the compound under a longstanding arrangement between Israel and Muslim authorities. Jewish tradition also maintains that Jews should avoid entering the holy site.

But in recent years Israeli religious nationalists have stepped up visits to the site to challenge the arrangement. Jewish extremists have called for destroying the mosque and rebuilding the Biblical temple.

The Palestinians view such visits as provocations, and have long feared that Israel intends to take over the site or partition it. The Israeli government has repeatedly said it has no intention of changing the status quo.

Hanan Ashrawi, a senior leader in the Palestine Liberation Organization, said Israel was "fueling religious tensions in Jerusalem," adding that Israeli officials are "fully responsible for its grave consequences."

Israeli-Palestinian tensions have spiked following President Donald Trump's decision in 2017 to recognize Jerusalem as Israel's capital and move the U.S. Embassy there. The Israeli-Palestinian peace process has been moribund for at least a decade, and the Palestinians have cut ties with the Trump administration over what they see as its unfair bias toward Israel.

In a separate incident on Sunday, Israeli troops killed a Palestinian gunman after he opened fire on them from across the perimeter fence around the Gaza Strip.

The Israeli military said an "armed terrorist" approached the frontier early Sunday and opened fire toward troops on the other side, who responded by shooting at the attacker. The army said a tank also targeted a nearby military post operated by the Hamas group.

The Palestinian Health Ministry in Gaza identified the deceased as 26-year-old Marwan Nasser. It was not clear if he was a member of an armed group, and no one immediately claimed responsibility for the attack.

On Saturday, Israeli troops killed four Palestinian militants who the army said had tried to carry out a cross-border attack. Hamas, which has ruled Gaza since 2007, said the attack was an "individual act" carried out by youths frustrated at the Israeli-Egyptian blockade on Gaza and was not planned by the group.

Regular protests and clashes erupted along the border of the blockaded Gaza Strip in March 2018. At least 302 Palestinians have been killed by Israeli fire in Gaza or the border area since then, the majority during the demonstrations and clashes. Seven Israelis have also been killed in Gaza-related violence.

The protests have declined in intensity in recent months following a U.N. and Egyptian-brokered truce under which Israel agreed to ease aspects of its blockade in return for calm.

Israel and Hamas have fought three wars since 2008.