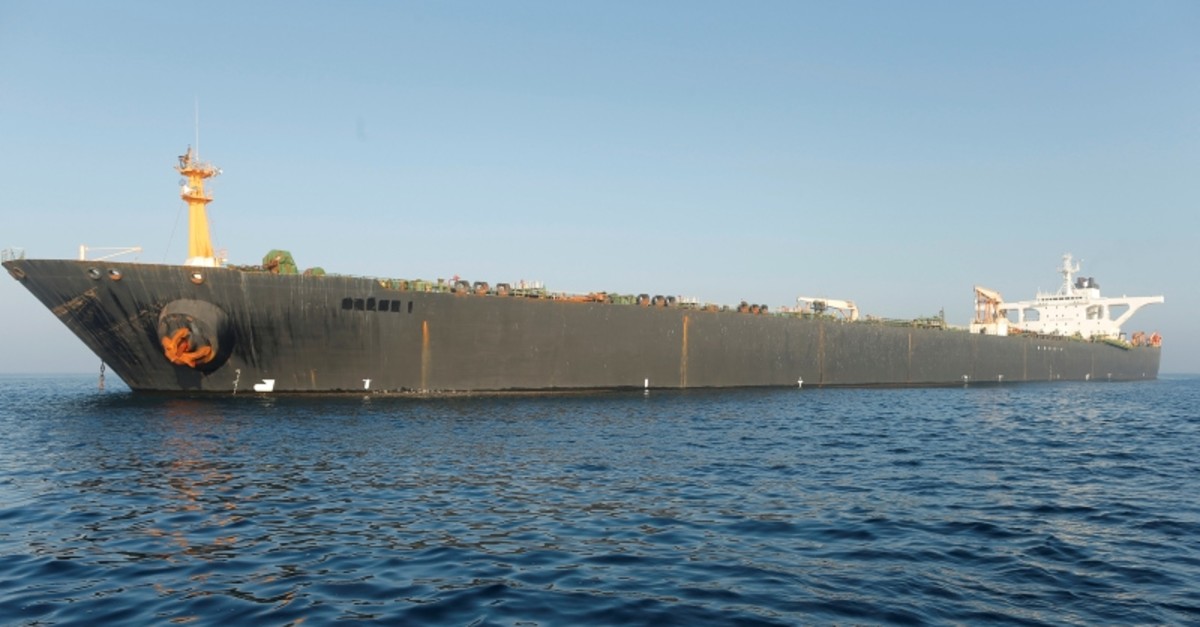 The name of Iranian oil tanker Grace 1 is seen removed as it sits anchored after the Supreme Court of the British territory lifted its detention order, in the Strait of Gibraltar, southern Spain, August 16, 2019. (Reuters Photo)
by Aug 17, 2019 1:39 am

The US Justice Department unveiled a warrant Friday for the seizure of the Iranian oil supertanker Grace 1, one day after a Gibraltar judge allowed the release of the detained vessel.

The warrant says the vessel, all the oil aboard and $995,000 are subject to forfeiture based on violations of the International Emergency Economic Powers Act (IEEPA), and bank fraud, money laundering, and terrorism forfeiture statutes.

The ship's seizure on July 4, with the help of British Royal Marines, triggered a sharp deterioration in relations between Tehran and London and the tit-for-tat detention by Iran of the British-flagged tanker Stena Impero.

Gibraltar's Supreme Court ordered the tanker released on Thursday after the British overseas territory said it had received assurances from Iran that the Grace 1 would not head to any country subject to European Union sanctions.

The vessel had been detained on suspicion that its cargo was destined for the Banyas oil refinery in Syria in breach of an EU embargo.

But Iran denied it had provided any assurances to secure the ship's release, saying Gibraltar was only seeking to "save face".

"Iran has given no assurances over the Grace 1 not going to Syria to secure its release," the state broadcaster's youth website quoted foreign ministry spokesman Abbas Mousavi as saying Friday.

"The tanker's destination was not Syria... and even if it was, it did not concern anyone else."

But the Gibraltar government insisted that Tehran had given a written commitment.

"The written position... confirms that the Islamic Republic of Iran has provided the commitment referred to... The facts speak louder than the self-serving political statements we are hearing today," it said in a statement from its spokesman.

It added that "the evidence located aboard the Grace 1... demonstrates that the vessel was going to Syria".

Hours before the court's ruling, the United States launched a last-minute legal move demanding that the Gibraltar authorities extend the vessel's detention.

On Thursday, Washington threatened a visa ban on the crew of the tanker.

Iranian Foreign Minister Mohammad Javad Zarif tweeted that the US attempt at "piracy" had failed, saying it showed Washington's "contempt for the law".

Tehran and Washington have been at loggerheads since US President Donald Trump withdrew last year from a landmark 2015 nuclear deal between major powers and Iran, reimposing crippling unilateral sanctions.

Following the Grace 1's release, Britain renewed its demand that Iran release the British-flagged tanker it seized in the Strait of Hormuz on July 19.

Tehran claimed that Stena Impero was in violation of "international maritime rules", but the move was widely seen as retaliation for the detention of the Grace 1.