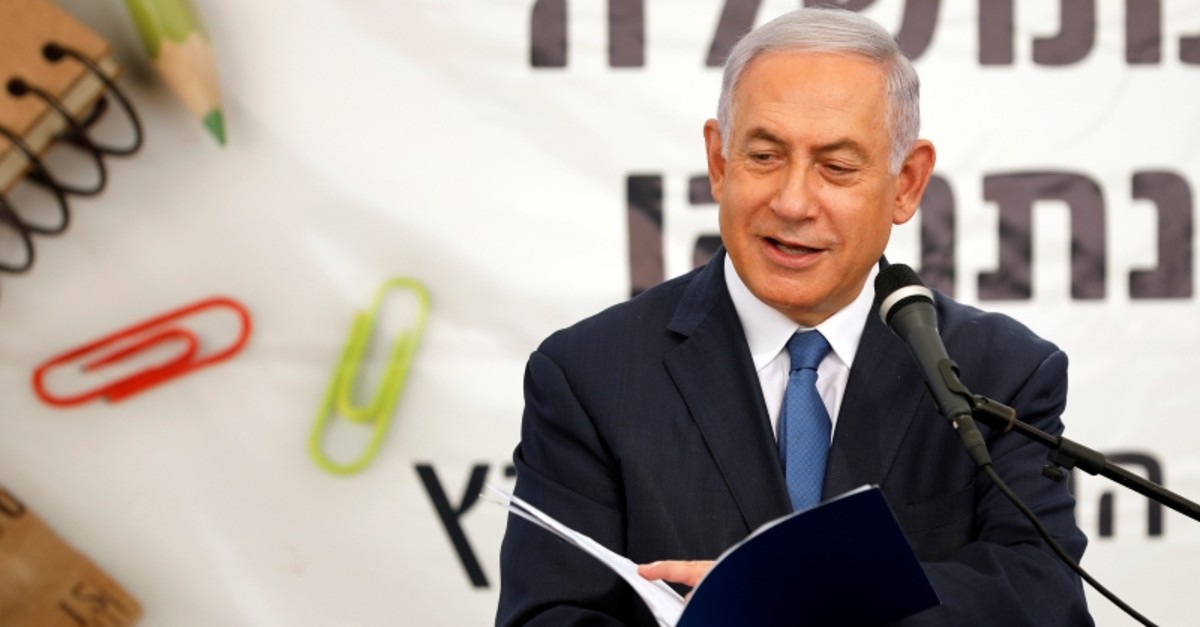 Israeli Prime Minister Benjamin Netanyahu speaks during a ceremony opening the school year in the Jewish settlement of Elkana in the Israeli-occupied West Bank, Sept. 1, 2019. (Reuters Photo)
by Compiled from Wire Services Sep 01, 2019 10:33 am

Israeli Prime Minister Benjamin Netanyahu said on Sunday he intends to annex Israeli settlements in the occupied West Bank, but again gave no timeframe in repeating an election promise he made five months ago.

"With God's help we will extend Jewish sovereignty to all the settlements as part of the Land of Israel, as part of the State of Israel," Netanyahu said in a speech in the West Bank settlement of Elkana, where he attended a ceremony opening the school year.

Such a move would be a sharp departure from long-standing Israeli government policy. Netanyahu made a similar pledge to begin annexing part of the Israeli-occupied West Bank on the eve of April elections this year but did not act on it.

With just over two weeks to go to repeat elections, Netanyahu looks to be seeking to shore up his right-wing base again.

Annexing settlements on a large scale in the West Bank could prove to be a death knell for the two-state solution, long the focus of international efforts to resolve the Israeli-Palestinian conflict.

Palestinians have long argued that Israeli settlements could deny them a viable and contiguous state. Roughly 650,000 Jewish settlers currently live on more than 100 settlements in the Israeli-occupied West Bank and east Jerusalem. The international community regards all Israeli settlements in occupied Palestinian territories to be illegal and a major obstacle to peace in the Middle East. The area, captured by Israel in 1967, is not sovereign Israeli territory, and Palestinians are not Israeli citizens and do not have the right to vote.