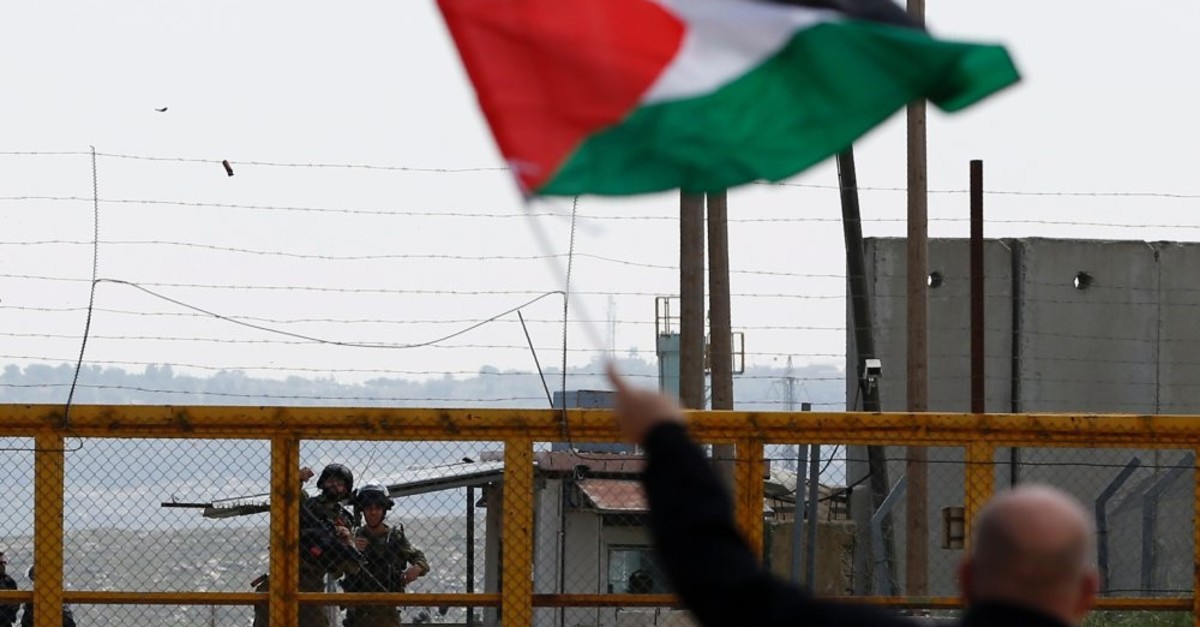 A Palestinian protester waves his national flag in front of Israeli security forces outside the compound of the Israeli-run Ofer prison near Betunia in the Israeli occupied West Bank, March 30, 2016.
by Daily Sabah with AA Sep 03, 2019 12:02 am

Israel's perpetual violations of Palestinians' basic rights in its prisons, including torture, repression and assaults are under the spotlight with two sick Palestinians detainees' lives is in danger

The lives of two sick Palestinian detainees in Israeli prisons are in danger, the umbrella Palestine Liberation Organization (PLO) warned yesterday, underscoring the ongoing suffering by Palestinians subjected to torture and the lack of medical care.

Sami Abu Diak, 35, from Silat al-Dahr village in the northern West Bank, suffers from bowel cancer and is in a wheelchair. Bassam al-Sayah suffers from bone cancer, acute leukemia and heart problems. "The lives of the two detainees are in real danger and they could die at any moment," Hassan Abed Rabbo, spokesman for the PLO's Commission for Detainees and ex-Detainees, told Anadolu Agency (AA). He said Israeli authorities have refused to release the two men despite their critical health condition. The spokesman went on to accuse the Israeli authorities of "slowly killing the two prisoners," calling on human rights groups to urgently intervene to free them.

Israeli occupation forces have arrested around 2,800 Palestinians in the occupied territories so far this year, with the total number of detainees in prisons amounting to 5,500, including minors and women.

Israeli treatment of Palestinian children in military detention has become a major area of concern for the international community.

According to a report released by the Al-Mezan Center for Human Rights earlier this month, hundreds of Palestinian children have been subjected to Israeli violence since the Great March of Return protests started last year when hundreds of thousands of Palestinian demonstrators converged on the buffer zone separating Gaza from Israel. During the same period, 17 children were detained by Israeli forces during protests. Israel has responded to the rallies, still held every Friday, with deadly force, killing more than 220 Palestinians and injuring thousands more. According to a report released last July by the Palestinian Prisoners Center for Studies, the number of children arrested increased 30% when compared to the same period in 2017 when 380 children were arrested by Israeli forces.