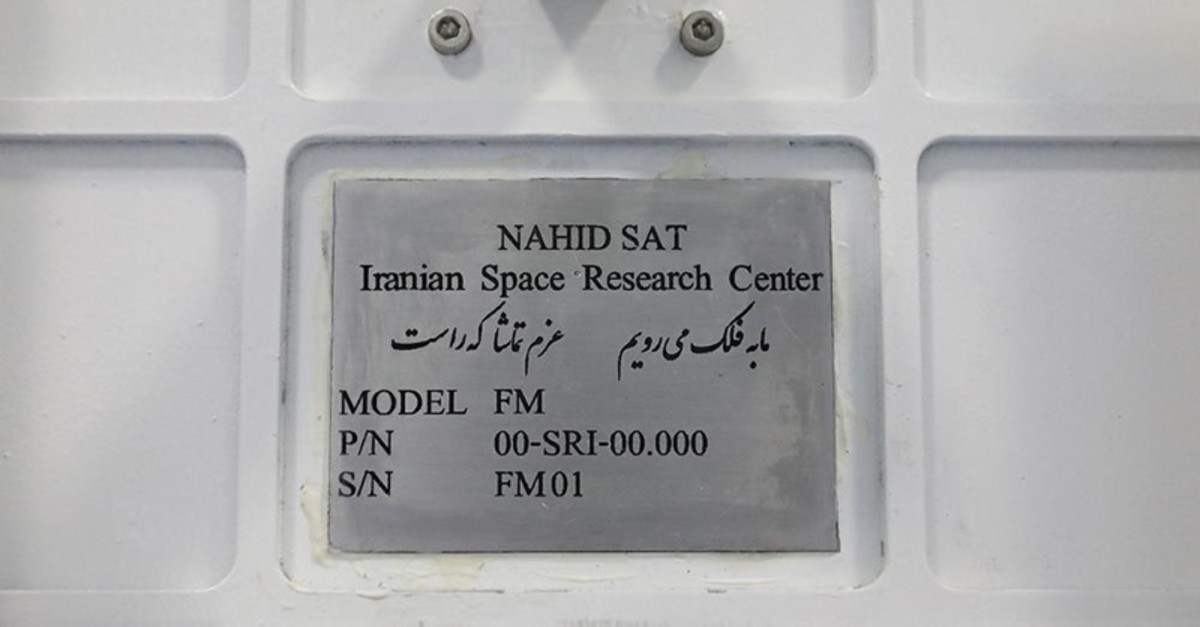 A handout photo made available by Iran's Information and Communication Ministry office on August 31, 2019 shows a view of the plaque on the Nahid-1 domestically-built satellite at the space research centre in Tehran. (AFP Photo)
by Associated Press Sep 03, 2019 11:20 pm
The Trump administration imposed sanctions Tuesday on Iran's space agency for the first time, accusing it of developing ballistic missiles under the cover of a civilian program to launch satellites into orbit.

The sanctions announced by the State and Treasury departments targeting the agency and two of its affiliates follow the explosion Thursday of a rocket at Iran's Imam Khomeini Space Center in what an Iranian official said was a technical malfunction during a test. Following the explosion, President Donald Trump tweeted a surveillance image depicting the apparent aftermath of the incident and declared that the U.S. had nothing to do with what transpired at the launch site.

With the latest sanctions, the Trump administration can subject foreign companies and governments, including international space cooperation organizations, to penalties if they have any involvement with the Iranian space agency. They would also freeze any of the agency's assets in U.S. jurisdictions, though there aren't likely to be any given the state of relations between the two nations.

Secretary of State Mike Pompeo said the "urgency of the threat" was underscored by Iran's recent attempt to launch a space vehicle. "The United States will not allow Iran to use its space launch program as cover to advance its ballistic missile programs," he said in a statement announcing the sanctions.

Officials said the move was not directly related to last week's explosion but that the surveillance image provided evidence of the U.S. assertion that the Iranian space program is used to develop missiles, including ones capable of carrying nuclear warheads or other weapons of mass destruction over long distances.

The sanctions are part of the Trump administration's escalating campaign of economic and diplomatic measures against Iran since unilaterally withdrawing last year from an international accord that was intended to curb the Iranian nuclear program.

Iran insists it is developing rockets to launch satellites into space, which it has done twice since 2013. The explosion marked the third failure involving a rocket at the Iranian center, which has raised suspicions of sabotage in Iran's space program.

Commercially available satellite images by Planet Labs Inc. and Maxar Technologies showed a black plume of smoke rising above a launch pad Thursday, with what appeared to be the charred remains of a rocket and its launch stand. In previous days, satellite images had shown officials there had repainted the launch pad blue.

The blast followed failed launches of the Payam and Doosti satellites in January and February. A separate fire at the Imam Khomeini Space Center in February also killed three researchers, authorities said at the time.

Iran is preparing to launch the Nahid-1, a communication satellite, into space.