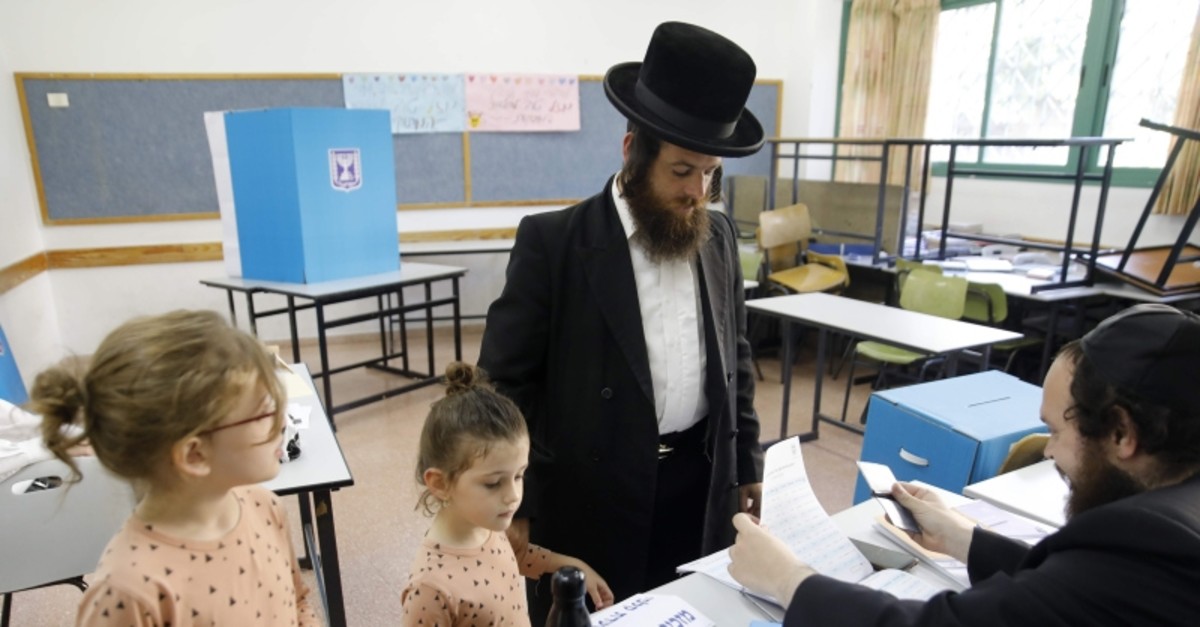 Children accompany an ultra-Orthodox Jewish man to a voting station in the city of Bnei Brak during the Israeli parliamentary election on Sept. 17, 2019 (AFP Photo)
by Associated Press
Sep 17, 2019 10:27 am

Israelis began voting Tuesday in an unprecedented repeat election that will decide whether longtime Prime Minister Benjamin Netanyahu stays in power despite a looming indictment on corruption charges.

Netanyahu, the longest serving leader in Israeli history, is seeking a fourth consecutive term in office, and fifth overall. But he faces a stiff challenge from retired military chief Benny Gantz, whose centrist Blue and White party is running even with Netanyahu's Likud.

Both parties could struggle to form a majority coalition with smaller allies, though, forcing them into a potential unity government.

Netanyahu has tried to portray himself as a statesman who is uniquely qualified to lead the country through challenging times. Gantz has tried to paint Netanyahu as divisive and scandal-plagued, offering himself as a calming influence and an honest alternative.

Tuesday's vote marks their second showdown of the year after drawing even in the previous election in April.

Netanyahu appeared poised to remain in office at the time, with his traditional allies of nationalist and ultra-religious Jewish parties controlling a parliamentary majority.

But Avigdor Lieberman, his mercurial ally-turned-rival, refused to join the new coalition, citing excessive influence it granted the ultra-Orthodox Jewish parties. Without a parliamentary majority, Netanyahu dissolved parliament and called a new election.

Opinion polls have forecast similar results this time around, potentially putting Lieberman in the role of kingmaker.

The performance by the Soviet-born politician's Yisrael Beitenu party is just one of the factors that could determine Netanyahu's future. Several small parties are fighting to squeak past the minimum 3.25% threshold for entering parliament. The performances of these parties could make or break Netanyahu's ability to form a coalition. Heavier turnout by Arab voters, many of whom stayed home in April, could hurt Netanyahu.

The longtime Israeli leader is desperate to secure a narrow 61-seat majority in parliament with his hard-line religious and nationalist allies who are expected to approve legislation that would grant Netanyahu immunity from prosecution.

With his career on the line, Netanyahu has campaigned furiously and taken a late hard turn to the right in hopes of rallying his nationalist base.

He's staged a flurry of media appearances to beseech supporters to vote in large numbers to stave off the prospect of a left-wing government he says will endanger the country's security. He also has accused his opponents of conspiring with Arab politicians to "steal" the election, a message that has drawn accusations of racism and incitement.

Aron Shaviv, who managed Netanyahu's 2015 re-election campaign, said Netanyahu believed "there's no such thing as bad coverage." But he thought his former boss may be making a mistake by appealing so heavily to hard-liners and giving up on moderate voters.

"He's turned people off, playing the right-left polarization as far as he possibly can," he said.

A centerpiece of his eleventh-hour agenda has been the pledge to extend Israeli sovereignty over parts of the West Bank and to annex all the Jewish settlements there, something Netanyahu has refrained from doing during his decade-plus in power because of the far-reaching diplomatic repercussions.

His proposal sparked a cascade of international condemnation, including from Europe and Saudi Arabia, an influential Arab country that has quiet, unofficial ties with Israel. The U.S., however, had a muted reaction, suggesting Netanyahu coordinated his plan with the Americans ahead of time.

Netanyahu has also been flaunting his close ties to President Donald Trump, and the prospect of a defense pact between their countries shortly after the election, as part of his frantic push get out the vote and dictate the election's agenda on his terms.

He also claimed to have located a previously unknown Iranian nuclear weapons facility and said another war against Gaza militants is probably inevitable. In some of his TV interviews, the typically reserved Netanyahu has raised his voice and gestured wildly as he warned of his imminent demise.

"I think you're observing Israel's most seasoned and competent politician who knows exactly how to fire up his base and is now using all his tools at his disposal in order to ensure victory," he said.

Polling stations opened at 7 a.m. Tuesday with exit polls expected at the end of the voting day at 10 p.m. Official results are projected to come in overnight.

That's when the real jockeying may get under way, with attention shifting to President Reuven Rivlin who is responsible for choosing a candidate for prime minister. He is supposed to select the leader who he believes has the best chance of putting together a stable coalition. The honor usually goes to the head of the largest party, but not necessarily. Just as important is the number of lawmakers outside his own party who recommend him to the president.

Rivlin's selection will then have up to six weeks to form a coalition.