Netanyahu short of majority, neck-and-neck with Gantz in Israel elections 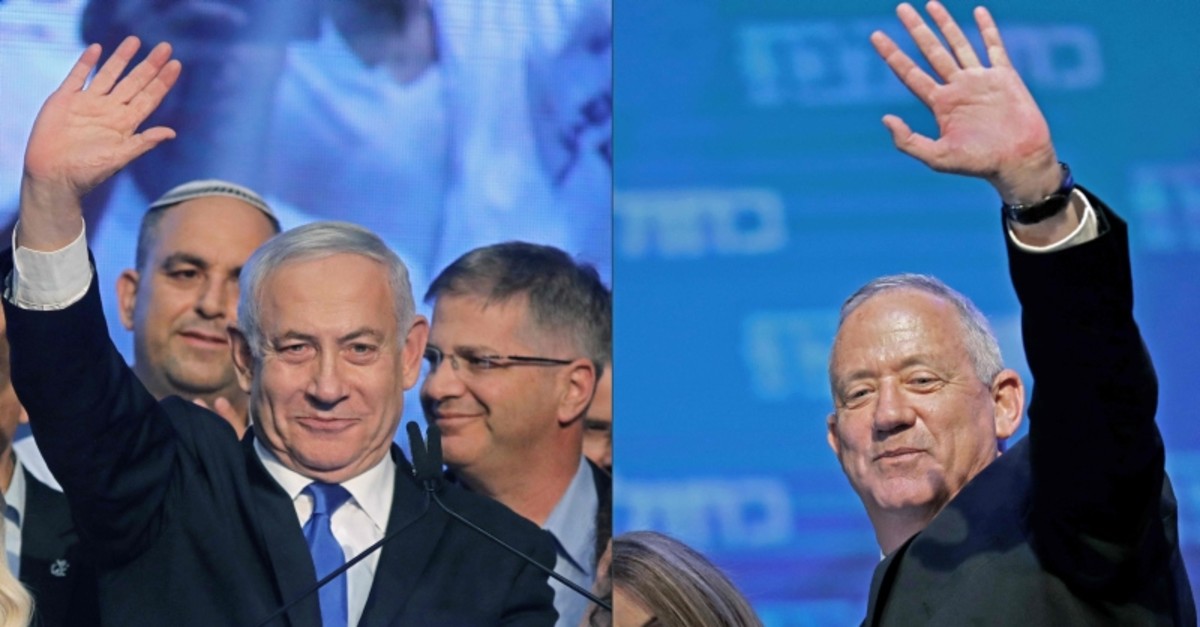 Israel's two main political parties were deadlocked Wednesday after an unprecedented repeat election, with Prime Minister Benjamin Netanyahu facing an uphill battle to hold on to his job.

The election's seeming political kingmaker, Avigdor Lieberman, said he'll insist upon a secular unity government between Netanyahu's Likud and Benny Gantz's Blue and White parties, who based on partial results are currently tied at 32 seats each out of the 120 in parliament.

Without Lieberman's endorsement, both parties appear to have fallen well short of securing a parliamentary majority with their prospective ideological allies.

With results still pouring in, Lieberman insisted the overall picture was unlikely to change. He also demanded a secular "liberal" government shorn of the religious and ultra-Orthodox allies the prime minister has long relied upon.

"The conclusion is clear, everything we said throughout the campaign is coming true," he said outside his home in the West Bank settlement of Nokdim. "There is one and only option: a national unity government that is broad and liberal and we will not join any other option."

That could spell serious trouble for the continuation of Netanyahu's lengthy rule.

Gantz, a former military chief, has ruled out sitting with a Netanyahu-led Likud at a time when the prime minister is expected to be indicted on corruption charges in the coming weeks. It raised the specter of an alternate Likud candidate rising to challenge Netanyahu, though most of its senior officials have thus far pledged to stand solidly behind their leader.

Netanyahu, the longest-serving leader is Israeli history, had desperately sought an outright majority with his hard-line and ultra-Orthodox allies in hopes of passing legislation to give him immunity from his expected indictment.

Israel's attorney general has recommended charging Netanyahu with bribery, fraud and breach of trust in three scandals, pending a long-awaited hearing scheduled in the coming weeks. A formal indictment would increase the pressure on Netanyahu to step aside if he does not have immunity.

The partial results released Wednesday by the Central Election Commission were based on a tally of 56% of the potential electorate. Overall turnout was 69.4%.

According to the partial results, Likud with its natural allies of religious and ultra-nationalist parties mustered just 56 seats — or five short of the needed majority.

Gantz's Blue and White and its center-left allies garnered 55 seats, placing Lieberman's Yisrael Beiteinu and its nine seats in the middle as the deciding factor.

The only precedent for a unity government in Israel came after the 1984 election and saw a rotating premiership between the heads of the two largest parties.

The joint list of Arab parties, who have never sat in an Israeli government, also finished strong, with results indicating they had earned 12 seats to become the third-largest party in parliament. Should a unity government be formed, its leader Ayman Odeh would become the country's next opposition leader, an official state position that would grant him an audience with visiting dignitaries, a state-funded bodyguard, monthly consultations with the prime minister and a platform to rebut his speeches in parliament.

Addressing his supporters early Wednesday, Netanyahu refused to concede defeat and vowed to form a new government that excludes Arab parties, continuing his campaign rhetoric of questioning the loyalty of the country's Arab minority — a strategy that drew accusations of racism and incitement.

"There neither will be nor can there be a government that relies on anti-Zionist Arab parties. Parties that reject the very existence of Israel as a Jewish and democratic state. Parties that vaunt and praise bloodthirsty terrorists who murder our soldiers, citizens and children," he said.

In his first comments Wednesday morning outside his home, Gantz said he had already begun working toward forming a "unity government" but urged patience until the final results were announced, likely on Thursday.

Focus will then shift toward Israel's president, Reuven Rivlin, who is tasked with selecting the candidate he believes has the best chance of forming a stable coalition. Rivlin is to consult with all parties in the coming days before making his decision. Lieberman's recommendation will carry a lot of weight regarding who will be tapped as the prime minister-designate.

The candidate would then have up to six weeks to form a coalition. If that fails, Rivlin could give another candidate for prime minister 28 days to form a coalition. And if that doesn't work, new elections would be triggered yet again. Rivlin has said he will do everything possible to avoid such a scenario and Lieberman has ruled it out as well.

Lieberman's primary stated goal is to push out what he sees as the excessive power of the ultra-Orthodox Jewish parties and have wide a coalition that can effectively tackle Israel's most pressing security and economic challenges. But Netanyahu accused his former ally of plotting to oust him from office out of personal spite.

Behind the two is decades of a roller-coaster relationship. Lieberman, once Netanyahu's chief of staff, has held a series of senior Cabinet posts and was often a staunch partner. But he's has also been a rival, critic and thorn in Netanyahu's side.

The Moldovan-born Lieberman started as a top Netanyahu aide in the 1990s before embarking on a political career of his own as a nationalist hard-liner and champion of immigrants like the former Soviet Union like himself. But he resigned last year as defense minister because Netanyahu kept blocking his plans to strike hard against Gaza militants.

Lieberman passed up the chance to return to the post following April's election, refused to join Netanyahu's emerging coalition and forcing the do-over vote. Assuming he sticks to his guns this time as well, Netanyahu could be done as Israel's prime minister.

Lieberman is now "the linchpin," wrote Nahum Barnea, a prominent columnist in the Yediot Ahronot daily.

"I don't think that anyone is prepared to risk a third election, not even for Netanyahu," Barnea added. "Maybe the time has come to say goodbye."

Increasing the prospect of weeks of tense political deal-making, Netanyahu spoke before supporters on Wednesday morning and said he was prepared for negotiations to form a "strong Zionist government." He seemed to hint at openness to forming a national unity government, but did not specifically say so. In his speech to supporters in Tel Aviv, Gantz called for a "broad unity government" but cautioned that he was waiting for final results. "We will act to form a broad unity government that will express the will of the people," the former armed forces chief said. "We will begin negotiations and I will speak with everyone."

During his election campaign, Netanyahu has sought to extend his record-breaking time as prime minister by making a series of ambitious pledges in a bid to whip up support from hard-line religious politicians and appealing to far-right ultra-nationalists.

Netanyahu issued a last-minute pledge to annex "all the settlements" in the West Bank, including an enclave deep in the heart of the largest Palestinian city, if re-elected, which many saw as a play for vital right-wing nationalist votes.

Netanyahu's main rivals have dismissed his talk of annexation as a campaign stunt but have not opposed it on its merits. They have also vowed to be much tougher toward Hamas in the Gaza Strip, accusing Netanyahu of being too soft in the face of Palestinian rocket fire. Gantz has boasted of his role in the 2014 Gaza war, saying he sent parts of Gaza back to the "stone age."

Netanyahu's move has raised the stakes for Palestinians, who reacted with anger. Palestine Liberation Organization (PLO) official Hanan Ashrawi accused Netanyahu of "not only destroying the two-state solution" but also "destroying all chances of peace." Gaza's Hamas rulers also said Netanyahu's annexation plans "neither change reality nor stop the resistance of our people against the Israeli occupation and schemes."