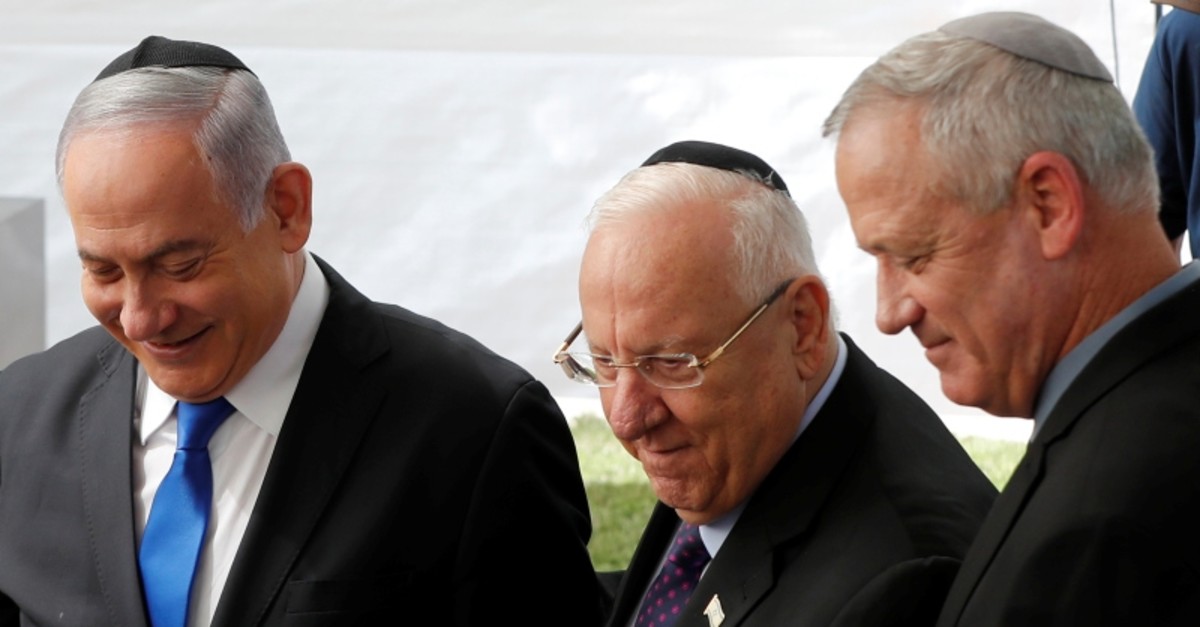 Israeli PM Benjamin Netanyahu (L), President Reuven Rivlin and Benny Gantz, leader of Blue and White party, stand next to each other at a memorial ceremony for late President Shimon Peres, at Mount Herzl in Jerusalem, Sep. 19, 2019. (Reuters Photo)
by Compiled from Wire Services Sep 19, 2019 2:32 pm

Both Israeli Prime Minister Benjamin Netanyahu and his main opponent Benny Gantz called for a unity government on Thursday, after a second election this year produced no decisive winner, but the main sticking point seems who will lead that government.

Netanyahu had previously insisted he would lead a coalition between right-wing and religious parties, but the election results so far have indicated that neither he nor Gantz of the centrist Blue and White Party (Kahol Lavan) will be able to form a government.

A unity government would include the two largest parties, Netanyahu's Likud and Gantz's Blue and White, instead of either one of them forming a coalition with some of the smaller parties.

"During the elections, I called for the establishment of a right-wing government. But unfortunately the election results show that this is not possible," Netanyahu said in a statement.

"The people did not decide between the two blocs," he said, adding that there "is no choice" but to form a unity government. He called on Gantz to meet him later on Thursday.

"We will not enter a coalition led by Netanyahu," senior Blue and White leader Moshe Yaalon told reporters at an event attended by Gantz.

It is unclear however if Gantz, who has in the past spoken of not wanting to serve in a government with an indicted prime minister, would accept such a government with Netanyahu, the long-serving Israeli leader, remaining as premier. The fiercely loyal Likud is unlikely to oust Netanyahu.

While weeks of negotiations to form a coalition government lay ahead, conditions set by the parties could hobble the task within the allotted time, prompting a never-before held third election.

"Everyone will need to get off their high horse to prevent elections for the third time," Likud lawmaker David Bitan told Israeli Army Radio. "Blue and White's desire for a unity government under their terms will not work."

Netanyahu said that he was against going to a third election, which was seen as the only alternative to a unity government.

In his statement, however, Netanyahu still asserted that the day before, he and his right-wing partners agreed "that we are going as one bloc with one shared representative for negotiations."

Likud and the other right-wing and religious parties backing Netanyahu have agreed that they will not enter a coalition without each other, a Likud spokeswoman said.

The Blue and White party has repeatedly said that it will not sit in a coalition led by Netanyahu, who faces indictments over corruption charges, subject to a hearing which is set to be held in two weeks time.

The party has said it would sit with Likud in any other circumstance, but Likud members have publicly said that there is no possibility of replacing Netanyahu as their leader.

Blue and White has also called for a secular unity government, while the parties Netanyahu has insisted will join him include the ultra-Orthodox ones.

Naftali Bennet of the far-right Yamina party wrote on Twitter that Gantz should "immediately answer Prime Minister Netanyahu's call to meet, and stop with this silly boycott."

President Reuven Rivlin congratulated Netanyahu on his call for a unity government.

Speaking at a memorial ceremony for the late president Shimon Peres, Rivlin said: "I will do everything I can to prevent another general election."

Both Netanyahu and Gantz were also at the ceremony.

"Our current situation, which has gone on for a long time, with a transition government, grievously limits the ability of the government to act and to serve the citizens of Israel, and our ability to face the political, security and economic challenges we face," Rivlin added.

Also speaking the ceremony was Netanyahu who hinted at a possible rotating premiership deal with Gantz. Netanyahu noted that the late left-wing statesman had forged a coalition with conservative Yitzhak Shamir in which they rotated top office between 1984 and 1988.

"When there was no clear victory in Knesset (parliamentary) elections, Shimon opted for national unity. He and Yitzhak Shamir agreed to cooperate in order to navigate Israel to a safe shore," Netanyahu said in the speech.

"In this election, too, there is no clear win. And I call on you, Benny ... Let us work together to again bring the State of Israel to safe shores."

Israeli daily Haaretz reported Thursday morning that with 97 percent of the votes counted, Blue and White had a slight lead with 33 out of 120 Knesset seats, and Likud was behind with 31 seats. The report also said that the center-left bloc had 57 seats and the right-wing and religious bloc had 55.

Avigdor Lieberman's right-wing secular Yisrael Beiteinu party had the remaining eight seats. He is not included in either bloc as it is unclear whom he will recommend to the president for premier.

Israel's newly reunified Arab parties, running together under the Joint List alliance, have also emerged as an important force, with the reported results showing them with 13 seats -- the third-largest.

That could allow them to block Netanyahu from continuing on as prime minister if they decided to break with precedent and endorse Gantz.

Israel's Arab parties have traditionally not endorsed anyone for prime minister.

After complete, official results are in, Israeli President Reuven Rivlin will hold consultations with all parties voted into parliament and then choose someone to try to form a government.

It will be the second time he has done so since April, after Netanyahu failed to form a coalition.

Lieberman at the time refused to join his government over disagreements with the ultra-Orthodox parties.

Israelis endured a caustic campaign that saw a combative Netanyahu fighting for his political survival amid the recommendation by Israel's attorney general to indict him on charges of bribery, breach of trust and fraud pending a hearing in early October.

Netanyahu had sought an outright majority with his allies in hopes of passing legislation to give him immunity from the expected indictment, which would otherwise increase the pressure on Netanyahu to step aside.

The vote was largely seen as a referendum on Netanyahu, who this summer surpassed Israel's founding prime minister to become the country's longest-serving leader. During the campaign Netanyahu cast himself as a seasoned statesman who was the only candidate able to steer Israel through a sea of challenges.

Gantz, a former army chief, tried to paint Netanyahu as divisive and scandal-plagued, offering himself as a calming influence and honest alternative.

Despite the scorched earth campaign that saw Netanyahu thrash institutions like the media, the police and the electoral committee — and which was tinged with anti-Arab rhetoric — the longtime leader failed to secure the resounding victory he needed to guarantee his political survival and perhaps save himself from a formal indictment.