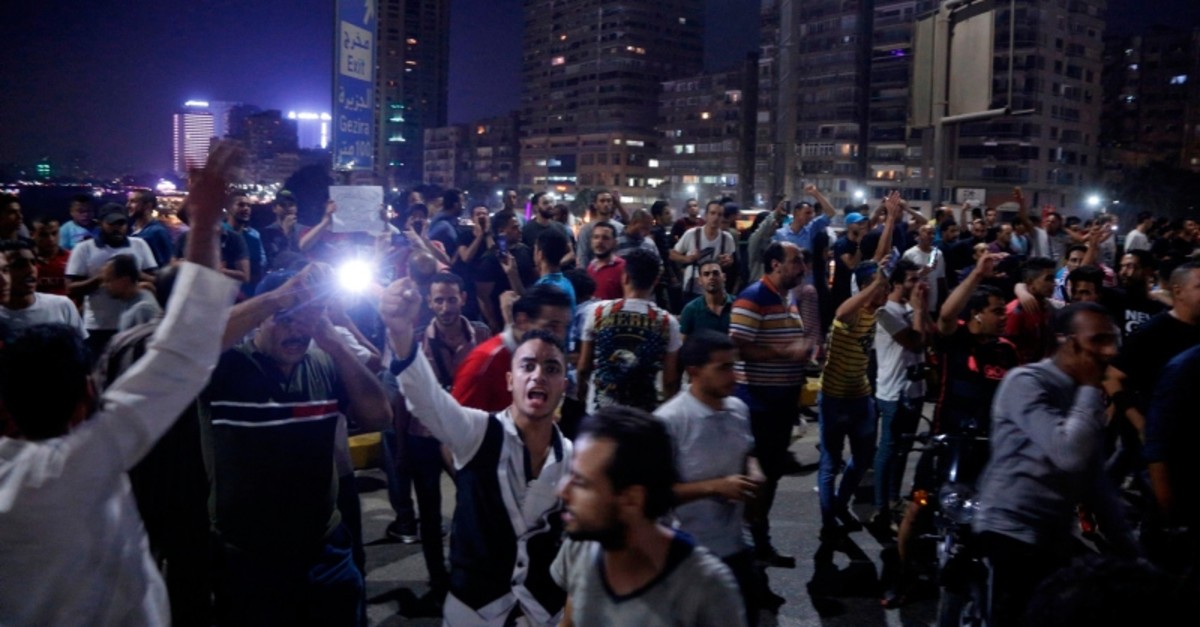 Egyptian protesters shout slogans as they take part in a protest calling for the removal of President Abdel Fattah al-Sisi in Cairo's downtown on Sept. 20, 2019 (AFP Photo)
by Daily Sabah with Agencies Sep 24, 2019 5:40 pm

In the wake of growing calls for mass protests on Friday against President Abdel-Fattah el-Sissi who came to power through a coup d'etat, Egyptian authorities have broadened their crackdown on demonstrators, dissidents and activists in the country. While Egyptian security forces rounded up hundreds of people after the weekend protests, several media websites, including BBC Arabic, were censored for reporting news about the protests. Furthermore, the regime is reportedly preparing for a huge protest with the participation of over 1 million people over the weekend.

After the small-scale demonstrations erupted at the weekend, businessman Muhammed Ali implored Egyptians to join a "million-man march" on Friday to unseat el-Sissi.

"This is a people's revolution... We have to link up together as one... and organize going down to the major squares," he said in a Facebook appeal.

His 30-minute-long videos viewed and shared by millions mainly on Facebook and YouTube have spurred fierce debate online about the military's vast economic interests.

More than 400 people have been arrested in Cairo and elsewhere across the country, while at least 220 people were questioned by prosecutors over claims that they took part in the activities of an outlawed group, disseminating false news, misuse of social media platforms and taking part in unlicensed protests. Under Egyptian law, the accusations could land them in jail for years.

In addition, a file was opened to revoke the nationality of an Egyptian businessman, Mohammad Ali, who played a key role in igniting the protests through his videos on YouTube. Ali claimed in his first video on Sept. 2 that Egypt's military under el-Sissi's direction has misspent millions of Egyptian pounds in public funds. He also alleges the military owes him hundreds of millions of pounds for projects his company Amlaak Group was assigned to build, including palatial residences for el-Sissi. Ali, who says he fled to Spain a year ago, has not provided any hard evidence to back up his claims. El-Sissi has rejected the allegations as "lies and slander."

The protests marked a startling eruption of popular dissent, which has been almost completely silenced in recent years by draconian measures imposed under el-Sissi. Egypt has long been criticized for its violations of human rights, silencing dissidents and putting thousands of people in prison. The latest constitutional referendum last month paved the way for el-Sissi to remain in power until 2030. Despite the country's struggle for economic improvement, human rights violations have become increasingly alarming. The death of Mohammed Morsi, the country's first democratically elected president, while in custody has caused massive backlash from the international community as it was widely speculated that his death was the result of mistreatment rather than natural causes. The Muslim Brotherhood, which the el-Sissi government outlawed and was designated a terrorist group in 2013, voiced its support for the protesters in a statement and urged people to take to the streets to "end the military rule."

In 2011, when the Arab Spring swept across the Middle East and North Africa region, Egypt was a central country in terms of protests against autocratic ex-leader Hosni Mubarak, who had ruled the country for three decades. The world-renowned Tahrir Square was the place where millions of people gathered from different sides of the political and economic spectrum to challenge Mubarak's rule. As one of the few successes of the Arab Spring, Egyptians managed to switch to democracy. Elections were held the next year, resulting in the democratic victory of former President Morsi. However, Egypt once again suffered as the current president, el-Sissi, then chief of the army, orchestrated a bloody coup against the country's first freely elected president. Thousands of people rejected the army's move and demonstrated in the streets. Thousands were killed in Rabaa Square in one night on the grounds that the army had to disperse the protesters to preserve order. Since then, a harsh crackdown on dissidents, not only the Muslim Brotherhood but anyone who opposed el-Sissi, has commenced.