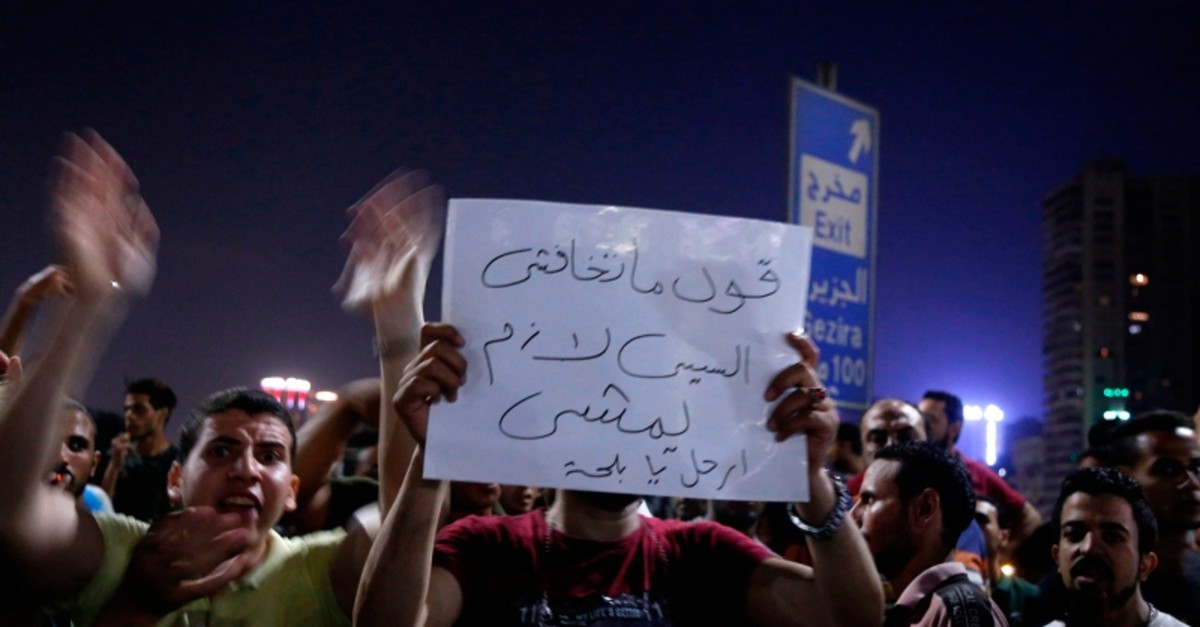 Egyptian protesters shout slogans as they take part in a protest calling for the removal of President Abdel Fattah al-Sisi in Cairo's downtown on September 20, 2019 (AFP Photo)
by Sep 25, 2019 4:27 pm

Defying a ban on protesting without a permit, hundreds took to the streets in Cairo and other cities on Friday in response to calls for protests against alleged government corruption. The protests continued in the Red Sea city of Suez on Saturday.

Gamal Eid, head of the Arab Network for Human Rights Information, said his own group and two others -- the Egyptian Center for Economic and Social Rights and the Egyptian Commission for Rights and Freedoms -- had jointly documented more than 1,100 arrests.

The interior ministry could not immediately be reached for comment.

El-Sissi came to power after leading the overthrow of the Muslim Brotherhood's Mohamed Morsi, Egypt's first democratically elected leader, following mass protests against him in 2013.

Protests in Egypt have been rare under el-Sissi, who has overseen a broad crackdown on dissent that rights activists say is the most severe in the country's modern history.

El-Sissi's supporters say tough measures were necessary to stabilize Egypt after the turmoil that followed the 2011 uprising that toppled former strongman Hosni Mubarak.

The protests have rattled financial markets, with the Egyptian stock market's main index falling nearly 11% in trading between Sunday and Tuesday.

On Wednesday morning, the Arabic hashtag "El-Sissi is not my president" was trending with more than 40,000 tweets. Several Twitter hashtags have been used to rally support for the protests, while pro-El-Sissi hashtags have also appeared.

The protests took place after a former civilian contractor for the military, Mohamed Ali, posted a series of videos accusing El-Sissi and the military of corruption. El-Sissi dismissed the allegations as "lies and slander."

Ali has called for mass protests on Friday.