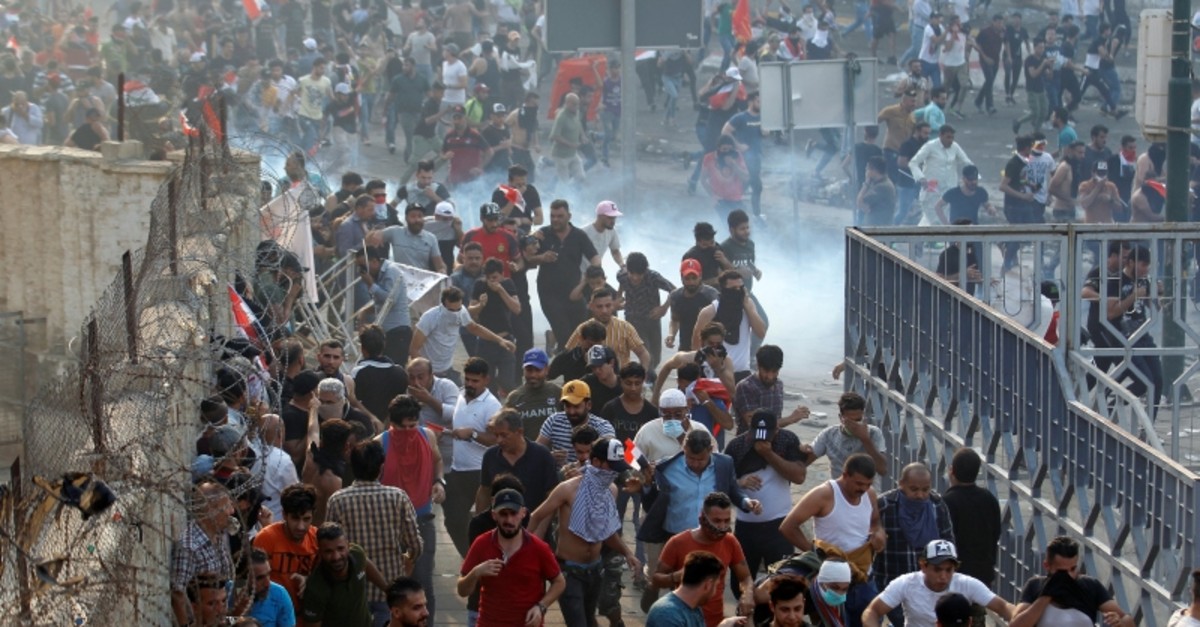 Demonstrators disperse as Iraqi Security forces use tear gas during a protest against government corruption amid dissatisfaction at lack of jobs and services at Tahrir square in Baghdad, Iraq October 1, 2019. (REUTERS Photo)
by Daily Sabah with Agencies Oct 01, 2019 7:01 pm

The Iraqi government on Wednesday launched an emergency investigation into protests in Baghdad that left three dead and at more than 700 injured.

In a written statement, Iraqi Prime Minister Adel Abdul-Mahdi called for peace, telling citizens that the government had established commissions to work to meet all of the demands of the protesters.

On Tuesday, four people were killed and scores more injured, most of them from tear gas inhalation and some by rubber bullets, in Baghdad in the first major protest against Iraq's fragile, less than year-old government.

More than 700 other people were injured in the demonstrations that took place on Tuesday, a source told Anadolu Agency on condition of anonymity because he was not authorized to speak to the media.

The injured include 40 security personnel, said a statement issued by the government.

Iraq's Independent High Commission for Human Rights earlier put the death toll at two, saying that around 260 people were injured in the protests.

President Barham Salih said on Twitter that the right of peaceful demonstration is guaranteed by the constitution and that Iraqi youth are expecting improvement and employment.

"It is our duty to fulfill these legitimate demands," he said.

Demonstrations erupted in Baghdad against the government led by Prime Minister Adil Abdul-Mahdi following calls by activists citing government's failure to improve the living standards of citizens and to implement its programs, according to eyewitnesses.

Protests took place also in a number of other provinces including Basra, Maysan, Dhi Qar and Al Diwaniyah.

More than 1,000 protesters had descended on the main Tahrir Square with Iraqi flags draped over their shoulders or wrapped around their foreheads.

"Those thieves robbed us!" they cried out in condemnation of the political class in Iraq, considered the 12th most corrupt country in the world by Transparency International.

Others were on the streets to protest at the lack of public services, including rampant power cuts, water shortages and unemployment, particularly among youth.

And some carried portraits of Staff Lieutenant General Abdulwahab al-Saadi, who was this week removed from his post in Iraq's Counter-Terrorism Service in a shock move.

Riot police cleared the square a first time but the demonstrators regrouped, making their way to a bridge into the high-security Green Zone where government offices and foreign embassies are present.

Security forces then fired a steady volley of live shots which continued even after the crowds had dispersed into adjacent neighborhoods.

A security source inside the Green Zone told AFP that reinforcements had been requested to prevent the protesters from entering the area.

The gathering was the biggest demonstration against Prime Minister Abdel-Mahdi since he came to power in late October 2018.

The protests over poor services echoed those that engulfed the southern city of Basra last summer.

Despite simmering frustration with the premier, streets in Baghdad had remained relatively quiet, before a confluence of factors apparently reignited public anger.

Graduates have slammed the government for failing to hire them in a country where a vast majority of the labor force is employed by a bloated public infrastructure.

According to the World Bank, youth unemployment in Iraq is running at around 25 percent, double the national average.

Since 2004, a year after the U.S.-led invasion that ousted dictator Saddam Hussein, almost $450 billion of public funds has vanished into the pockets of shady politicians and businessmen, according to official figures.