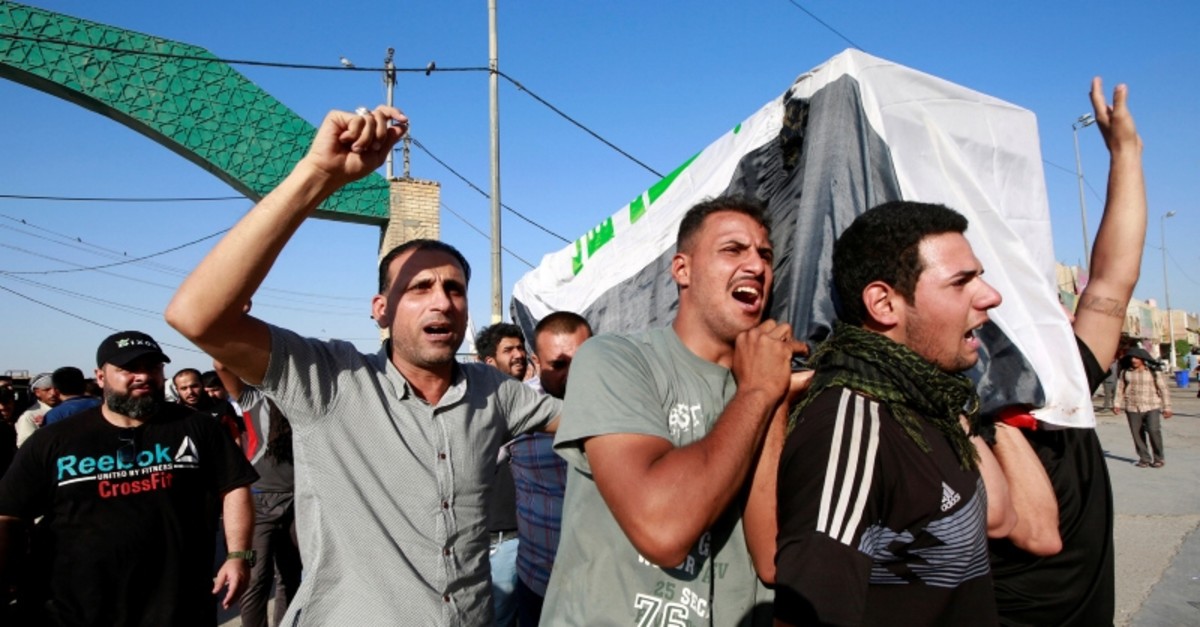 Iraqi men carry the coffin of a demonstrator, who was killed during anti-government protests, at a funeral in Najaf, Iraq October 5, 2019 (Reuters Photo)
by Anadolu Agency Oct 05, 2019 7:33 pm

The Iraqi government has been engaged in talks with representatives of protesters on Saturday in an effort to end a wave of demonstrations that killed scores in the country.

The follow-up unit in Prime Minister Adel Abdul-Mahdi's office said "it is contacting with influential parties in the popular protests in six provinces", the official Iraqi News Agency reported.

"There is an agreement on fulfilling the legitimate demands of the protesters," the unit said.

Saturday's talks were the first between the Iraqi government and protesters since demonstrations broke out on Tuesday in Baghdad and the country's southern provinces.

At least 100 people have been killed and more than 2,500 others injured in the protests, according to an anonymous official from Iraq's Health Ministry.

On the fifth day of protests, five people were killed and dozens were injured as a result of the intervention of the security forces in demonstrations in capital Baghdad's Palestine Street, according to information received from hospital sources.

Protesters have been demanding Prime Minister Adel Abdul-Mahdi to resign as well as improvements in living conditions and an end to corruption.

"We are looking forward to seeing the Iraqi government taking all measures to calm the situation and initiate a serious and real dialogue to address the causes of the protests," the Cairo-based league said in a statement.

It reiterated support for Iraq "in taking every measure to end the current escalation and restore peace and security to the country".

Discontent has been growing in Iraq in recent years due to rising unemployment rates and rampant corruption. Many in the country have limited access to basic services such as electricity and clean water, and the unemployment level is around 10%.