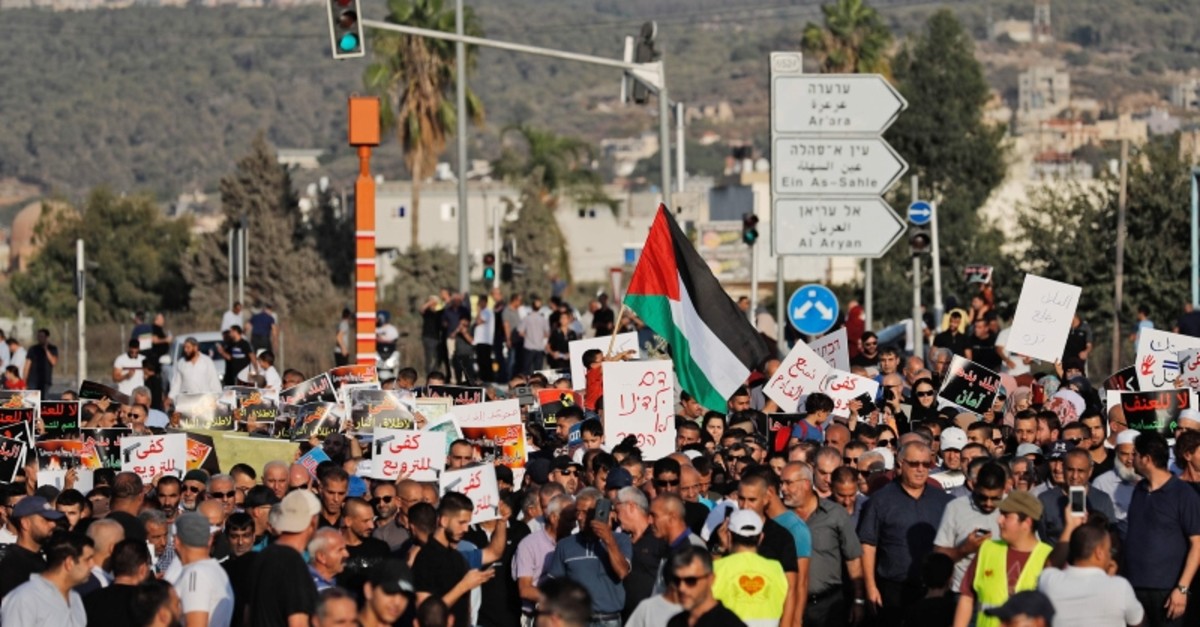 Arab Israeli protesters carry placards and chant slogans as they block a highway near the Arab Israeli city of Ar'Ara, north of Israel during a demonstration against violence, organised crime and recent killings among their communities, on October 13
by Daily Sabah Oct 14, 2019 1:14 am

Defying the status of the Al-Aqsa Mosque, an Israeli minister announced permission will be given to Jews to enter the compound to pray, escalating tensions and violations against Palestinians

Amid increasingly harsh policies against Palestinians and increasing violations at the Al-Aqsa Mosque compound by the Israeli government, an Israeli minister announced that Jewish settlers will be allowed to freely perform their prayers inside the compound.
“The situation in Jerusalem is heading toward regaining sovereignty and control over the place. We will reach our goal [opening Al-Aqsa for Jews] when more Jews express their desire to visit the Temple Mount [Al-Aqsa Mosque]. Then there will be increasing pressure, following an increasing demand. I hope this happens soon,” Israeli Public Security Minister Gilad Erdan said, as reported by the Middle East Monitor.
“When we reach this stage, we will work and push for changing the historical status quo in Jerusalem in light of respecting the international interests for Israel,” he added.
Israel claims that Jerusalem is its capital despite the fact that the U.N. and many countries recognize the city as occupied; however, Israel has been expanding its control over the city in recent years by making new settlements and forcing the Palestinians to abandon their land.
Moreover, the recent U.S. decision to move its embassy to Jerusalem, which was a clear recognition of the city as the Israeli capital, worsened the Palestinians’ situation, undermining the status quo in the city.
So far, Jewish settlers have forced their way into the Muslim holy site, as Palestinians have faced a harsher stance from the Israeli government. Earlier this year, Israeli authorities barred hundreds of Muslims from entering the mosque, while certain Israeli politicians asked for an extension of the ban.
Tensions escalated after a Muslim scholar was banned from entering the mosque. During the election campaign, Israeli Prime Minister Benjamin Netanyahu’s struggle to survive was a reflection of the increasingly harsh policies against Palestinians and increasing violations at the Al-Aqsa Mosque compound.
Netanyahu spent the final days of his electoral campaign seeking to appeal to right-wing nationalists. The alliance between Netanyahu and the right-wing parties is considered to play a role in the escalation of tensions against Palestinians, as extremist parties make public calls to open Al-Aqsa Mosque for the use of Jewish Israelis as well.
Last Thursday, dozens of Jewish settlers broke into the Al-Aqsa Mosque complex, according to a Jerusalem-based agency. “Around 159 Jewish settlers have entered the compound,” the Religious Endowments Authority, a Jordan-run agency responsible for overseeing the city's Muslim and Christian holy sites, said in a statement, as reported by Anadolu Agency (AA).
A report revealed increasing raids at Al-Aqsa Mosque with more than 2,200 Jewish settlers forcing their way into the compound in July, according to a Palestinian nongovernmental organization (NGO). “Around 2,233 Jewish settlers guarded by Israeli security personnel stormed the compound in July,” the Wadi Hilweh Information Center said in a statement. The NGO said Israeli authorities also banned 14 Palestinians, including two minors and two women, from entering the holy site for different periods of time in July.
The Al-Aqsa Mosque is considered to be the third holiest place by Muslims, after Mecca and Medina. Muslims believe that the first qibla, the direction which Muslims turn to during prayers, was Al-Aqsa until it was designated as Mecca. Moreover, the existence of the Qubbat-us Sahra within the compound makes it more special as it is believed that the Prophet Muhammad started his spiritual journey to the heavens from that place.
Since Israel occupied Jerusalem in 1967 the conflict continues between Palestinians and Israelis, as the latter believe that the holy temple of Solomon is beneath the mosque. There are several rumors claiming that Israelis were digging canals to reach the temple’s ruins.
Last Update: Dec 20, 2019 1:03 am
RELATED TOPICS