Political deadlock in Lebanon after days of unrest 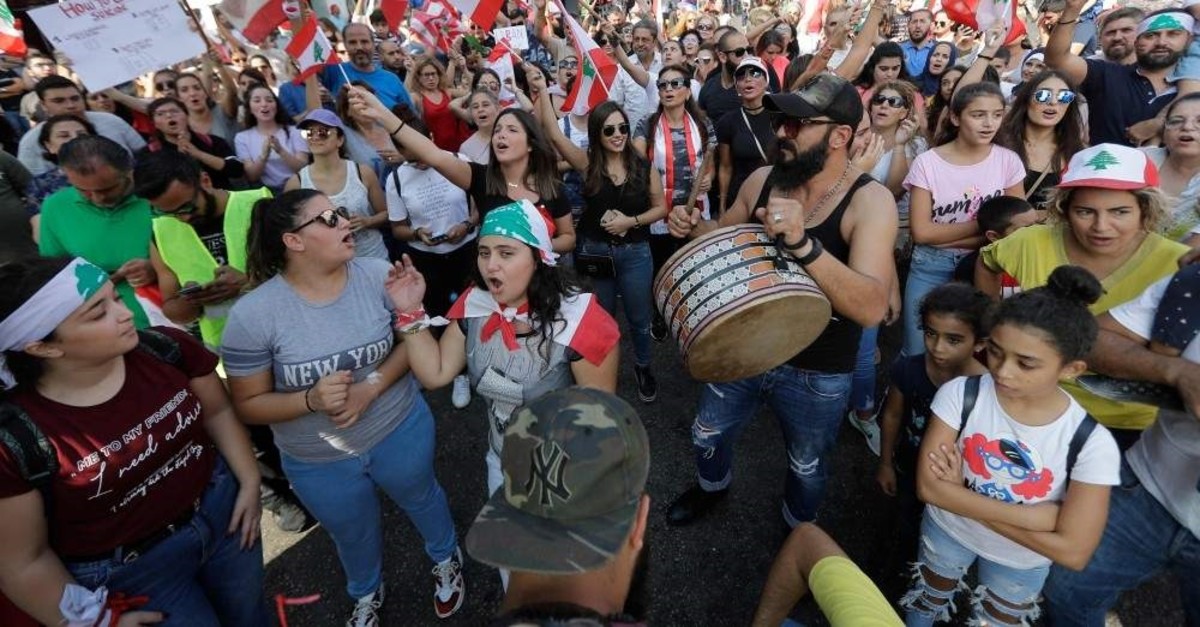 The resignation of a key Christian party rocked Lebanon’s fragile coalition government as the ongoing protests unleashed long-simmering anger at a ruling class that has divvied up power among themselves and amassed wealth for decades but has done little to fix a crumbling economy and dilapidated infrastructure.
Anti-government protests that have swept the country since last Thursday have pulled together all segments of Lebanese society in an unusually unified call for the downfall of political elite that protesters blame for plunging the economy into crisis.
The protests are Lebanon’s largest in five years, spreading beyond Beirut to its main cities and towns. The unrest sparked by a proposed $0.20 tax on calls via messaging apps such as WhatsApp. The government proposed new taxes as part of stringent austerity measures amid a growing economic crisis.
Samir Geagea, head of the Christian Lebanese Forces, a key political party in the country, announced in a televised speech that he asked his ministers to resign and said he believes that the current 30-member national unity government is unable to carry out the necessary economic reforms.
“We have found that most components of the government want patching and painkillers, and have no intention of serious and radical reforms” for the economic crisis prevailing in the country, Geagea said.
He stressed the current situation in the country requires “exceptional and immediate steps” such as the resignation of his ministers.
Beleaguered Sunni Prime Minister Saad Hariri had given his coalition partners until Monday evening to back key reforms. Protesters hailed the move but insisted on the resignation of all members of the cabinet. They returned to the streets yesterday, keeping pressure on Hariri as a self-imposed deadline to deliver a package of badly needed reforms for the country’s crumbling economy drew near.
Young protesters carrying trash bags arrived early in central Beirut yesterday to clean debris left from festive demonstrations the day before, while groups of marchers with drums and loudspeakers returned to keep the momentum.
Iranian-backed Hezbollah dominates the current cabinet through its party and its allies. Both Hariri and his political rival, Hezbollah leader Hassan Nasrallah, presented an image that they each support the protesters’ aims but that others in government are blocking a reform agenda.
Nasrallah said it would be “a waste of time” for the current national unity government to resign since the same political factions would have to haggle over forming a new one.
“If this government resigns, we won’t have a new one for a year or two,” he said in a televised speech, pointing to perpetual political divisions that delayed forming the current cabinet for nine months. He said the deeply-indebted economy doesn’t have the luxury of time.
If Hariri, a Sunni Muslim who is traditionally backed by the West and Gulf Arab allies, resigns it would be harder for the various parties that make up the ruling coalition to form a new cabinet. A new cabinet would also likely see the Iranian-backed Hezbollah and its allies more in control, a shift that would make it nearly impossible for international donors or Gulf Arab countries at odds with Iran to offer aid or investments.
Lebanon’s political system was set up to balance power between the country’s religious sects, including Christians, Sunni Muslims, Shiite Muslims and Druze.
Many current senior politicians came to prominence during the country’s 15-year civil war that ended in 1990. The country is under pressure from the World Bank and the International Monetary Fund (IMF) to take austerity measures in return for financial support.
The small Arab country on the Mediterranean has the third-highest debt level in the world, currently standing at about $86 billion, or 150% of its gross domestic product (GDP).
International donors demand that Lebanon implement economic changes in order to get loans and grants pledged at the CEDRE economic conference in Paris in April 2018. International donors pledged $11 billion for Lebanon but they sought to ensure the money is properly spent in the corruption-plagued country.