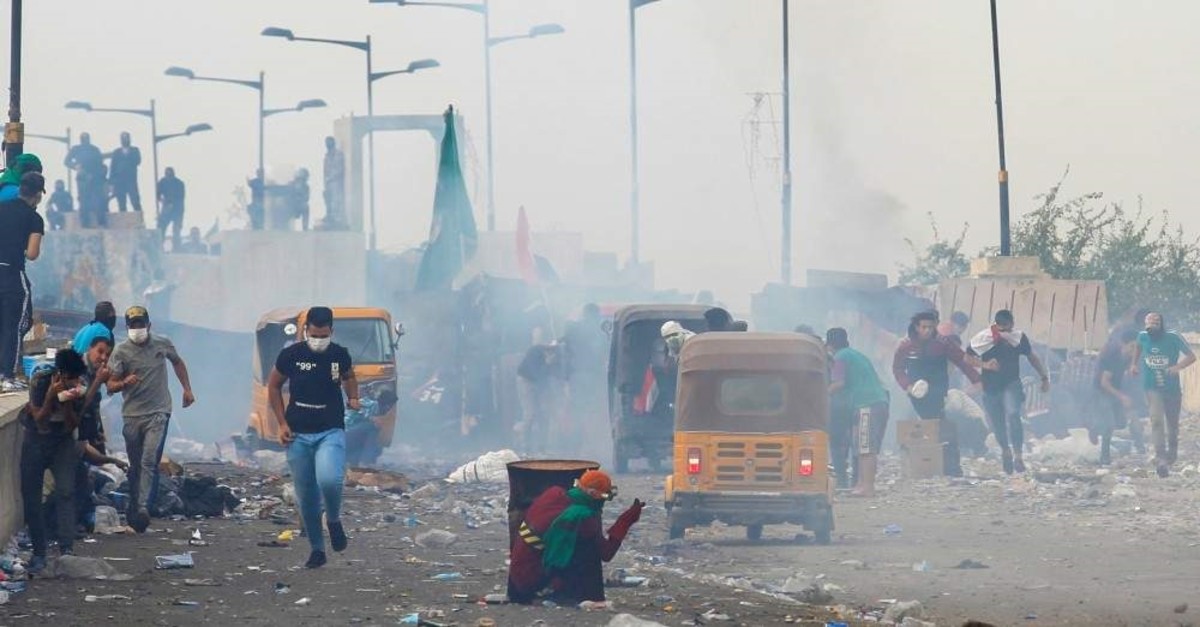 Demonstrators run from tear gas at Al Jumariyah Bridge during a protest over corruption, lack of jobs, and poor services, in Baghdad, Iraq October 27, 2019. (Reuters Photo)
by Compiled from Wire Services Oct 27, 2019 11:41 am

At least 67 Iraqis were killed and hundreds wounded in two days of protests over the weekend, as demonstrators clashed with security forces and militia groups in a second wave of protests against Prime Minister Adel Abdul Mahdi's government this month.

"I want change. I want to remove those corrupt people who sleep in the Green Zone and who fired tear gas and rubber bullets at us," said protester Fares Mukhaled, 19, who sat barefoot on the ground at the square, where some had erected tents.

Four people were killed when they were struck by tear gas canisters in Baghdad, security and medical officials said.

Seven more people died in Hilla, most when members of the Iranian-backed Badr Organization militia group opened fire on protesters who had gathered near their office.

At least 52 people were killed around the country on Friday, and more than 2,000 more wounded.

A second medical official said three protesters were shot dead by security guards when they attacked the office of a provincial official in the southern town of Nasiriyah. The town has seen especially violent protests in recent weeks and was placed under a 24-hour curfew on Friday along with the southern city of Basra.

At least 149 were killed in a wave of demonstrations earlier this month. The spontaneous, leaderless protests are directed at the political establishment that came to power after the 2003 U.S.-led invasion, which many blame for spiraling corruption and poor public services.

The protests against the Shiite-dominated government have been largely concentrated in Shiite areas. Some have also criticized Iran's influence over the country. "Iraq is free. Iran out, out!" some protesters chanted in Tahrir Square.

In the Shiite holy city of Karbala, a security official said demonstrators in a rally that took place outside the Iranian consulate also chanted for Iran to get out.

The Interior Ministry and the military issued statements Saturday saying some protesters have exploited the rallies to attack government buildings and political party offices.

The ministry said some of its members were killed as police battled violent protesters but did not give a number. The military warned that it would take necessary and legal measures to deal with those it called saboteurs.

Iraqi officials said 12 of those killed Friday died in a fire they had set when they stormed the office of a government-backed militia in the southern town of Diwaniyah. A security official said protesters torched the offices of at least three militias in southern Maysan province.

All officials spoke on condition of anonymity because they were not authorized to talk to reporters.

In Baghdad, Iraqi police had fired tear gas, rubber bullets and live shots on Friday to break up protesters who gathered in the central Tahrir Square and later tried to cross the bridge leading to the Green Zone. The protesters returned on Saturday, clashing with security forces throughout the day.

The rallies have mainly been by young, unemployed men who are demanding jobs and better services. Young women appeared among the crowd in Baghdad for the first time Saturday, some handing out water to the protesters. As sirens wailed and tuk-tuks ferried bloodied protesters to hospitals, others expressed outrage at a political establishment so willing to resort to violence.

"Our protests are peaceful, we only have flags and water bottles, but they keep firing bombs at us, firing tear gas at us," said 33-year-old demonstrator Silwan Ali. "What have we done to deserve this? What have we done? The young men who died, what did they do?" he said.

A widow who identified herself as Um Layth, or the mother of Layth, said she had asked her son and daughter to stay home because she feared for their safety. But the 60-year-old from outside of Baghdad said she came to protest, wanting a better future for her children.

"I am not afraid if I die, but I want a better future for my children," she said. "If these parties and this government stay, they will have no future."

Iran emerged as a major power broker in Iraq after the 2003 invasion and has close ties to many of its political parties. Iran also backs a number of state-sanctioned militias that were mobilized in 2014 to battle the Daesh terror organisation. Those militias have stood by the government and suggested the demonstrations are part of a foreign "conspiracy."

But Shiite cleric Muqtada al-Sadr, a nationalist whose supporters have the largest number of seats in parliament, has endorsed the protests and called on the government to resign. He has also suspended his bloc's participation in the government until it comes up with a reform program.

In a statement Saturday he called on political leaders to "keep their hands off (the people)," saying there had been enough "repression, injustice and divisions." He warned them to change course so the country does not "slide into the fires of sedition and civil war.

"Resign before you're forced to resign," he said.

After his speech, hundreds of his supporters marched toward Tahrir Square. "We are carrying our own shrouds," said Hussein Abdul-Khaleq, a 30-year old al-Sadr supporter, indicating he is not afraid to die.