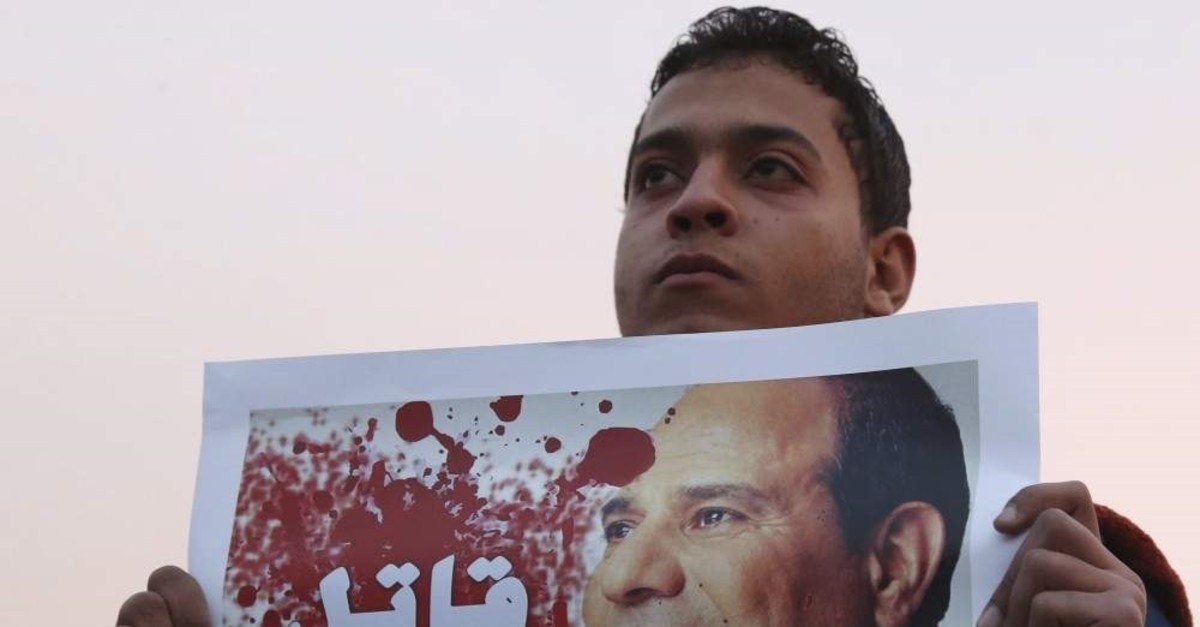 A demonstrator holds a poster of Egyptian President Abdel Fattah el-Sissi with the word ,Killer, written on it during a silent protest, Cairo, Feb. 14, 2015. (REUTERS Photo)
by Daily Sabah with Agencies
Nov 14, 2019 4:51 pm

Egypt’s human rights records under President Abdel-Fattah el-Sissi's regime faced strong criticism at the U.N, with many countries voicing alarm over detention conditions and shrinking freedoms in the country, which was recently rocked by mass protests.

The U.N. Human Rights Council in Geneva reviewed Egypt's record for the first time in four years as part of a regular examination of all 193 U.N. member states. During the so-called Universal Periodic Review, a range of countries voiced concern over serious abuses. Many voiced alarm at the allegations of torture, extrajudicial killings and enforced disappearances, as well as concerns over mass trials, dire conditions in detention, discrimination against women and the use of the death penalty. Egypt has been trying to deflect criticism of its rights record and prison conditions ahead of the U.N. review that follows a new wave of arrests.

Criticism from Western powers keen to maintain and develop security and economic ties with el-Sissi has been muted so far. While many from the Muslim world have been condemning the suspicious death of the country’s first democratically elected President Mohammed Morsi, the West kept its reaction at a minimum level with the circulation of the news of the death and nothing more. During the executions of Muslim brotherhood members, Western governments chose to remain silent in the face of unfair trials despite allegations that the Egyptian authorities used torture to obtain confessions.

In August, French President Emmanuel Macron’s close links with el-Sissi were criticized by a coalition of over 20 international human rights groups and nongovernmental organizations (NGOs) while calling him to denounce the worsening “human rights crisis” under the el-Sissi regime. France is a key exporter of arms to Egypt and other security partners in the region, particularly Libya.

After months of silence over Morsi’s killing, a U.N. report said that the Egyptian regime arbitrarily killed him, underscoring its grave human rights violations. Although this U.N. report has significance to an extent or at least has documented this arbitrary killing, it is strange that similar calls while Morsi was alive were neglected. His shocking death in an Egyptian courtroom has cast a spotlight on the dire conditions faced by political prisoners in the country. According to the Arab Organization for Human Rights, over 700 Egyptian prisoners have died as a result of medical negligence since 2011.

Protests broke out on Sept. 20 in Cairo and other cities following online calls for demonstrations against alleged corruption by el-Sissi and the military. Political pressure combined with economic deterioration has caused Egyptians to organize mass demonstrations against el-Sissi. An Egyptian businessman, Mohammad Ali, played a key role in igniting the protests through his videos on YouTube. The Arabic hashtag “el-Sissi is not my president” was trending with more than 40,000 tweets. Several Twitter hashtags have been used to rally support for the protests.

The Egyptian regime detained civil society leaders and politicians in an attempt to stop the spread of mass protests. According to Egyptian media, some 2,000 people were arrested during the protests; however, Egyptian activists claim that the number is much higher since there were hundreds of detained people who were not registered by the police. The mass arrests were seen as the biggest crackdown since the aftermath of the 2013 ouster of former President Morsi, Human Rights Watch (HRW) reported. The authorities have also blocked or interrupted various internet services and websites in a bid to stamp out any repeat of the open defiance to el-Sissi shown by protesters. Moreover, many of those killed by Egyptian security forces were members of the Muslim Brotherhood. Labeling the group as a terrorist organization, el-Sissi’s regime has detained, tortured and killed thousands of people, claiming they were linked to the group.