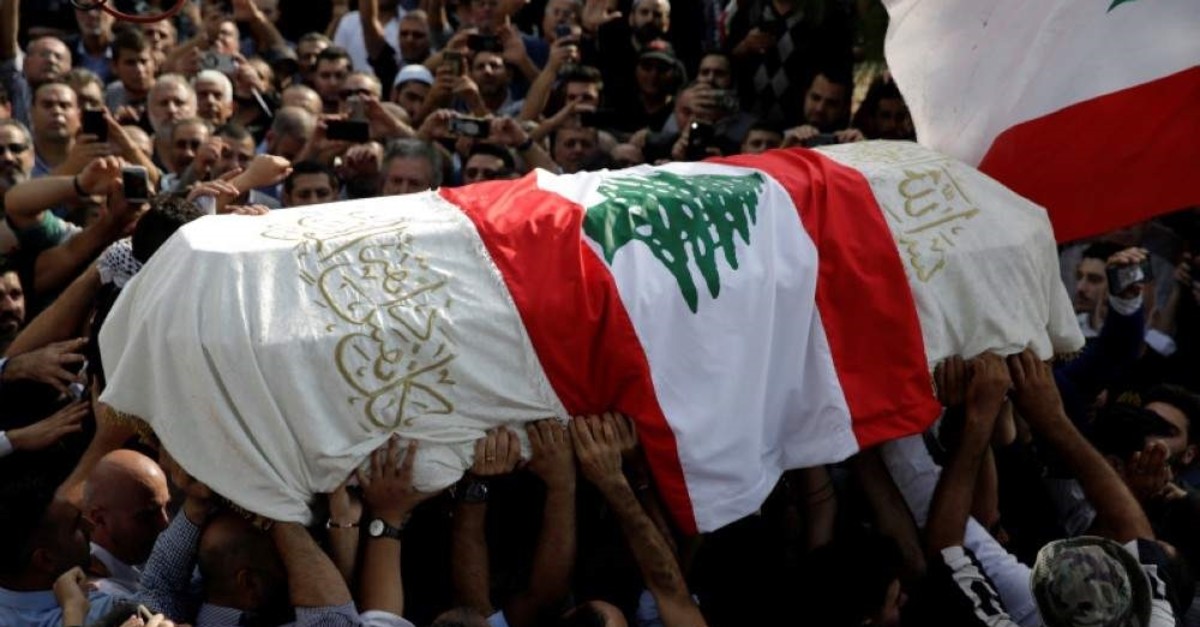 Hundreds of Lebanese on Thursday massed for the funeral of a protester who was shot dead during an unprecedented anti-graft street movement that has shaken the country for nearly a month.

Mourners from across the country flooded Choueifat, the hometown of Alaa Abu Fakhr south of Beirut, shouting "revolution, revolution".

Abu Fakhr, aged 39 and a father of three, died on Tuesday when an army officer opened fire as demonstrators blocked roads in the coastal town of Khalde south of Beirut.

He has been dubbed the "Martyr of the Revolution" by protesters who have taken to the streets since October 17 demanding the ouster of a generation of politicians they deem inefficient and corrupt.

Carrying Lebanese flags, mourners joined his family in Choueifat for a religious ceremony and then the burial.

"We are free revolutionaries and we will continue our movement," the mourners chanted as they marched behind Abu Fakhr's coffin, which was draped in the Lebanese flag.

News of his death late Tuesday was met with shock and anger among protesters in Beirut and major Lebanese cities and towns.

Demonstrators that night blocked roads and set tyres and rubbish bins ablaze, then rallied for massive nationwide protests on Wednesday during which they held up pictures of Abu Fakhr.

In the northern port of Tripoli, Lebanon's second city, a street artist has painted a commemorative mural of him on the facades of a building overlooking Al-Nour Square, the main hub of the largely peaceful protests for nearly a month.

Abu Fakhr is the second fatality since the start of the demonstrations. Another protester was shot by a man as demonstrators blocked the airport road.

The protest movement first erupted in opposition to a proposed tax on calls made via free phone apps, but it has since grown into a cross-sectarian outcry against everything from perceived state corruption to rampant electricity cuts.

Demonstrators say they are fed up with the same families dominating government institutions since the end of the 1975-1990 civil war.

The government stepped down on October 29 but stayed on in a caretaker capacity and no overt efforts have so far been made to form a new one, as an economic crisis has also battered the country.

Protesters have demanded a new government be composed of experts not affiliated with any of the traditional political parties.

But on Tuesday President Michel Aoun argued in a television interview that a government made up solely of independent technocrats would not represent the people or be able to set policies.

"Where should I look for them? On the moon?" he said, suggesting that Lebanese who did not see any decent person in power should "emigrate".

His words fuelled rage on the streets, with protesters saying they would press with their movement until their demands are met.