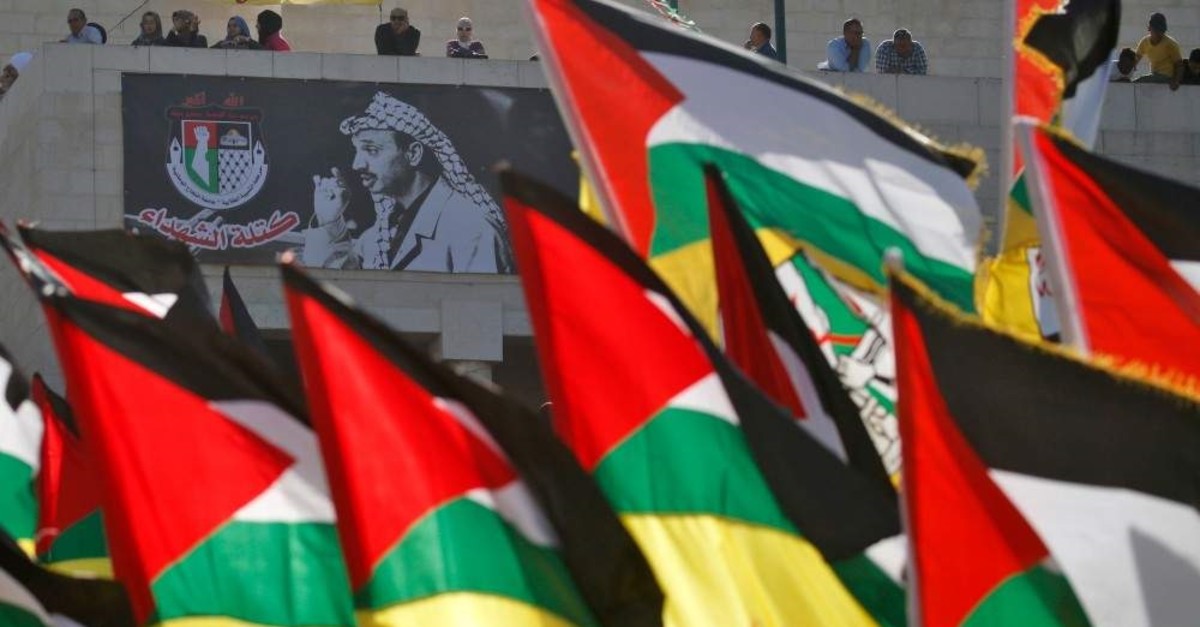 Demonstrators wave Palestinian flags next to a portrait of late leader Yasser Arafat on the 15th anniversary of his death, during a gathering in Nablus in the occupied West Bank, Nov. 12, 2019. (AFP Photo)
by Daily Sabah with Wires Nov 15, 2019 1:37 pm
Even as most of the world recognizes the Palestinian state, its people have not been able to enjoy independence and remain under Israeli occupation.
More than three decades ago, on Nov. 15, 1988, the Palestine National Council, the legislative body of the Palestine Liberation Organization (PLO), issued the Palestinian Declaration of Independence.
The announcement was made by late Palestinian leader Yasser Arafat from Algeria, in which he stated that Jerusalem is the eternal capital of Palestine. Since then 139 countries recognized independent Palestine. Several major powers, including the U.S., the U.K., France and Germany, still do not recognize the Palestinian state.
However, according to the Palestinian Central Bureau of Statistics, Israel currently occupies around 85% of the historical territory of Palestine.
The complete occupation of East Jerusalem became the largest obstacle to resolving the Palestinian-Israeli conflict. Israel fully controls the historical city, which is at the heart of the Palestinian cause. Similarly, the West Bank remains under Israeli occupation since the 1967 War, when Israel began to administrate it and build Jewish settlements, violating the international law as recognized by the United Nations and U.N. Security Council. Some 500,000 Jewish settlers currently live in some 250 illegal settlements in the West Bank.
At its 67th meeting on Nov. 29, 2012, the U.N. General Assembly voted in favor of a resolution granting Palestine the status of a non-member observer state at world organization.
The Friday celebrations come in the wake of numerous Israeli attacks on the Gaza Strip, which has been under a blockade since 2007. The aerial, land and sea blockade of the Palestinian territory lead to one of the world's worst humanitarian crises.
As Israel claims victory in its latest attack against Palestinians, its tactics of carrying out airstrikes on private homes suspected of harboring alleged militants once again comes under scrutiny over the civilian death toll. Among the 34 people killed in the two-day flareup were 16 civilians, including two 7-year-old boys and two toddlers, according to human rights investigators.
A truce announced early Thursday appeared to be breaking down less than 24 hours later, as Israel resumed airstrikes against Gaza overnight Friday.
Since Hamas gained control of Gaza in 2007, Israel has fought three wars and dozens of skirmishes against Palestinian resistance movements. While the Israeli attacks have inflicted heavy damage on Hamas and the smaller Islamic Jihad group, hundreds of civilians have also died in Israeli airstrikes.
The high civilian death toll has drawn heavy international criticism, and the International Criminal Court (ICC) in The Hague has opened a preliminary investigation into Israel’s battlefield tactics.
While the Israeli military said as many as 25 alleged militants were killed in the latest strikes, Palestinian human rights monitors said the dead included 18 militants and 16 civilians. They included three women and eight minors.
Last Update: Dec 20, 2019 1:42 am
RELATED TOPICS