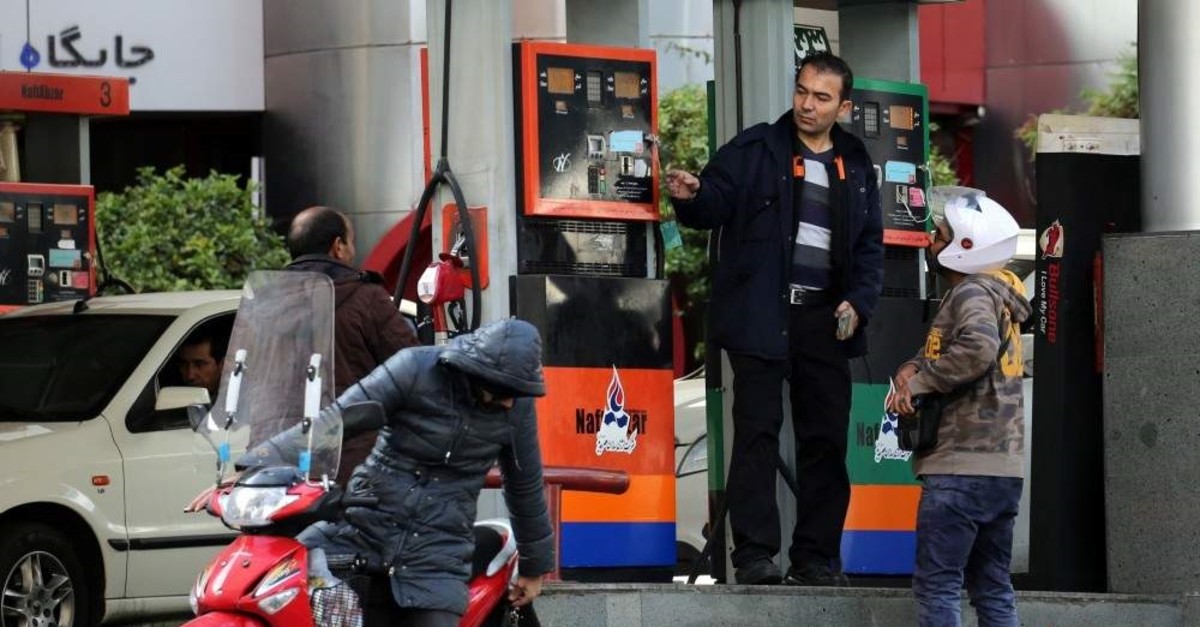 Iranians fill their vehicles at a petrol station in Tehran, on November 15, 2019. - Iran imposed petrol rationing and raised pump prices by 50 percent or more today, in a new move to cut costly subsidies that have fuelled high consumption and rampant smuggling. The Islamic republic provides some of the most heavily subsidised petrol in the world, with the pump price previously standing at just 10,000 rials (less than nine US cents) a litre. (Photo by STR / AFP)
by Compiled from Wire Services Nov 16, 2019 12:11 pm
One civilian was killed and other people injured in Iran's Sirjan, the semi-official news agency ISNA said Saturday, a day after protests in the central city over a petrol price hike.
"Unfortunately someone was killed," Sirjan's acting governor Mohammad Mahmoudabadi said in the report, adding that the cause of the death and whether "the individual was shot or not" was still unclear.
Other people were injured during the demonstrations, he said.
Mahmoudabadi emphasized that "security forces did not have permission to shoot and were only allowed to fire warning shots... which they did."
He said it was a "calm gathering" that was exploited by some who "destroyed public property, damaged fuel stations and also wanted to access the oil company's main fuel depots and set fire to them".
Their effort was thwarted by forces including the police, the Revolutionary Guards and the Basij militia, ISNA quoted him as saying.
The demonstrations, though not as widespread as the economic protests that shook the country nearly two years ago, put new pressure on the government of Iran’s relatively moderate President Hassan Rouhani.
The demonstrations on Friday night were "severe" in Sirjan in central Iran as "people attacked a fuel storage warehouse in the city and tried to set fire to it," state news agency IRNA said.
But police intervened to prevent them, it reported.
IRNA said "scattered" protests also broke out in other cities including Abadan, Ahvaz, Bandar Abbas, Birjand, Gachsaran, Khoramshahr, Mahshahr, Mashhad and Shiraz.
They were mostly limited to blocking traffic and were over by midnight, the news agency added.
Iran imposed petrol rationing and raised pump prices by at least 50 percent on Friday, saying the move was aimed at helping citizens in need with cash handouts.
The measure was expected to bring in 300 trillion rials ($2.55 billion) per annum, the head of the country's Planning and Budget Organization, Mohammad Bagher Nobakht, said on state television.
About 60 million Iranians in need would get payments ranging from 550,000 rials ($4.68) for couples to slightly more than 2 million rials ($17.46) for families with five members or more, he said.
Under the scheme, drivers with fuel cards will pay 15,000 rials (13 US cents) a liter for the first 60 liters of petrol bought each month, with each additional liter costing them 30,000 rials.
Fuel cards were first introduced in 2007 with a view to reforming the subsidies system and curbing large-scale smuggling.
Iran's economy has been battered since May last year when President Donald Trump unilaterally withdrew the United States from a 2015 nuclear agreement and reimposed crippling sanctions.
The rial has plummeted in value against the U.S. dollar, inflation is now running at more than 40 percent and the International Monetary Fund expects Iran's economy to contract by 9% this year and stagnate in 2020.
President Hassan Rouhani said on Saturday that currently, 75% of Iranians were "under pressure" and the extra revenues from the petrol price hike would go to them, and not the treasury.
Rouhani had tried to hike fuel prices in December but was blocked by parliament in the wake of protests that rocked Iran for days.
The speaker at the time ruled out the move as unpopular and said it was "not in the interests of the country."
The rationing and price hike come at a sensitive time as Iran prepares for a parliamentary election in February.
According to Nobakht, the price hike was agreed by the High Council of Economic Coordination, made up of the president, parliament speaker and judiciary chief, implying it had received the system's approval across the board.
Rouhani in his first term had voiced opposition to the petrol dual-price regime adopted by his predecessor, Mahmoud Ahmadinejad, saying "it caused corruption and that is why we made a unified rate" in a 2015 tweet.
His administration also scrapped Ahmadinejad's fuel card scheme, only to revive it this year while still denying rumours it was a precursor to petrol rationing and price hikes.
Last Update: Dec 20, 2019 1:43 am
RELATED TOPICS