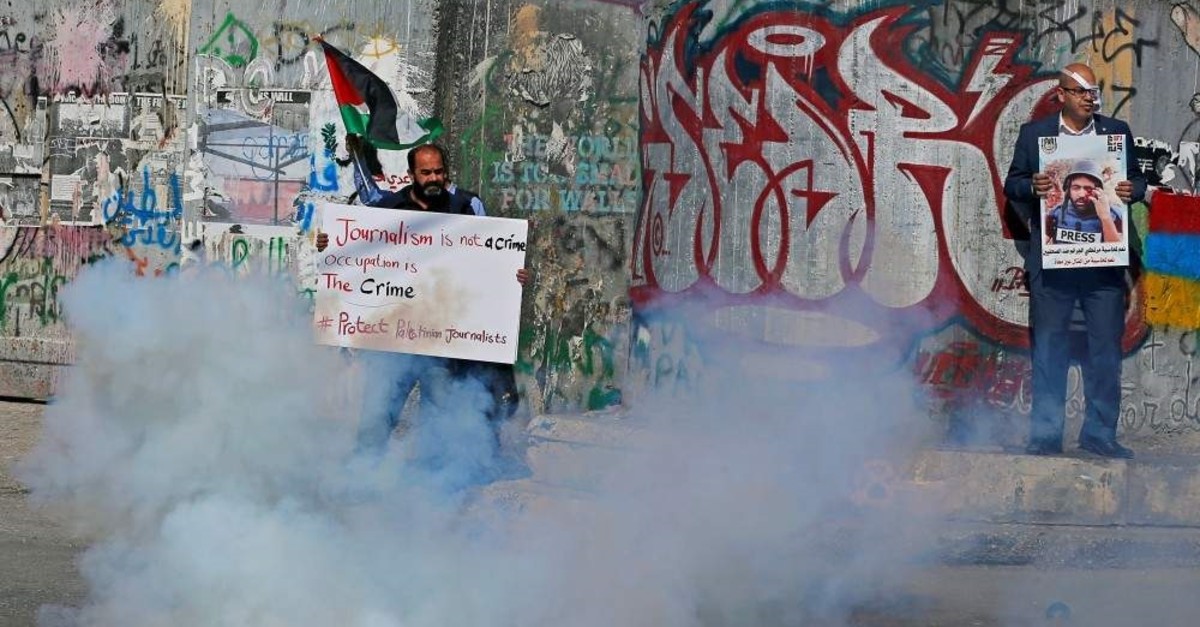 A demonstrator holds a sign during a protest to show solidarity with Palestinian journalists, Bethlehem, Nov. 17, 2019. (Reuters Photo)
by Daily Sabah with Agencies Nov 18, 2019 4:29 pm

In solidarity with their colleagues who lost their lives or were wounded while working, Palestinian journalists have launched a campaign to defy the frequent abuse and violent attacks by Israeli forces

Palestinian journalists voiced their solidarity with their colleagues who faced rights violations by Israel in the occupied territories, including Gaza and the West Bank, protesting Israeli violence by wearing eye patches over the weekend. Palestinian freelance photographer Muath Amarneh has been in an Israeli hospital since he lost vision in one eye after apparently being struck by Israeli fire while covering a demonstration last week in the occupied West Bank. A video from the incident posted online showed Amarneh being carried off by other journalists while bleeding from his left eye. The demonstrators were protesting what they say were confiscations of village land by the Israeli military.

Amarneh's case has drawn significant attention among Palestinians and in several Arab countries, with journalists voicing solidarity by posting photos on social media of themselves wearing eye patches. Israeli paramilitary border police fired tear gas Sunday at Palestinian journalists who held a protest in solidarity with Amarneh in the city of Bethlehem.

Palestinian journalists frequently report abuse by Israeli security forces, but have little to no recourse for redress. Defying international law, Israel forces committed 600 rights violations against Palestinian journalists between October 2018 and October 2019 in the occupied West Bank, east Jerusalem and the Gaza Strip. According to a report released by the Palestinian Journalists’ Syndicate (PJS), Israeli forces shot 60 journalists who suffered serious wounds; some of them were still suffering at the time of the report's release. Some 43 journalists were hit by sound grenades directly thrown at them by Israeli occupation forces, the report said. “More than 170 journalists were beaten, detained or banned from coverage,” the findings revealed. The report also disclosed that 10 journalists were detained during this period, raising the number of journalists inside Israeli jails to 18.

In September, the U.N. underscored the Israeli violations against Palestinian journalists, stating that 30 journalists were injured by Israeli forces during the Gaza border protests following the adoption of U.N. Resolution 40/13 on March 22 this year over rights violations in the occupied Palestinian territories.

The Great March of Return, a key flash point for violence, began on March 30, 2018 when hundreds of thousands of Palestinian demonstrators converged on the buffer zone separating Gaza from Israel, calling for the easing of an Israeli blockade of the territory and recognition of the right of Palestinian refugees there to return home to Palestinian territories occupied by Israel. Israel has responded to the rallies with deadly force. U.N. Human Rights High Commissioner Michelle Bachelet said Israel used tear gas, rubber-coated bullets, water cannons and sound devices, as well as regularly firing live ammunition, against the demonstrators.

Since the Gaza rallies began in March last year, nearly 270 Palestinians have been killed and thousands more wounded by Israeli troops deployed near the buffer zone. Israel was criticized by a U.N. human rights body for its killing of protesters in Gaza and for its treatment of Palestinians, declaring it a “war crime” under the Statute of Rome. The high casualty toll triggered diplomatic backlash against Israel and new charges of excessive use of force against unarmed protesters.