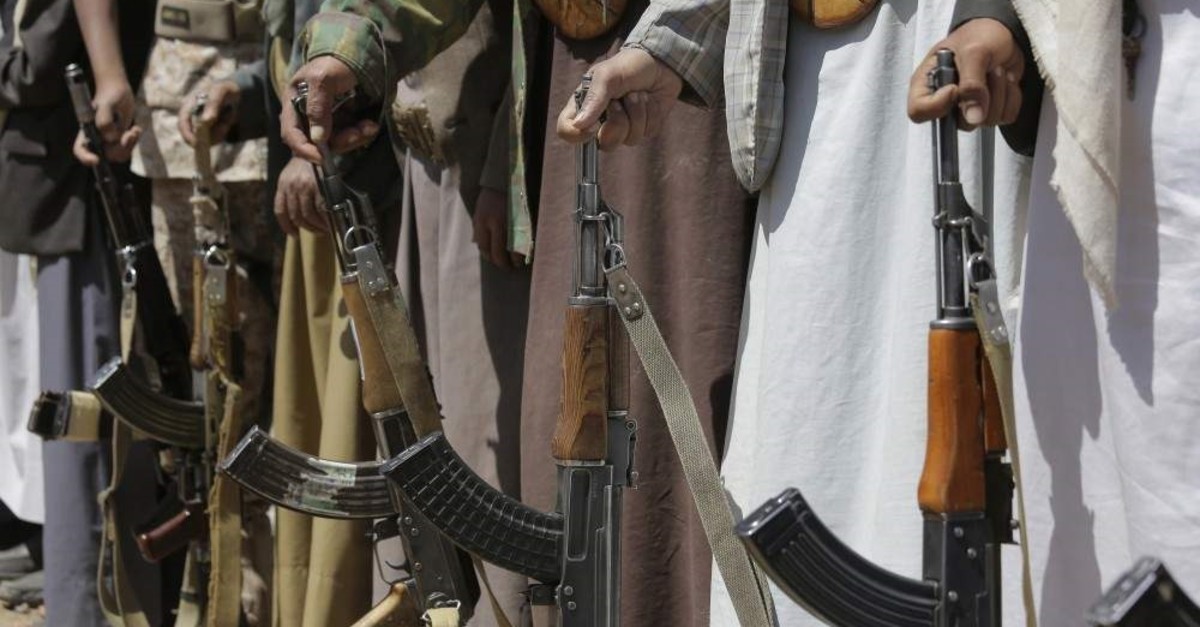 In this file photo dated Sept. 21, 2019, Shiite Houthi tribesmen hold their weapons during a tribal gathering showing support for the Houthi movement, in Sanaa, Yemen. (AP Photo)
by Nov 19, 2019 12:10 pm
Two out of three vessels seized by Yemen's Houthi rebels on the weekend are South Korean, Seoul officials said Tuesday, as are two out of 16 people captured.
The vessels — a South Korean dredger being towed by one South Korean and one Saudi-flagged tug — were seized by the Houthis at the southern end of the Red Sea on Sunday, according to South Korea's Foreign Ministry.
The incident follows a lull in Houthi attacks on Saudi Arabia as one Riyadh official said the kingdom had established an "open channel" with the Iran-backed rebels.
A total of 16 crew members, two of them South Koreans, were taken to the port of Salif port where they were being held by the Houthis, the ministry added.
"All of our citizens... are healthy and safe," officials said in a statement.
Seoul has sent the South's navy ship Cheonghae, which had been on anti-piracy standby off the coast of Oman, to waters near where the accident took place.
"We are doing our very best for the early release of our citizens," the statement added.
The head of the rebels' Supreme Revolutionary Committee, Mohammed al-Houthi, acknowledged the Houthis had seized a vessel in what he called a "suspicious case" off the Yemeni coast.
"The Yemeni coast guard is doing its job to determine whether it... belongs to the aggressors or to South Korea," he said on Twitter. "If it is for South Korea, they will be released after legal procedures... we assure everyone not to worry about the crew."
A year after the Iran-backed Houthis seized Sanaa, Saudi Arabia, the United Arab Emirates and their allies intervened in the conflict in support of President Abedrabbo Mansour Hadi. Since 2015, tens of thousands of people — most of them civilians — have been killed in a conflict that has triggered what the United Nations has described as the world's worst humanitarian crisis.
Last Update: Dec 20, 2019 1:47 am
RELATED TOPICS