Over 700 Palestinian children arrested by Israeli forces in 2019 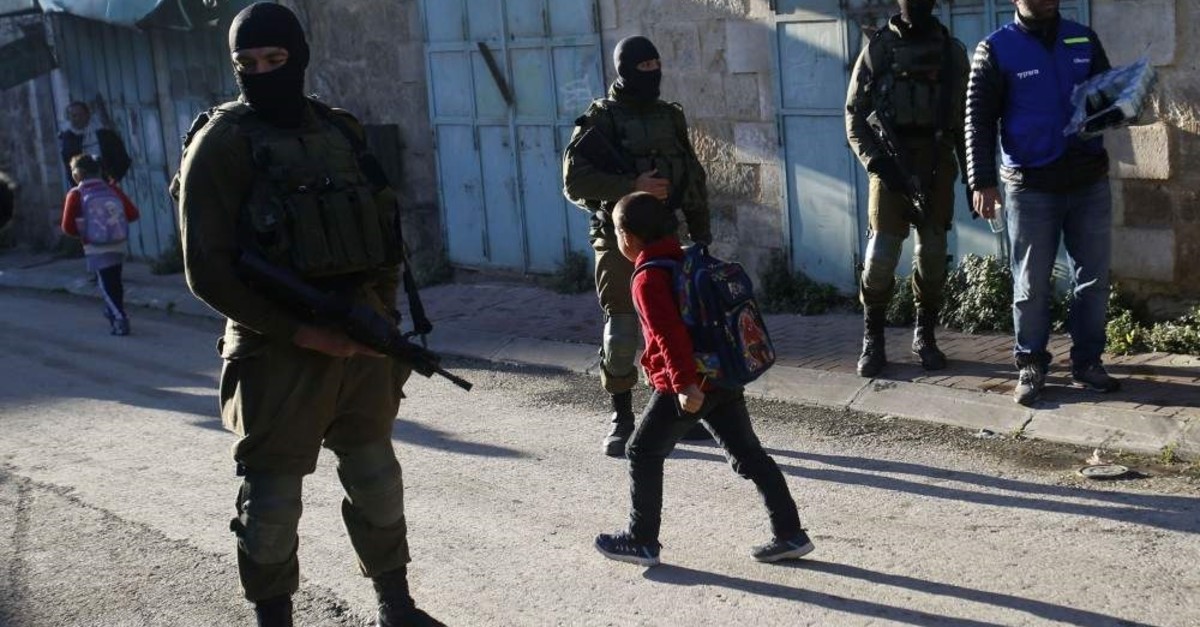 Palestinian children walk past Israeli soldiers on their way to school, Hebron, Feb. 12, 2019. (AP Photo)
by Daily Sabah with AA Nov 21, 2019 4:59 pm
Israeli forces arrested around 745 Palestinian children in the first 10 months of the current year, according to a nongovernmental organization (NGO), revealing ongoing Israeli violence in the occupied territories.
In an annual report, the Palestinian Prisoners Society (PPS) said that the children arrested by Israel experienced numerous rights violations. They are often taken away from their houses usually late at night under harsh conditions, the report said. It noted that arrested children are deprived of their right to education, a clear violation of the Declaration of the Rights of the Child, and some of the children are denied family visits and proper medical treatment. According to the report, nearly 200 children are currently imprisoned in various Israeli detention centers. The NGO called on International human rights organizations, including UNICEF, to make more efforts to provide protection for Palestinian children from Israel's arrests and harassment.
Israeli treatment of Palestinian children in military detention has become a major area of concern for the international community. International human rights groups have heavily criticized Israel’s handling of Palestinian teen hero Ahed Tamimi, placing the Israeli military court system that Palestinian youth face on the West Bank under scrutiny. According to another report released last July by the Palestinian Prisoners Center for Studies, there was a 30% increase in the number of children arrested when compared to the same period in 2017 when 380 children were arrested by Israeli forces.
According to a report released by the Al-Mezan Center for Human Rights, hundreds of Palestinian children have been subjected to Israeli violence since the Great March of Return started last year, when hundreds of thousands of Palestinian demonstrators converged on the buffer zone separating Gaza from Israel. During the same period, 17 children were detained by Israeli forces during protests. The report also revealed that there has been an increase in the number of Palestinian children killed and injured by Israeli forces, while pointing out the ongoing systematic violations of human rights in the Gaza Strip.
Last Update: Dec 20, 2019 1:50 am
RELATED TOPICS