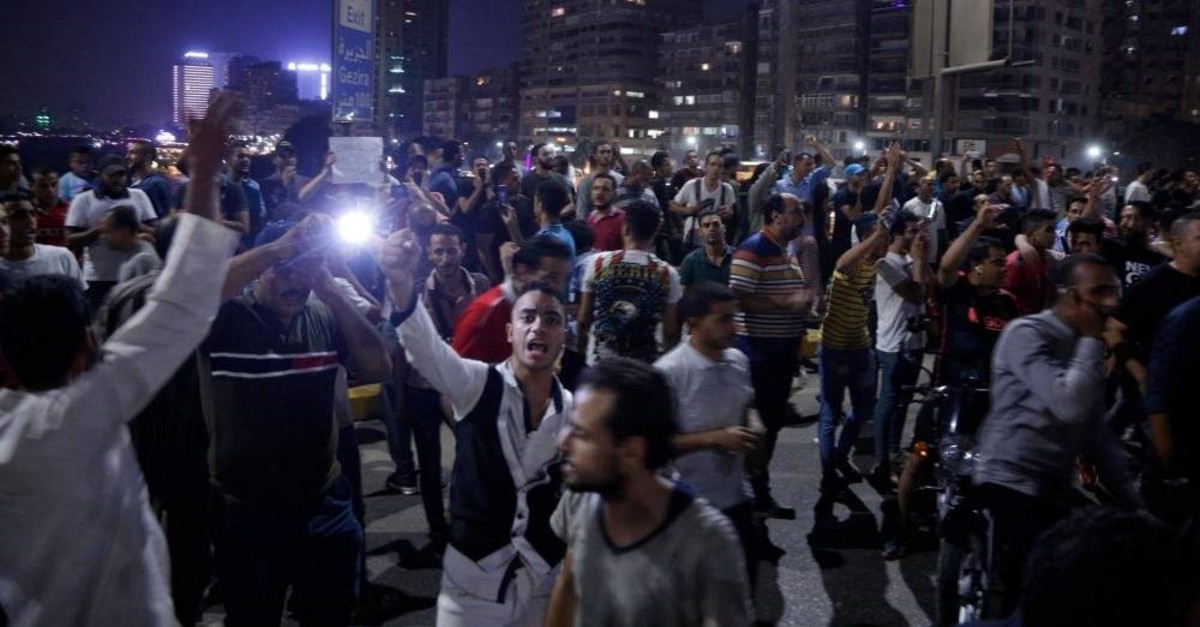 Egyptian protesters shout slogans as they take part in a protest calling for the removal of President Abdel-Fattah el-Sissi, Cairo, Sept. 20, 2019. (AFP Photo)
by Daily Sabah with AP Nov 27, 2019 7:41 pm

Egypt has witnessed an unprecedented political crackdown, silencing critics and jailing thousands since the general-turned-president came to power in 2014 after a bloody coup to remove the country’s first democratically elected President Mohammed Morsi.
The Egyptian authorities have launched a relentless crackdown on dissent, killing hundreds of Morsi's supporters and sending thousands to prison for inciting violence. Activists consider the repression the worst in Egypt's modern history.
The latest protests broke out on Sept. 20 in Cairo and other cities following online calls for demonstrations against alleged corruption by el-Sissi and the military.
According to Egyptian media, some 2,000 people were arrested during the protests; however, Egyptian activists claim that the number is much higher since there were hundreds of detained people who were not registered by the police. The mass arrests were seen as the biggest crackdown since the aftermath of the 2013 ouster of Morsi, Human Rights Watch (HRW) reported.

During protests, the SSSP played a critical role in sweeping up thousands of people on charges of terrorism, the report said, while the country’s security forces carried out a harsh crackdown to stamp out anti-government protests.
The prosecution agency renews people’s detentions for months and years without evidence, denying them access to lawyers and a fair chance to appeal, it added.
Amnesty said SSSP investigations into allegations of torture and enforced disappearance by the police intelligence division amount to a whitewash. The SSSP routinely buries evidence of police abuse and gives credence to confessions extracted through torture, it said, drawing on court documents and interviews with dozens of witnesses.
Among those killed by Egyptian security forces were members of the Muslim Brotherhood. Labeling the group as a terrorist organization, el-Sissi’s regime has detained, tortured and killed thousands of people, claiming they were linked to the group.

Under el-Sissi, Egypt has seen a “meteoric rise” in cases prosecuted by SSSP, according to Amnesty. The report drew attention to the expansion of the branch’s covert role since a court declared indefinite administrative detention unconstitutional in 2013.

Egypt’s human rights records under el-Sissi's regime faced strong criticism at the U.N. earlier this month, with many countries voicing alarm over detention conditions and shrinking freedoms in the country.
After only muted criticism or long silences from Western countries, the U.N. Human Rights Council in Geneva reviewed Egypt's record for the first time in four years as part of a regular examination of all 193 U.N. member states. The council voiced alarm at the allegations of torture, extrajudicial killings and enforced disappearances, as well as concerns over mass trials, dire conditions in detention, discrimination against women and the use of the death penalty.