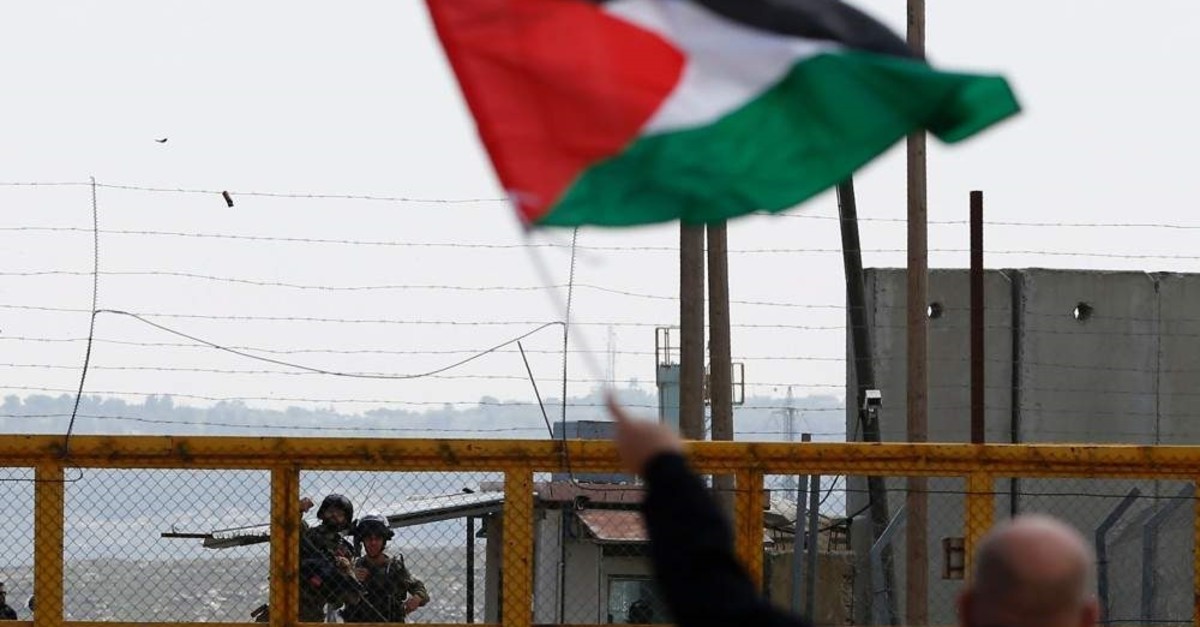 A protester waves a Palestinian flag in front of Israeli security forces outside the compound of the Israeli-run Ofer prison, the occupied West Bank, March 30, 2016. (AFP Photo)
by Daily Sabah with AA
Dec 04, 2019 4:33 pm

More than 30 Palestinian prisoners went on an indefinite hunger strike, underscoring the ongoing suffering, torture and the lack of medical care in Israeli prisons

Some 33 Palestinian prisoners launched an indefinite hunger strike on Wednesday in a prison in southern Israel, protesting the deteriorating living conditions and the escalating repressive measures by the prison administration, according to the Palestinian Prisoners’ Club.

"Prisoners in Ashkelon prison informed the prison administration of their intention to start an open-ended hunger strike until their demands are met," Qadri Abu Bakr, head of the Palestinian Authority Prisoners' Affairs Commission, said.
Abu Bakr told Anadolu Agency (AA) that the prisoners were subjected to repressive measures and that their belongings were damaged by the authorities.
Several prisoners’ rights groups reported that the Israeli prison administration has escalated repressive policies against Palestinian prisoners since the beginning of this year.

Israel's perpetual violations of Palestinians' basic rights in its prisons, including torture, repression and assaults have long been under the spotlight as the occupation forces have arrested around 2,800 Palestinians in the occupied territories so far this year, with the total number of detainees in prisons amounting to 5,500, including minors and women.
More than 200 Palestinians have lost their lives in Israeli prisons since 1967 as a result of torture, lack of medical care or gunshot wounds, Palestinian human rights organizations announced in 2018.
In a joint statement, the Palestinian Prisoners' Association, Prisoners of Conscience and the Human Rights Protection Organization said 216 Palestinians have lost their lives in Israeli prisons since 1967. Seven were shot, 72 were tortured to death and 59 died due to lack of medical care.
The statement highlighted the fact that Palestinians in Israeli prisoners were being subjected to "inhumane" treatment, including physical and psychological torture. Some 60% of the prisoners have suffered "brutal physical assaults." The statement also urged U.N. Secretary-General Antonio Guterres to launch a special committee to probe Palestinian deaths in Israeli prisons.

Israeli treatment of Palestinian children in military detention has become a major area of concern for the international community. According to a report released by the al-Mezan Center for Human Rights earlier this month, hundreds of Palestinian children have been subjected to Israeli violence since the Great March of Return protests started last year when hundreds of thousands of Palestinian demonstrators converged on the buffer zone separating Gaza from Israel.
During the same period, 17 children were detained by Israeli forces during protests. Israel has responded to the rallies, still held every Friday, with deadly force, killing more than 220 Palestinians and injuring thousands more. According to a report released last July by the Palestinian Prisoners Center for Studies, the number of children arrested increased 30% when compared to the same period in 2017 when 380 children were arrested by Israeli forces.