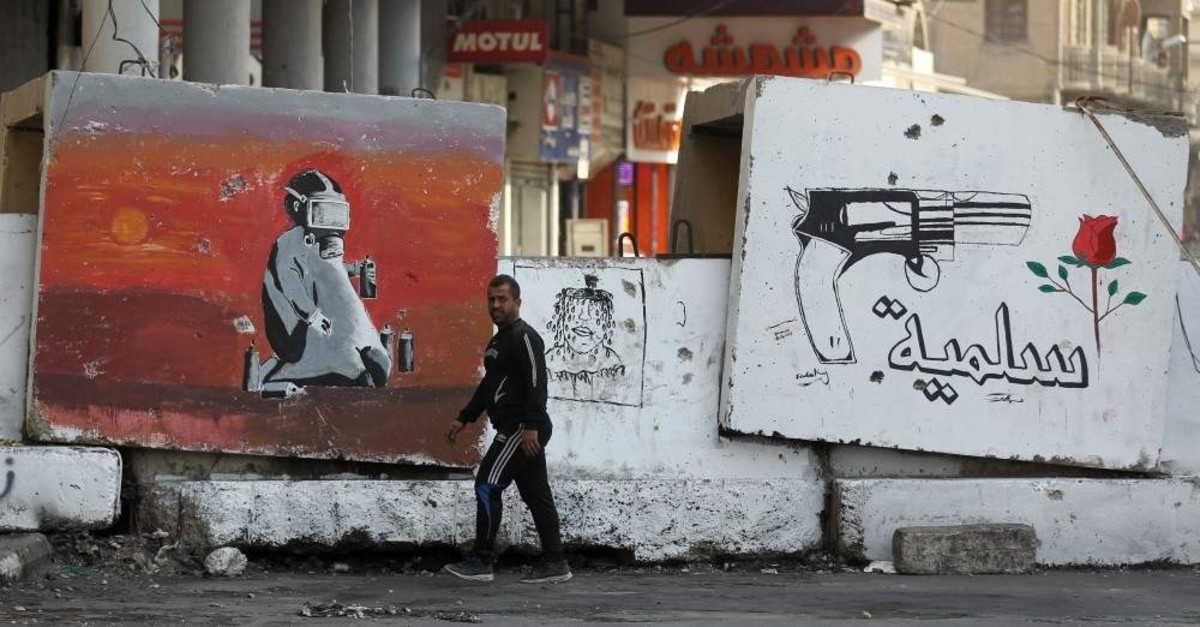 A view of a concrete barrier part of a barricade with a graffiti mural depicting a gun before a flower and text in Arabic reading ,peaceful,, Baghdad, Dec. 25, 2019. (AFP Photo)
by Yusuf Selman İnanç Dec 26, 2019 2:43 pm

Despite the fact that the Iraqi government made certain steps to meet demands including a change of the electoral law, protesters are unhappy since they want fundamental change and to see the ruling elite go

Iraq has been dragged into political chaos as demonstrations are still taking place and a solution for the prime minister post has not yet been found. Iraqis were demanding the resignation of Prime Minister Adel Abdul-Mahdi, and he did so this month, but, now a new candidate, acceptable to each side as a replacement, is missing. While the Iranian-backed bloc in the Iraqi parliament supports Basra governor Asaad al-Eidani, other parties and demonstrators are unhappy with the possibility that he would be appointed as prime minister. This is because the demonstrations, which largely started in the oil-rich Basra province, also targeted Eidani, who is backed by Iran.

The Iranian-backed Fatah bloc, which includes names from the Popular Mobilization Units, proposed that Eidani should take the prime minister post. However, Eidani seems to be among the most unwanted names for the Iraqi protesters, who claim that Iran's interference in Iraq's domestic policies has been deteriorating the country. Following his nomination Wednesday, thousands of people took to the streets, protesting the nomination. In response, security forces used bullets, but no casualties were reported immediately. However, the Fatah bloc is able to propose the candidate that could enable him to reach the post because the bloc holds the largest number of seats in the Iraqi Parliament. Another candidate would be the outgoing education minister, Qusay al-Suhail. He is not among the names that Iraqi demonstrators want due to his ties with Iran. Even so, al-Shuail appeared to be more acceptable than Eidani. Yet, he turned down his nomination with the claim that the conditions were not favorable.

The resignation of Abdul-Mahdi and the change of the electoral laws are not enough for meeting the protesters' demands. First, unlike the Arab Spring, the protesters' demand is not limited to the ousting of autocratic leaders. They want the entire ruling elite to abandon their positions and open the way for young people. Second, their demands go beyond the economic situation. They regard the economic crisis and deterioration as a result of Iraq's erroneous foreign policy. At this point, anger addresses Iran, which has a great influence in the country.

Even if the Iraqi government makes further steps and replaces the whole cabinet, the protesters will not be satisfied. The young people in the streets are demanding a greater and more fundamental change.