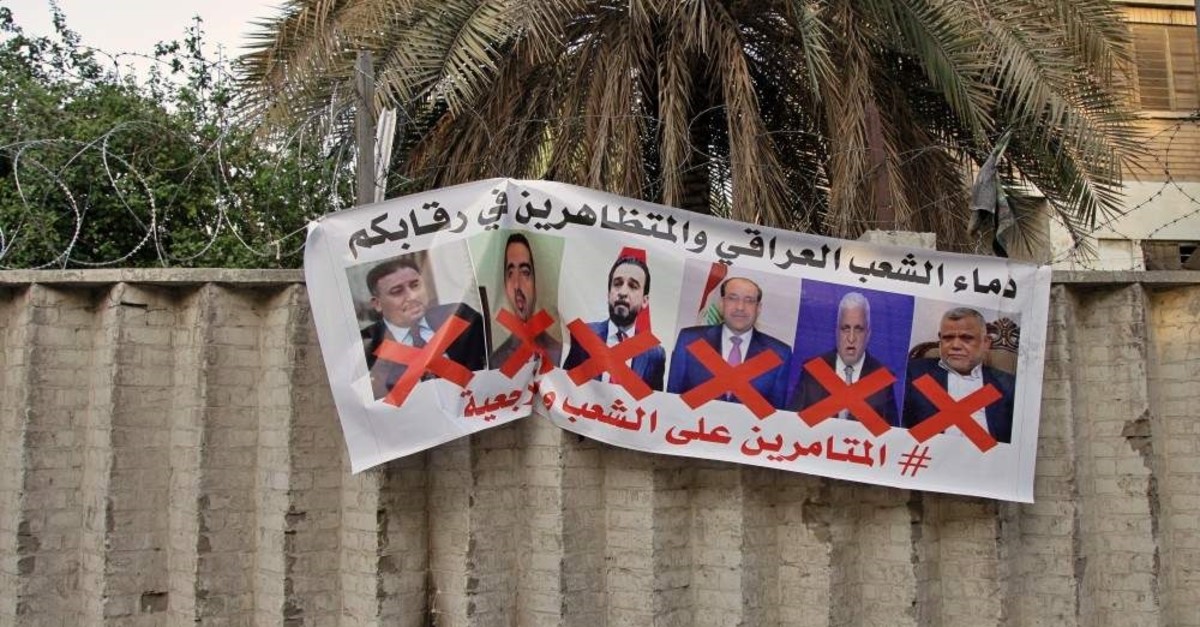 A poster with defaced pictures of Iraqi politicians and Arabic that reads, ,the blood of the protesters and the Iraqi people is on your necks, the conspirators on the people and the religious authority,, it hung on the wall near Tahrir Square, Baghdad, Dec. 26, 2019 (AP Photo)
by Associated Press Dec 27, 2019 9:19 pm

Iran-supported groups in Iraq blasted the country's president Friday over his refusal to designate a prime minister candidate nominated by the Tehran-backed bloc in parliament. Groups affiliated with the Fatah bloc accused President Barham Salih of implementing an American will to pull the country into chaos. Salih has said he refused to appoint Asaad al-Eidani because of broad opposition by the anti-government protest movement. Protesters poured into the streets Wednesday demanding an independent candidate.

The decision by Salih on Thursday to not appoint al-Eidani and his offer to resign threatened to plunge the country into further political uncertainty amid nearly three months of unprecedented mass protests. A statement issued by the Hezbollah Brigades, or Kataeb Hezbollah, criticized Saleh's move as "suspicious" adding that he "violated the constitution by refusing to carry out his duties by naming the person who was chosen by the parliament's largest bloc."

In a sign of the country's deep divisions, Iraq's most powerful religious authority, Grand Ayatollah Ali al-Sistani, did not give his usual Friday sermon this week and no reason was given for the move although it appeared that the cleric did not want to take sides. Al-Sistani's representative, Ahmed al-Safi, gave only a religious sermon Friday.

Concentrated in Baghdad and the mostly Shiite-inhabited south, the protests have since evolved into an uprising against Iran's political and military influence in the country. Protesters issued a statement Friday saying that "the blocs of corruption" are doing all they can so that the candidate for the prime minister's post is part of the "detestable sectarian sharing."